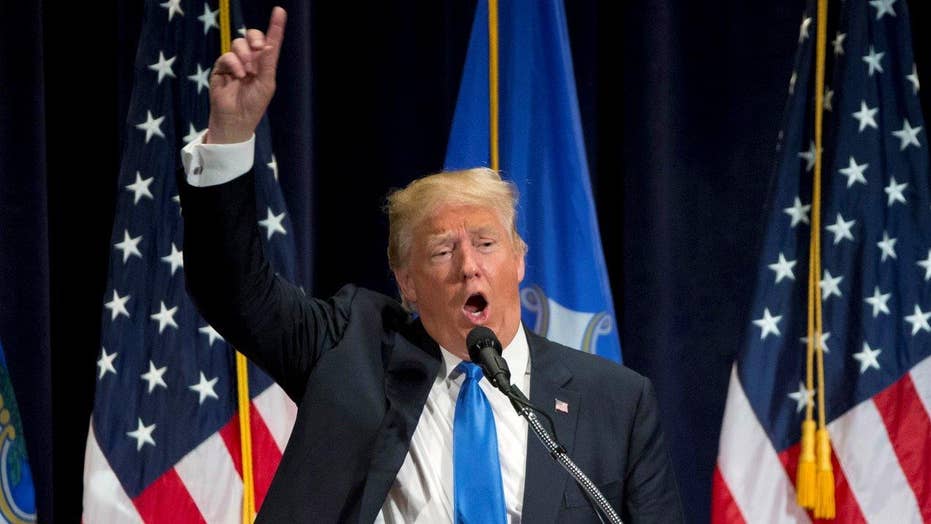 Donald Trump showed no signs Saturday of “toning it down” on the campaign trail, attacking the Republican establishment and presidential rivals -- after attempts to be “more presidential” and assurance from a top adviser a day earlier that the GOP front-runner would show more restraint.

Trump said at a rally in Bridgeport, Conn., that “being presidential is easy” but boring.

“I have to keep you people entertained and awake,” Trump told the crowd of about 1,000. “Have you seen Hillary Clinton using a teleprompter … . People starting yawning. It’s a disaster.”

He also returned to calling Clinton, the Democratic presidential front-runner, “Crooked Hillary” and the argument that the Washington Republicans’ system of awarding delegates for primary and caucus wins is “rigged.”

Trump appeared unwilling to spare anybody on Saturday, suggesting GOP rival Ohio Gov. John Kasich change the spelling of his last name so that it could be more easily pronounced. And he returned to calling his closest primary rival, Texas GOP Sen. Ted Cruz, “Lyin’ Ted,” after referring to him as “Senator Cruz” after Trump’s commanding victory Tuesday in the New York primary.

“I sorta don’t like toning it down,” Trump said Saturday.

On Saturday, Democratic candidate Vermont Sen. Bernie Sanders was in Baltimore, where he continued to criticize Clinton for being supported by Wall Street and million-dollar PACs, or political action committees.

He was scheduled to make a stop in Wilmington, Del., late Saturday, while Clinton visited the Orangeside diner in New Haven, Conn., where she largely focused on such economic issues as family leave, equal pay for women and increasing the minimum wage to $15 hourly.

“We need paid family leave because it's the most important part of anyone's life,” she said. "Equal pay? We shouldn't be talking about it in 2016. It's almost embarrassing.”

Kasich was in Rhode Island, while Cruz, the most conservative in the GOP field, was in Indiana, ahead of that state’s May 3 primary.

Cruz finished third in the New York primary and is not projected to do well Tuesday, according to most polls.

Those polls show Trump with double-digit leads in Tuesday’s races.

Clinton also leads in all five states but by single-digit margins in Pennsylvania and Rhode Island, according to several polls.

Trump will look to increase his delegate count toward getting 1,237 of them to secure the GOP nomination before the party’s convention in July. He now has 845 pledged delegates, followed by Cruz with 559 and Kasich with 148.

Clinton has 1,428 pledged delegates, compared to 1,153 for Sanders, toward securing their party’s presidential nomination with 2,383 delegates.

Earlier Saturday, at a rally in Waterford, Conn., Trump made similar, sarcastic remarks about appearing more presidential, a move his campaign and wife Melania apparently have urged him to make.

Trump’s new senior adviser, Paul Manafort, privately assured Republican National Committee officials at their spring meeting in Florida this week that the candidate knows he needs to tone down the vitriol and that Trump is merely “projecting an image.”

“The part that he’s been playing is now evolving,” Manafort said. “The negatives will come down. The image is going to change.”