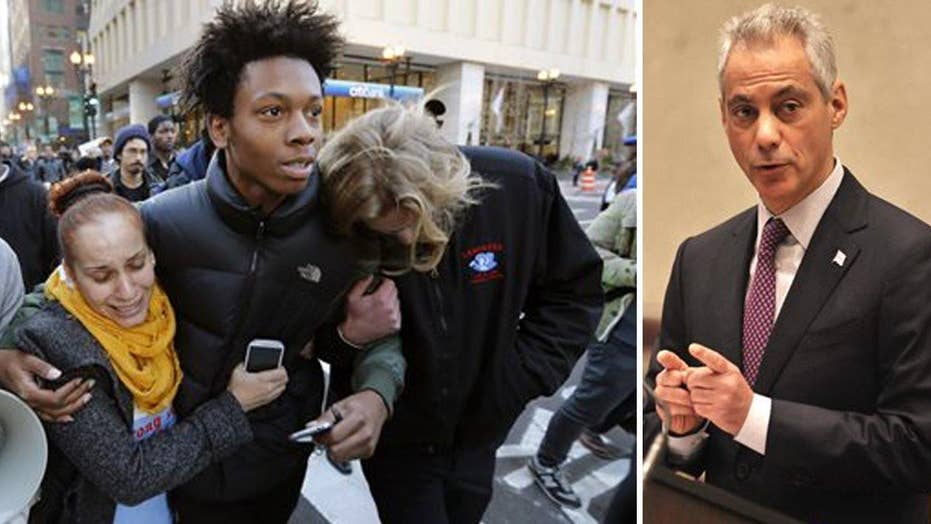 La Shawn Ford's proposal would allow a recall election to be initiated by a petition with signatures totaling at least 15 percent of the total votes cast in the previous mayoral election, with at least 50 signatures from each of Chicago's 50 wards, according to Fox 32 Chicago. Potential challengers would need 12,500 signatures to get on the prospective ballot.

Ford, a Democrat like Emanuel, faces a tough road to get his plan to pan out. He would need approval from both chambers of the Illinois legislature, which are controlled by Democrats.

Ford told WBBM-TV that people have lost confidence in Emanuel.

Protesters called for Emanuel to resign Wednesday night after he apologized for the shooting death of 17-year-old Laquan McDonald at the hands of a white Chicago police officer and vowed several reforms.

"I take responsibility for what happened because it happened on my watch. And if we're going to fix it, I want you to understand it's my responsibility with you," Emanuel said. "But if we're also going to begin the healing process, the first step in that journey is my step.

Protesters formed a circle in the middle of Michigan Avenue and appeared to be headed for a bridge near the Magnificent Mile, which was the site of a Black Friday protest last month. Some in the crowd shoved officers before police let them through.

Activists chanted “16 shots and a cover-up” in reference to the video showing Officer James Van Dyke shooting McDonald, who appeared to be walking away from officers. Van Dyke is charged with first-degree murder.

Emanuel spoke of black residents' mistrust of Chicago police, saying it's unacceptable that some officers treat black people -- particularly young men -- differently than they do whites, and that there are parents in Chicago who feel they must warn their children to be wary of officers.

"It is not something I would ever tell my children. That's unacceptable," Emanuel said, later adding that "no citizen is a second-class citizen in the city of Chicago."

Alderman Leslie Hairston, who is black, gave an impassioned speech in support of Emanuel's comments about people being treated differently because of their skin color.

She said she was "denied access" to the council's chamber Wednesday until she produced ID -- "even though my picture was on the wall." Her white colleagues walked in without having to show ID, said Hairston, whose ward encompasses parts of the South Side, including the University of Chicago.

"Your speech touched me because of what happened to me trying to come to work today to do my job," she told the mayor.

McDonald’s death and the subsequent release of more police-involved shootings has forced Emanuel to backtrack on comments he made earlier this week about a federal investigation into the Chicago Police Department.

Emanuel initially called the probe “misguided” because the U.S. Attorney’s Office was already examining the McDonald shooting. Emanuel later said he welcomed such an investigation, which was announced by the Justice Department Monday and will look to determine whether there are patterns of racial disparity in the police department's use of force.

Another video showed an inmate being dragged out of his cell by his handcuffed wrists. While a police review board previously found the officers' actions justified, Emanuel said he did not see how the treatment of the man -- who later died following a reaction to an antipsychotic drug -- could "possibly be acceptable" and said he did not consider the investigation closed.