Minnesota Democrat Ilhan Omar is facing backlash after her speech at a Muslim rights group’s event where she described the September 11, 2001 terror attacks as 'some people did something.'

Minnesota Democratic Rep. Ilhan Omar, in a newly resurfaced clip of an old interview, joked about people saying "Al Qaeda" and "Hezbollah" in a severe tone -- while noting nobody says words like "America" that way.

“When I was in college, I took a terrorism class. ... The thing that was interesting in the class was every time the professor said ‘Al Qaeda’ his shoulders went up,” Omar said during an interview from 2013 when she was an activist within the Somali community, chuckling as she imitated the professor saying "Al Qaeda" and "Hezbollah."

Omar went on to contrast the way people say the names of terror groups with how they pronounce the names of western powers:

Omar made the remarks during an interview on the show "Belahdan" on Twin Cities PBS that was first unearthed by Fox News in February. Omar’s office did not respond to Fox News’ request for comment on the clip.

The segment in question resurfaced this week -- posted online by The Reagan Battalion, and quickly generating outrage from conservative commentators -- amid the controversy over a speech last month in which she described the Sept. 11, 2001 terror attacks as “some people did something.”

“CAIR was founded after 9/11 because they recognized that some people did something, and that all of us were starting to lose access to our civil liberties,” Omar said at a Council on American-Islamic Relations (CAIR) fundraiser.

Texas GOP Rep. Dan Crenshaw forcefully came out against Omar’s language, calling her out in a viral tweet: “First Member of Congress to ever describe terrorists who killed thousands of Americans on 9/11 as ‘some people who did something.’ Unbelievable.”

The New York Post, meanwhile, published a dramatic front page Thursday with a photo of New York City’s Twin Towers on fire the day of the attacks, reading: “Here’s your something: 2,977 people dead by terrorism.”

Omar’s allies in Congress came out in defense of the congresswoman, with Rep. Alexandria Ocasio-Cortez pointing out that Omar is a co-sponsor of the September 11th Victim Compensation Fund law.

She also accused Crenshaw of opposing the bill, tweeting: “You refuse to cosponsor the 9/11 Victim’s Compensation Fund, yet have the audacity to drum resentment towards Ilhan w/completely out-of-context quotes.”

Rep. Rashida Tlaib, meanwhile, told MSNBC that Omar’s words were taken out of context. “They do that all the time, especially women of color, they take our words out of context because they’re afraid because we speak truth, we speak truth to power,” Tlaib said.

Tlaib also warned that such attention could lead to death threats for Omar. 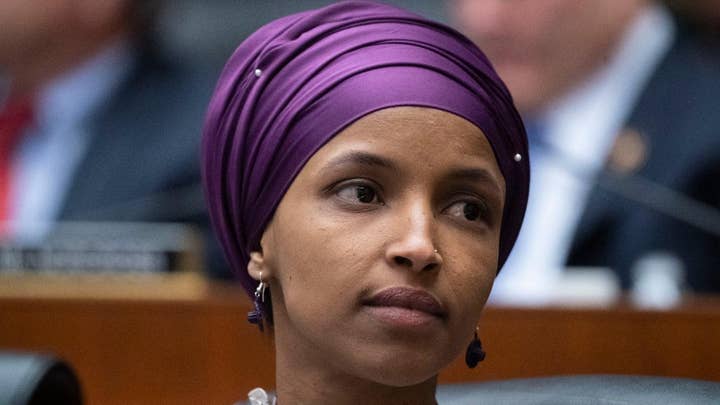 Omar, though, has a history of controversial comments regarding terrorism.

During the same 2013 interview, Omar described acts of terrorism as a reaction to “our involvement in other people’s affairs” following the brutal al-Shabab attack on a Kenyan shopping mall in 2013 that killed nearly 70 people and wounded 200.

“When are we gonna decide or realize that terrorism is a reaction? It’s an ideology, it’s a means of things, it’s not an entity, it’s not a place, people. It’s a reaction to a situation,” the show host Ahmed Tharwat asked Omar.

She continued: “For us, it’s always ‘I must have not done anything. Why is it happening to me?’ Nobody wants to take accountability of how these are byproducts of the actions of our involvement in other people’s affairs.”

“Nobody wants to face how the actions of the other people that are involved in the world have contributed to the rise of the radicalization and the rise of terrorist acts.”

About three years later, Omar – then a state representative – penned a letter to a judge asking for leniency toward a group of Minnesota men accused of trying to join the Islamic State terror group.

“Such punitive measures not only lack efficacy, they inevitably create an environment in which extremism can flourish, aligning with the presupposition of terrorist recruitment,” she added in the letter.