Rep. Alexandria Ocasio-Cortez, D-N.Y., and Rep. Rashida Tlaib, D-Mich., have both jumped to the defense of their under fire fellow freshman Democrat Ilhan Omar, saying Thursday her comment in reference to 9/11 has been wildly taken out of context.

Omar, D-Minn., is facing backlash after a speech at a Muslim rights group’s event in which she described the September 11, 2001, terror attacks as “some people did something”.

The comment has drawn ire from the likes of Rep. Dan Crenshaw, R-Tx, and the New York Post, which published a dramatic front page Thursday with an infamous photo of New York City’s Twin Towers on fire on the day of the attacks.

The page read: “Here’s your something: 2,977 people dead by terrorism.”

Tlaib, when asked by MSNBC if Omar should have rethought her words, said that she had been taken out of context.

“They do that all the time, especially women of color, they take our words out of context because they’re afraid because we speak truth, we speak truth to power,” Tlaib said.

“My sister Ilhan Omar, what she was talking about, was uplifting people by supporting their civil liberties and civil rights. She has always, always condemned any strategy, especially of a person directly impacted by being a refugee herself.

Tlaib added that she was “outraged” because she believes it would lead to death threats for Omar.

“The fact that people are taking those words out of context and endangering the life of Rep. Omar is immoral, it’s wrong and it needs to be called out by many colleagues in saying they need to stop, stop targeting her this way. It's absolutely putting her life in danger.” 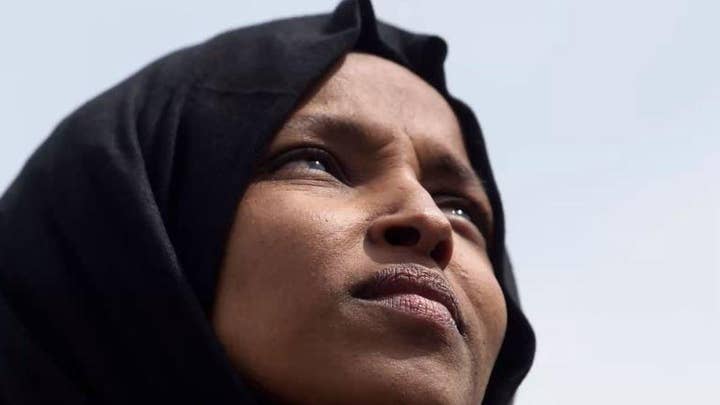 Ocasio-Cortez went the way of Twitter, condemning the Post's cover as "horrifying" and "hateful"

"Here’s 1 fact," she wrote. "@IlhanMN is a cosponsor of the 9/11 Victim Compensation Fund. She‘s done more for 9/11 families than the GOP who won’t even support healthcare for 1st responders- yet are happy to weaponize her faith."

She also attacked Crenshaw in a follow-up Tweet, accusing him of failing to cosponsor a bill: "Permanent Authorization of the September 11th Victim Compensation Fund Act." Omar is a cosponsor.

Ocasio-Cortez said later Thursday: “To elicit such an image for such a transparently and politically motivated attack on Ilhan... we are getting to the level where this is an incitement of violence against progressive women of color, and if they can’t figure out how to get it back to policy, we need to call it out for what it is because this is not normal. And, this is not a normal level of political debate or rhetoric, as wild as it can get sometimes. This is something beyond what is normal.”

Omar spoke at a Council on American-Islamic Relations (CAIR) fundraiser last month, where she called upon other Muslim Americans to “make people uncomfortable” with their activism and presence in the society and criticized the Jewish state.

“CAIR was founded after 9/11 because they recognized that some people did something, and that all of us were starting to lose access to our civil liberties,” Omar said at the event. CAIR was actually founded in 1994.

Omar’s speech at CAIR in Southern California drew hundreds of protesters waving Israeli flags and denouncing the congresswoman’s comments about Israel that were perceived as anti-Semitic.