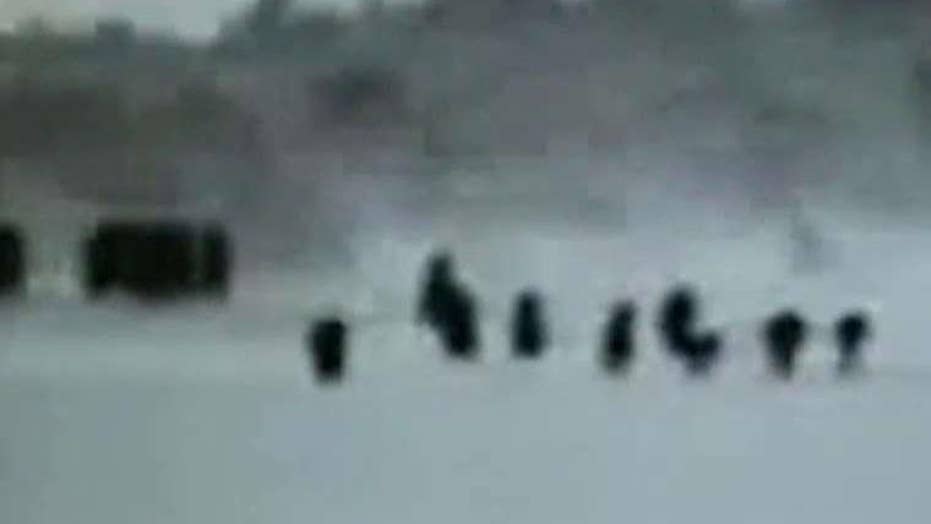 How Border Patrol agents would make the border more secure

Agents say the wall is unrealistic, but installing a steel fence is a good start

The U.S. - Mexican border is like a 2,000-mile roller coaster that weaves through deserts, mountains and rivers. It crosses four states, 45 cities and dips deep into washes only to rise 10,000 feet in the Coronado National Forest. The soil is soft like a sponge near the Rio Grande and rock hard near the granite quarries of San Diego County.

GOP presidential candidate Donald Trump wants to build a 'big, beautiful wall' across the entire border. Is that advisable or even feasible? Fox News asked one group whose opinion actually matters: the men and women who patrol it each day on foot, horseback, ATV, helicopter and SUV -- the U.S. Border Patrol.

"One person makes the stand, 'We need a wall, We need a wall'. Well, you never bothered asking the agents - what all do we need?" asked Art Del Cueto, a long time Tucson Border Patrol agent. "It is not just the wall. There are many things we need to perform our jobs effectively."

After a conference call with agents from several sectors representing every state on the Southwest border, they seemed to zero in on certain conclusions:

-- Whether you call it a wall, or a fence, agents say they work.

-- A cinder block or rock wall, in the traditional sense, isn't necessarily the most effective or desirable choice. Seeing through a fence allows agents to anticipate and mobilize, prior to illegal immigrants actually climbing or cutting through the fence.

--Barriers in some places must account for flash floods typical in the Southwest deserts, parts of California and near the Rio Grande River. A wall would have to allow water to pass through, or the sheer force of raging water could damage its integrity, not to mention the legal rights of both the U.S. and Mexico to seasonal rains.

-- The current border fence incorporates more than a dozen engineering designs, depending on  topography and geology. In places it is barbed wire, or a cyclone fence like you'd find in any suburban neighborhood. In others, 18-foot steel bollards filled with concrete sink six feet deep into a massive plate of cement.

Older portions of the fence are World War II- era steel landing mats welded together. Old and rusty, illegal immigrants and coyotes use cutting torches like a hot knife to cut holes in the fence for drugs, people, even trucks to speed through.

"The wall is just one deterrent," says Del Cueto. "We need the wall. But we also definitely need more boots on the ground. We need more equipment. It is not just one thing."

Agents call the strategy “defense in depth.” What it means is a fence provides a primary barrier. It is backed up by ground sensors and cameras and radar mounted on tall poles that detect movement. That information is picked up in operation centers, which relay it to field agents who can then locate and arrest the perpetrators.

"It is a layered approach," says Yuma Sector Chief Anthony Porvaznik. "The fence gives us time. The fence protects the agents. It lowers the risk and gives us time to respond to illegal activity. It slows people down. The cameras give a situational awareness so agents know what they're about to encounter before they do."

In 2006, Congress passed the Secure Fence Act. It mandated 700 miles of 'double layer, reinforced fence.' But at roughly $6 million a mile, the Department of Homeland Security realized it would run out of money. So it built only 36 miles double fencing, almost entirely in Yuma. Today it is the single most secure area of the border.

The agency, under a controversial amendment the following year, built 350 miles of single layer pedestrian fence and 299 miles of vehicle barrier. In places, the pedestrian fence is effective, but far from perfect. The vehicle barrier helps stop drug loads and vans full of illegal immigrants, but it doesn't stop individuals from walking over and getting in a waiting SUV.

"What the fence does in the urban area is give us an opportunity to detect traffic and stop it before it assimilates into the local population, says Manny Padilla, the new sector chief in the Rio Grande Valley in Texas.

But in the rural areas, like the private ranches and massive public lands in Arizona, the border fence  gives way to rusted steel i-beams and barbed wire.

"All they have to do to get into the United States is simply crawl through this fence," says Arivaca Arizonan Rancher Jim Chilton. "Our border fence is four strands of barbed wire. Easily gone over, easily crawled under."

In several areas on Chilton's 50,000 acre ranch, there is no fence at all. He installed trail cameras that show drug packers and illegal immigrants crossing his land miles past the border itself.

He, like most ranchers, favors building the wall. But no matter how tall, even he admits it is only one component of a secure border. Without cameras to see, without high speed access roads and adequate manpower, a wall is no barrier at all to illegal immigrants who will go over it, cut through it or tunnel under it.