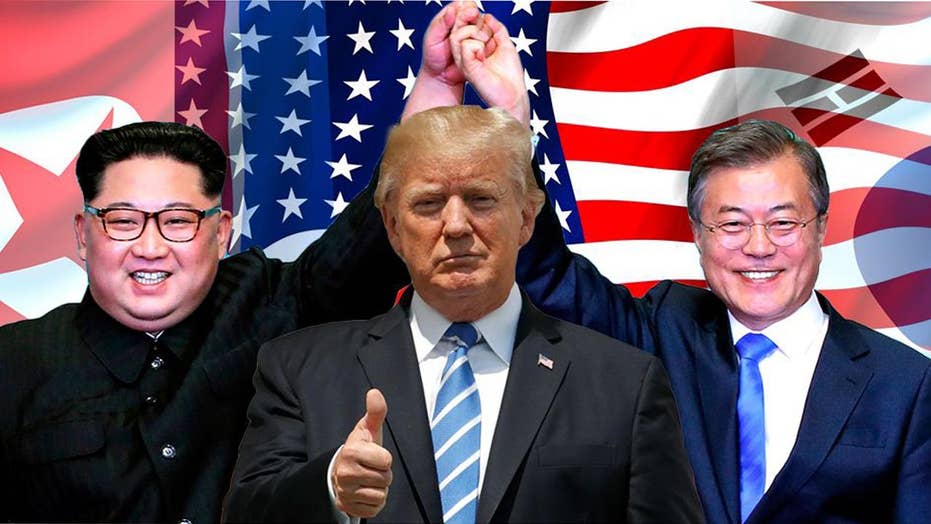 South Korean President Moon Jae-in said Monday that President Trump deserves to win a Nobel Peace Prize for his role in talks to denuclearize the Korean peninsula and end the decades-long war between the North and South.

EXCLUSIVE – A group of 18 Republican lawmakers have signed their names to a letter formally nominating President Trump for a Nobel Peace Prize -- the latest development in a growing push to award the president the honor for his work toward peace in the Korean Peninsula.

The letter, sent by Rep. Luke Messer, R-Ind. to the Norwegian Nobel Committee on Tuesday, and signed by 17 other members, says Trump has worked “tirelessly to apply maximum pressure to North Korea to end its illicit weapons programs and bring peace to the region.”

“His Administration successfully united the international community, including China, to impose one of the most successful international sanctions regimes in history,” the letter says. “The sanctions have decimated the North Korean economy and have been largely credited for bringing North Korea to the negotiating table.”

“Although North Korea has evaded demands from the international community to cease its aggression for decades, President Trump’s peace through strength policies are working and bringing peace to the Korean peninsula,” the letter says. “We can think of no one more deserving of the Committee’s recognition in 2019 than President Trump for his tireless work to bring peace to our world.”

The nomination is for the 2019 prize, as the 2018 award nomination period ended in February. According to the Nobel Prize's website, a nomination is considered valid if submitted by persons in certain categories -- including “members of national assemblies and national governments (cabinet members/ministers) of sovereign states as well as current heads of state." There are 330 candidates for the 2018 prize, which will be announced in October.

Messer, who is currently locked in a Republican primary battle to challenge incumbent Indiana Democratic Sen. Joe Donnelly in this year’s midterm, announced his intention to nominate Trump last week and floated the idea of the prize in March.

“The only reason the North Korean dictator is coming to the table is because President Trump has stared him down and shown him that we have a leader in America who means business and who has changed the dynamic in major ways,” Messer told Fox News. “That’s why I think he has to be considered for the Nobel Peace Prize.”

The move for an award for Trump has picked up steam since the dramatic developments in relation to North Korea, which has seen the leaders of North and South Korea meet in person for a summit where the two discussed denuclearization and declared a formal end to the Korean War. The North Korean regime has also said it will end its nuclear weapons and intercontinental ballistic missile testing program.

In a rally in Michigan at the weekend, Trump touted progress in North Korea and was interrupted by supporters chanting: “No-bel, No-bel, No-bel.” 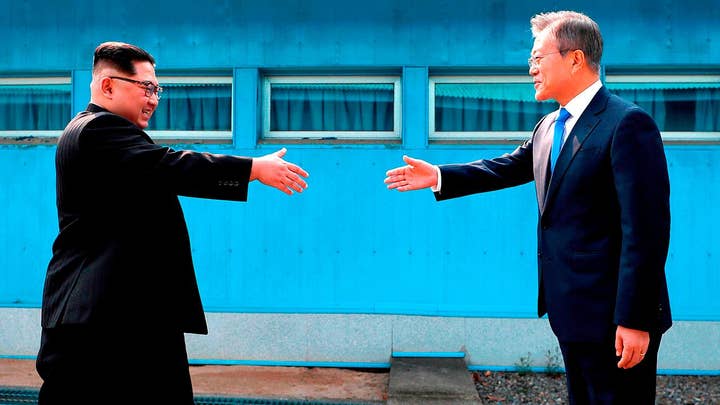 An award would likely be controversial among many peace activists, who would point to Trump’s fiery language toward North Korean dictator Kim Jong-un -- whom he dubbed “rocket man” and warned was on a “suicide mission for himself” in 2017. But supporters say that Trump’s tactics were part of a “peace through strength” approach of the kind that proved successful for President Ronald Reagan when he faced down the Soviet Union.

"The peace through strength approach to national security is delivering results, not just in North Korea,” Messer said. “ISIS is on the run and I think the world is waking up to the fact that there's a new sheriff in town and the world’s most important leader today is Donald Trump.”

The push for Trump to get the prize was given a big boost when South Korean President Moon Jae-in said Trump should get the prize.

Does Trump deserve Nobel Prize for efforts with North Korea?

“President Trump should win the Nobel Peace Prize,” Moon reportedly told a meeting of senior secretaries, according to Reuters. “What we need is only peace.”

Earlier this year, Moon praised Trump’s role in brokering an end to the crisis, noting he “deserves big credit for bringing about the inter-Korean talks,” and said “it could be a resulting work of the U.S.-led sanctions and pressure.”

For many U.S. conservatives, it would also work to rectify the controversial 2009 decision by the committee to award the honor to President Barack Obama at a time when he had only just taken office and had not had a chance to rack up any foreign policy achievements.

The committee chose to award it to Obama for his “extraordinary efforts to strengthen international diplomacy and cooperation between peoples” and specifically for his “vision of and work for a world without nuclear weapons.”

But the decision was widely criticized, and even Obama in his acceptance speech noted that other past recipients were “far more deserving of this honor than I.” Obama struggled to bring peace to the Korean Peninsula, and Trump said recently that Obama told him during the transition that it would be his “biggest problem” in terms of foreign policy.

“If the Nobel Peace Prize means anything, President Trump should have a great shot at getting it,” Messer said. “After all President Obama received it for little more than running a glamorous campaign for president. Trump has shown major steps toward delivering peace.”

Presidents Jimmy Carter, Woodrow Wilson and Theodore Roosevelt have also been honored with the award. In 2007, former Vice President Al Gore was given the award alongside the Intergovernmental Panel on Climate Change (IPCC) for their work on climate change.

“President Trump, if he can lead us to ending the Korean War after 70 years and getting North Korea to give up their nuclear program in a verifiable way deserves the Nobel Peace Prize and then some,” Graham said.

However, he also recognized just how controversial such an award would be among Trump opponents.

“It may be the first time the Nobel Peace Prize was given and there was mass casualties because I think a lot of liberals would kill themselves if they did that,” he joked.