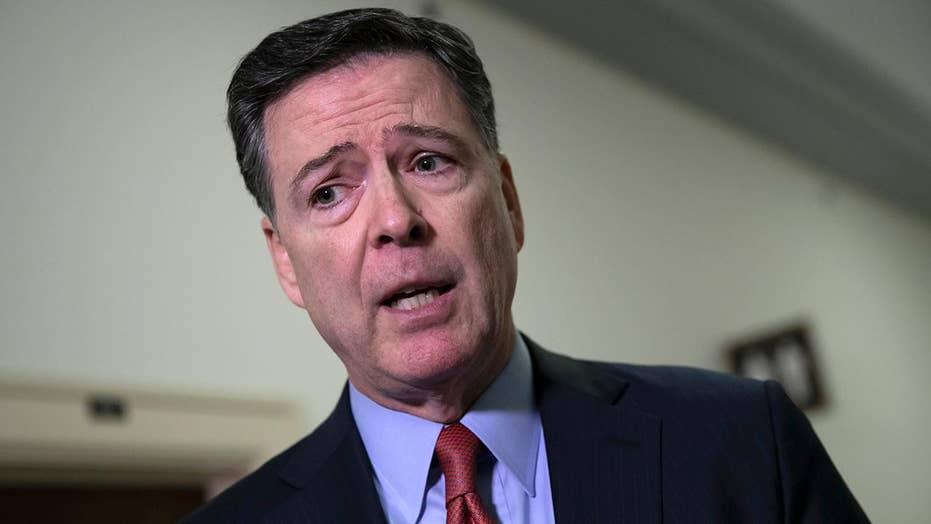 House Republicans on Tuesday released a transcript of their explosive closed-door session a day earlier with fired FBI Director James Comey, who revealed during the questioning that FBI agents knew "exactly" what ex-National Security Adviser Michael Flynn had told Russian ambassador Sergey Kislyak prior to interviewing Flynn at the White House.

The 173-page transcript, which documented congressional Republicans' second hearing with Comey this month, additionally included Comey's explanation of why he broke normal protocol by sending two FBI agents into the White House to interview Flynn in January 2017, without involving or notifying White House lawyers.

Flynn has pleaded guilty to lying to the FBI during that fateful interview about whether he had talked with Kislyak about Russia modulating its response to sweeping sanctions imposed against Russia by the Obama administration, as well as whether he had discussed whether Russia could veto a United Nations vote condemning Israel. His sentencing was delayed on Monday until March, after a fiery hearing in which the presiding judge openly voiced his "disgust" at Flynn's conduct.

Flynn was fired in February 2017 for misleading Vice President Mike Pence on the same topic, but was not charged with any wrongdoing related to the substance of his communications with Kislyak. And, a Washington Post article published one day before his White House interview with the agents, citing FBI sources, publicly revealed that the FBI had wiretapped Flynn's calls and cleared him of any criminal conduct.

"The agents went to interview Flynn to try and understand why the national security adviser was making false statements to the vice president of the United States about his interactions with the Russians during the transition," Comey said, responding to a question from House Oversight Committee chair Rep. Trey Gowdy, R-S.C.

Comey added: "I knew certain classified facts about the nature of [Flynn's] interactions with the Russians" prior to sending the agents into the White House.

Ex-FBI official Peter Strzok texted Lisa Page in December 2016 that he was worried about others 'leaking like mad'; Catherine Herridge reports on the latest revelations.

The former FBI director confirmed that one of the agents he sent was a "career counterintelligence agent," and the other was Peter Strzok -- who has since been fired from both Special Counsel Robert Mueller's team and from the FBI over his apparent bias against President Trump. Comey denied specifically sending Strzok, or hand-picking the agents who questioned Flynn.

"I knew that the vice president was making statements that he attributed to conversations he'd had with Mr. Flynn that were starkly at odds with those classified facts," he said.

Gowdy then said: "You knew exactly what General Flynn had said to the Russian Ambassador before you interviewed him." Comey replied, "Yes."

Comey also said he had not discussed the Flynn interview with Trump: "We had an open investigation, criminal investigation, counterintelligence investigation," Comey said. "There was no way I would discuss that with the president."

An FBI witness report released Monday that documented the January 2017 Flynn interview -- finalized in February 2017 -- showed that Flynn apparently was aware his calls had been wiretapped. On two occasions, agents wrote, Flynn thanked them for reminding him of some of his talks with Kislyak concerning the United Nations.

"Yes, good reminder," Flynn said at one point, according to the witness report.

COMEY ADMITS DECISION TO SEND FBI AGENTS DIRECTLY TO FLYNN BROKE PROTOCOL, SAYS FBI GOT 'AWAY WITH' IT

He continued, "I'd never worked in a transition time before, but my understanding was that, in a more established administrative environment, you wouldn't get away with just calling the witness and saying, 'Can we come and talk to you?'"

Comey also pushed back on Republicans' questions as to why the FBI didn't warn Flynn that he could be prosecuted for lying to them. Investigators had issued those warnings to several other targets in the Russia probe. In a court filing last year, Mueller's team took pains to note that FBI agents who interviewed former Trump aide George Papadopoulos on January 27, 2017 -- just days after the Flynn interview -- had advised Papadopoulos that "lying to them 'is a federal offense'" and that he could get "in trouble" if he did not tell the truth.

"He was an extraordinarily experienced person and so reasonably should be assumed to understand you can't lie to the FBI," Comey told House Republicans.

"Second, it's not protocol. The FBI does not do that in noncustodial interviews," he added. "And, third, you want to find out what the witness will say to you before you heat up an interview by raising the prospect that the witness might be lying to you."

Comey said he did not recall whether Flynn had asked about an attorney, but said then-FBI Deputy Director Andrew McCabe had "volunteered to him that you are welcome to have somebody present from the White House Counsel's Office. And I think he said, in substance, there'd be no need for that."

According to a memorandum he wrote at the time, McCabe had advised Flynn that should he choose to seek counsel, the Justice Department would have to become involved.

Comey also disclosed that then-Acting Attorney General Dana Boente made a remark along the lines of, "Oh, God, I was hoping that would go away," when reminded of Trump's request that the Justice Department make clear he was not under criminal investigation. Comey, who said he had relayed Trump's request to Boente, added he did not personally inform the public that Trump was not under investigation because he felt that was the DOJ's decision to make.

Later during the hearing, under questioning from Rep. John Ratcliffe, R-Texas, Comey admitted he had eliminated any mention of President Obama's secret email alias -- which he used to communicate to Hillary Clinton on her private email server -- from his public remarks at a July 5th, 2016 news conference announcing that Clinton had been "extremely careless" in her handling of classified information.

Comey explained: "Let's imagine the Russians had captured that communication. ... We didn't want to do anything to confirm to the bad guys that they might have Barack Obama's private cover email unclassified." Comey emphasized that Obama and Clinton did not discuss classified information using that email arrangement.

But the fired FBI Director said he was worried that Clinton had exposed Obama's secret email alias by communicating with him while she was overseas.

"The concern we had was about the exposure of his unclassified email account, which was not in his name," Comey said.

"I was very concerned that he might interpret it as an effort to pull a J. Edgar Hoover on him," Comey said, adding that he explained "that it was unverified, that it wasn't something that we were investigating, and then, once the conversation, in my judgment, started to go off the rails, by then telling him we were not investigating him personally."

The former FBI director excoriated Republicans on Monday after exiting the hearing -- his second Capitol Hill appearance this month where he was called to answer questions on the Russia and Hillary Clinton email probes.

“Someday, they'll have to explain to their grandchildren what they did today," a defiant Comey said of the Republicans on the two House committees that conducted the interview, accusing them of not defending the FBI from President Trump’s attacks.

Republicans, for their part, have accused Comey of not being forthcoming. He was called back to Capitol Hill after an appearance in early December in which he repeatedly claimed not to know or remember the answers to numerous questions. Jordan told reporters he was not satisfied with Comey's answers on Monday, either.

Comey, though, cast the questioning from lawmakers on the House Judiciary and Oversight committees as political and defended his own leadership, under which agents investigated Clinton and began probing relationships between the Trump campaign and Russia.

“We had to make very hard decisions in 2016,” Comey said. “I knew we were going to get hurt by it. The question was how do we reduce the damage.”

Asked by Fox News' Catherine Herridge whether he bore any responsibility for the FBI's reputation taking a hit, he responded, "No."

Speaking to reporters after the hearing, Comey called it “frustrating to be here.”

“The questions about Hillary Clinton and Steele dossier strike me as more of the same,” Comey said. “I didn’t learn anything new in there. Maybe they did.”

Lashing out at Republicans, Comey also called for them to stand up to the “fear of Fox News, fear of their base, fear of mean tweets” and “stand up for the values of this country.”

Earlier, North Carolina Rep. Mark Meadows told reporters Republicans planned to focus their Comey questioning on a new FBI document that was released Friday in response to a Freedom of Information Act and published by Politico.

He told reporters he wanted Comey to clarify when he first became aware of the involvement of the Democratic National Committee, law firm Perkins Coie and the opposition research group Fusion GPS in the production of the dossier.

“I want to give him a chance to clarify all that,” Meadows said.

That heavily redacted document details the information regarding the bureau’s Russia investigation that Comey, serving as FBI director at the time, briefed Trump about shortly after the Republican was elected president. The document, once again, suggests the FBI was vague in the sourcing of the dossier’s origin as being funded by anti-Trump Democrats.

Rep. Goodlatte: Comey is still playing games with us

Republican claims the ousted FBI director continued his pattern of not answering questions he didn't like during his second closed-door meeting with Congress.

But Meadows also says he believes it could conflict with previous statements from Comey about what he knew of the dossier’s origins at the time.

“I can’t imagine how the director of the FBI did not know the connection between Fusion GPS, Perkins Coie, and the DNC, as it related to the infamous dossier,” Meadows told reporters.

During an interview with Fox News’ Bret Baier in April, Comey said he first learned about the existence of the dossier in the fall of 2016 but still didn’t “know…for a fact” that the DNC and Hilary Clinton campaign had funded the work. The dossier was funded by the DNC and Clinton campaign. The FBI document vaguely refers to it as being paid for by “private clients.”

Referring to Steele, who authored the dossier, the memo said, “The source is an executive of a private business intelligence firm and a former employee of a friendly intelligence service who has been compensated for previous reporting over the past three years." It also said, "The source collected this information on behalf of private clients and was not compensated for it by the FBI.”

Trump has railed against the FBI for relying in part on a dossier funded by Trump’s political opponents as it began investigating the relationships between Russia and members of Trump’s campaign.

Earlier this year, Comey said during his book tour that he didn’t tell the president about the origins of the dossier during the briefing, saying it “wasn’t necessary.”

Comey returned for more Capitol Hill testimony after the prior Dec. 7 session left lame-duck Republican lawmakers fuming as Comey repeatedly said "I don't remember," "I don't know" and "I don't recall" when grilled about investigations Republicans believed were aimed at hurting Trump.

The questioning covered the FBI's probe of Clinton's email server and how a counter-intelligence investigation into Russian meddling in the 2016 presidential election morphed into an all-encompassing probe of Trump's inner circle, including the obtaining of FISA warrants used to spy on American citizens.

A transcript of the marathon interview was released on Dec. 8, demonstrating the fired FBI boss' lack of responsiveness and the tension between him and GOP lawmakers.