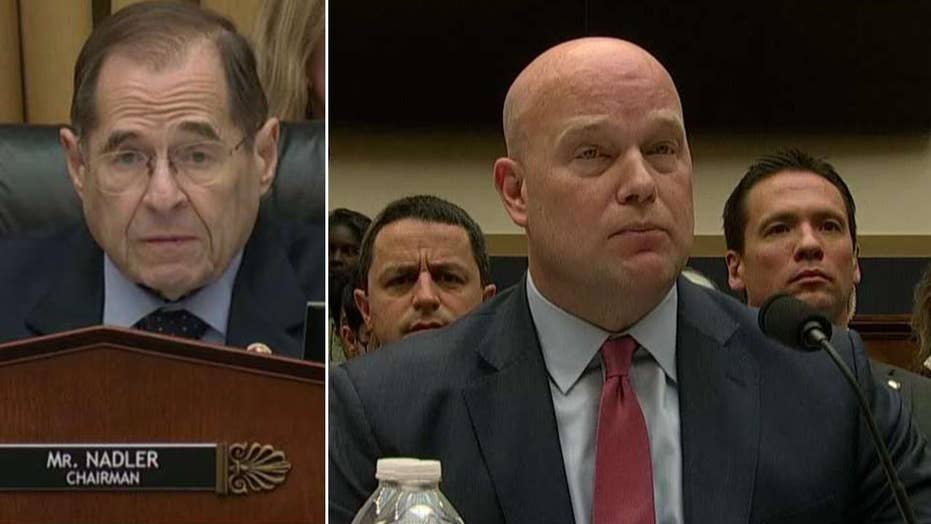 Acting Attorney General Matthew Whitaker stunned onlookers and lawmakers during an already-contentious House hearing Friday, when he tried to call time on the Democratic chairman after yet another line of questioning regarding Special Counsel Robert Mueller's Russia probe.

The retort came after Chairman Jerrold Nadler, D-N.Y., first said he wanted Whitaker to appear for a private deposition after the hearing and went on to ask Whitaker whether he had been “asked to approve any requests or action” for the special counsel.

WHITAKER WILL TESTIFY BEFORE HOUSE PANEL AFTER TENSE BACK-AND-FORTH: NADLER AND DOJ

“Mr. Chairman, I see that your five minutes is up, so…” Whitaker replied as the hearing room broke out in gasps. “I am here voluntarily. We have agreed to five-minute rounds.”

Nadler, who even cracked a slight smile at the response, repeated his question, and Whitaker ultimately responded: “I have not interfered in any way with the special counsel’s investigation.”

As it dragged on, the hearing repeatedly gave way to bickering among Whitaker and Democratic lawmakers, and among members of the committee, over whether Whitaker was properly answering questions. At one point, he tussled with Rep. Sheila Jackson Lee, D-Texas, when she pressed on whether he’s appeared before for an oversight hearing.

While the answer, eventually, was that he had not, the congresswoman objected when Whitaker would not answer with a requested “yes or no.” When she asked the chairman if her time had been restored, Whitaker snarked back: “I don’t know whether your time’s been restored or not.”

“Mr. Attorney General, we’re not joking here, and your humor is not acceptable,” the congresswoman responded.

The fiery back and forth follows a dramatic political prelude to the hearing itself, complete with threats by Nadler to subpoena the witness and threats by the DOJ to boycott. Democrats are acutely focused on Whitaker's oversight of the Mueller probe, in his acting AG status while awaiting confirmation of President Trump's attorney general pick William Barr.

“There has been no change in the overall management of the special counsel investigation,” Whitaker testified Friday, saying that he never offered any “promises or commitments” regarding the Mueller or any other investigation.

Nadler pressed Whitaker over whether he had shared information about the investigation with Trump, or any White House officials.

“I do not intend today to talk about my private conversations, but to answer your question, I did not talk to the president about the status of the investigation,” Whitaker answered. “Consistent with what I’ve already said, I have not talked about the special counsel’s investigation with any White House officials.”

Whitaker did not directly answer several of Nadler’s other questions, resulting in the chairman requesting that the acting attorney general return to the committee at a later date.

“I’ve given you a fair opportunity so that we could avoid this fight in the first place, but you don’t appear to have done any of that,” Nadler said, referring to Whitaker’s preparations, while saying, “I do not believe issuing a subpoena here would correct the problem.” Nadler explained that the committee would “attempt to reach an accommodation with the department to receive answers,” so Whitaker can return for “deposition before the committee, under oath.”

Nadler said that, at that point, he expects “clean answers or proper assertion of privilege claimed by the president.”

Meanwhile, the top Republican on the committee blasted the hearing as a "dog and pony show."

“This hearing is a character assassination on Acting Attorney General Whitaker, all pure political theater, to go after the president,” Ranking Member Doug Collins, R-Ga, said in his opening statement while urging the committee to adjourn.

WHITAKER: MUELLER PROBE IS 'CLOSE TO BEING COMPLETED'

A vote was then taken on whether to abruptly end the hearing. The measure did not pass, and the hearing began as scheduled.

The hearing follows an intense back and forth between the Justice Department and the Judiciary Committee a day earlier.

The Judiciary Committee voted Thursday to give Nadler the authority to issue a subpoena if necessary, despite Whitaker having already agreed to appear before the panel voluntarily.

Nadler made clear early Thursday that he did not want to have to subpoena Whitaker, but said a “series of troubling events” suggested it would be better for him to be prepared with that authority, just in case he decided not to show up for the hearing.

But Whitaker then warned he would not show up unless lawmakers dropped the threat.

Hours later, Nadler responded that if Whitaker appeared before the panel “prepared to respond to questions from our members, then I assure you there will be no need for the committee to issue a subpoena on or before February 8.”

The hearing Friday comes as the Senate is close to confirming Trump’s nominee for attorney general. The Senate Judiciary Committee on Thursday voted, along party lines, to advance Barr’s nomination to the full Senate for confirmation.

Nadler and other Democrats have criticized Whitaker for not recusing himself from the Mueller probe, as Sessions did due to his involvement with the Trump campaign in 2016, as Whitaker had made public comments criticizing the investigation.

The hearing is the committee’s first major oversight hearing looking at the Justice Department of this Congress. Whitaker told reporters last week that Mueller’s probe was “close to being completed,” the first official sign that the investigation may be nearing an end. His comments, though, were a departure for the Justice Department, which rarely comments on the status of investigations. Whitaker, though, said he had been “fully briefed” on the probe.