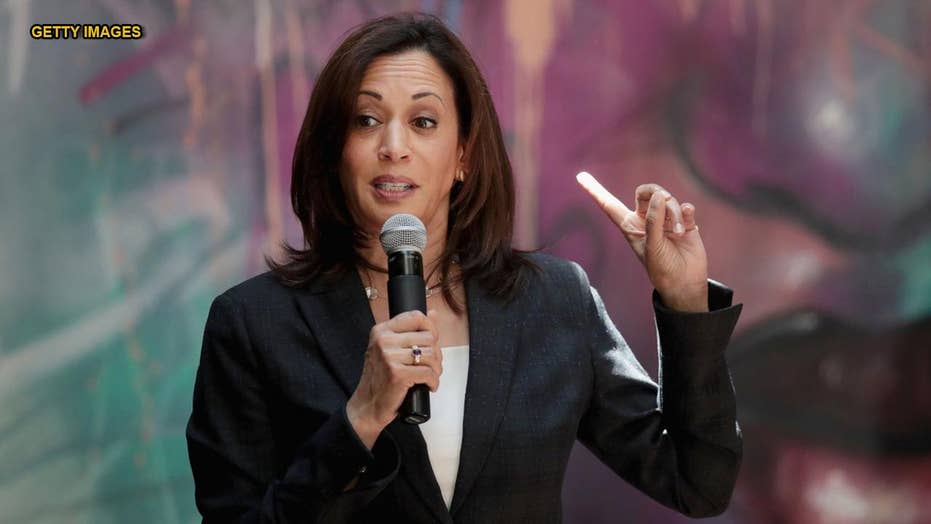 Thanks to a breakout performance in the recent Democratic presidential nomination debates, Sen. Kamala Harris of California has been able to raise nearly $12 million in the last three months. However, this amount pales in comparison to three of her rivals for the nomination, Sen. Bernie Sanders, former Vice President Joe Biden, and South Bend, Indiana Mayor Pete Buttigieg.

Boosted by a break-out performance in last week’s first round of Democratic presidential nomination debates, Sen. Kamala Harris of California raised nearly $12 million the past three months, her presidential campaign announced on Friday.

But the fundraising haul is pretty much on par with what Harris brought in during the first quarter of the year. And it pales in comparison to the amount raised in the second quarter by three of her rivals for the Democratic nomination -- Sen. Bernie Sanders of Vermont, former Vice President Joe Biden, and South Bend, Ind., Mayor Pete Buttigieg.

ONE WEEK AFTER DEBATE, HARRIS AND BIDEN STILL FIGHTING OVER SCHOOL BUSING

The Harris campaign reported that their April-June haul came from more than 279,000 contributors, and that 150,000 of those donors were new to the campaign.

The campaign added that more than $7 million was raised online and that the average contribution during the second quarter was $39, with an average of $24 for online donations.

Around $2 million of the amount the senator raised came in the wake of her high-profile confrontation with Biden during last week’s debate. During the showdown, the senator grilled the former vice president about recent comments where he spotlighted his ability to work decades ago with segregationist senators that he disagreed with in order to find common ground. And she criticized his stance against federally mandated busing to desegregate schools.

She also shared a personal story of being bused to school as a little girl as her campaign quickly tweeted out a photo of Harris as a young child. Her campaign instantly began selling shirts with that photo and her quote, “That Little Girl Was Me.” On Friday, they reported selling 1,440 of them, raising nearly a half-million dollars online.

The senator's debate performance also gave Harris a big boost in the latest polls, vaulting her into second place behind Biden in some of the surveys.

Harris Campaign Manager Juan Rodriguez – touting the fundraising report – said that “as it has been from the beginning, this campaign is powered by the people. These resources will help expand Kamala’s growing strength in this primary and put her position to win the Democratic nomination.”

His campaign highlighted that they raised over $2 million since the governor launched his presidential campaign on May 14, which was halfway into the second quarter of fundraising.

“Governor Bullock received grassroots support from all 50 states and raised over $2 million, without the transfer of other funds. It's clear Governor Bullock's message of winning back places Democrats lost in 2016 and ending dark money's corrupting influence will resonate in early states like Iowa and New Hampshire, and he will continue working to earn every vote,” touted Bullock Campaign Manager Jenn Ridder.

But the campaign did not reveal how many individuals contributed to Bullock. The number of total individual contributors is a key metric for qualifying for the Democratic presidential nomination debates.

On Wednesday, another longshot for the Democratic presidential nomination, Sen. Michael Bennet of Colorado, announced raising $2.8 million, with $700,000 transferred from other accounts. As with Bullock, Bennet didn’t reveal the total number of individual donors.

And like Bullock, Bennet also jumped into the race relatively late. He announced on May 2, a month into the second quarter of fundraising.

Bennet spokeswoman Shannon Beckham said that “despite Michael entering the race late because of a prostate cancer diagnosis, we raised more in two months than several other campaigns did in the entire first quarter.”