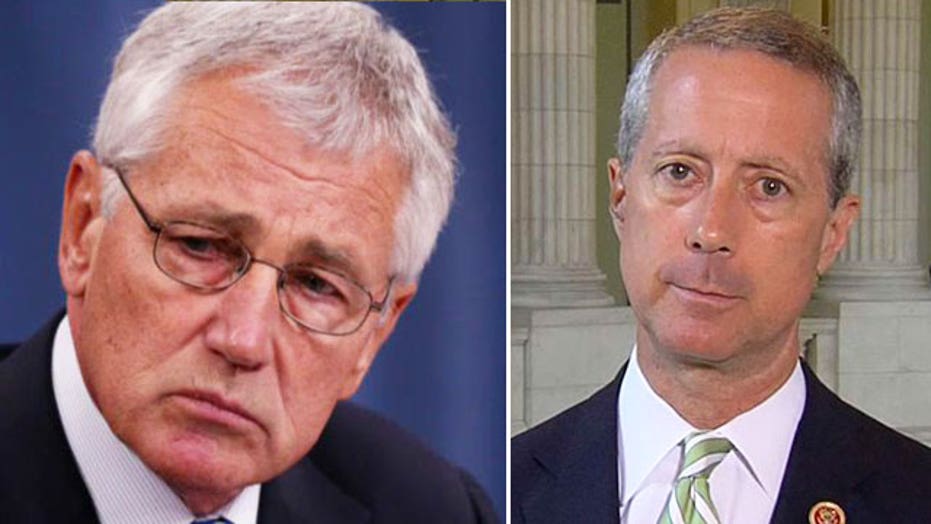 Defense Secretary Chuck Hagel is expected to defend the prisoner exchange that led to the release of U.S. Army Sgt. Bowe Bergdahl when he testifies before the House Armed Services Committee Wednesday.

Pentagon spokesman Rear Adm. John Kirby told The Associated Press that Hagel will explain to the committee that the Obama administration had a "very small, fleeting opportunity" to secure Bergdahl's release. Bergdahl was freed on May 31 after being held captive by the Taliban for almost five full years.

Kirby's description of a small window for the agreement meshed with comments by Sen. Dick Durbin, D-Ill., who told reporters Tuesday that the administration finalized the exchange only a day before it took place. The Senate's No. 2-ranked Democrat also said American officials didn't learn the pickup location for Bergdahl until an hour ahead of time, making the question of advance notification irrelevant.

Critics in Congress weren't convinced. In a bipartisan 33-13 vote, the House Appropriations Committee on Wednesday added a provision to a $570 billion defense spending bill that barred money for the transfer of future detainees from Guantanamo. It also withholds other funds from the Defense Department until Hagel assures lawmakers that notification rules will be respected.

Republicans on the committee are expected to question Hagel about the extent of the Pentagon's support for the agreement. Defense officials have said that they were intimately involved in negotiations, and Hagel has repeatedly said that he supports the deal.

"The real value of Secretary Hagel's testimony will be whether he and the Defense Department even had much of a say in what the State Department and the White House considered was case-closed on the prisoner swap," said Rep. Duncan Hunter, R-Calif., told the Wall Street Journal. "The Defense Department seems to be taking all the hits for a decision that I doubt was their best judgment or even their decision to make."

The committee is also likely to ask Hagel about the Pentagon's medical assessment of Bergdahl. The day after Bergdahl's release, Hagel told reporters that officials believed Bergdahl's health was deteriorating, adding more justification to the agreement.

"We don't negotiate with terrorists," House Speaker John Boehner said Tuesday. "We've made America less safe, here and around the world. And we're going to pay for this." Although Boehner and other lawmakers voiced concerns when told more than two years ago about the possibility of the trade, the Ohio Republican told reporters he "was never briefed on any specific negotiation."

Obama is "not going to get away with this one," Rep. Dana Rohrabacher, R-Calif., said after a closed-doors hearing of the House on Monday. He described the president's attitude as an "arrogant thumbing of his nose" at Congress.

The five Taliban officials released as part of the agreement had been at Guantanamo for more than a decade. Under the deal, they have to remain in Qatar for a year.