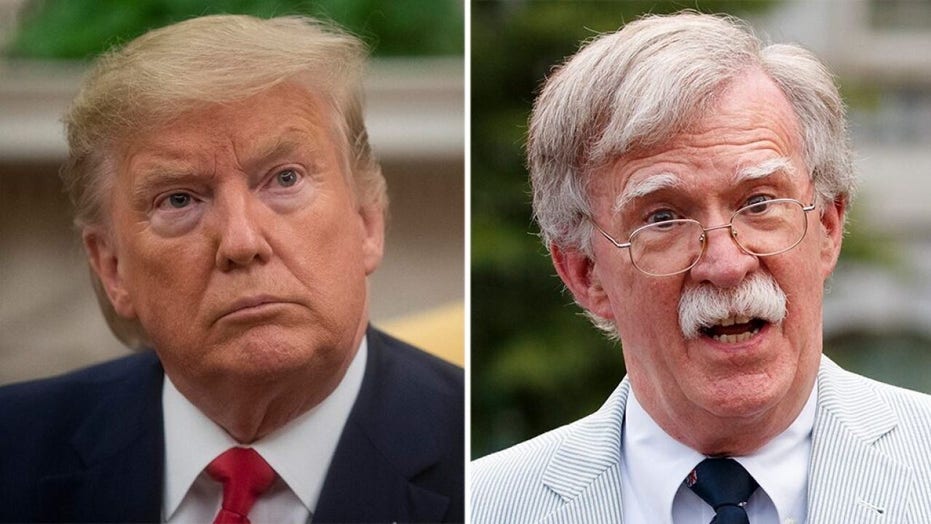 Do Trump and the DOJ have a case against John Bolton's book?

President Trump accuses his former national security adviser of breaking the law with his tell-all memoir as the DOJ seeks a restraining order to block the release; Fox News senior judicial analyst Judge Andrew Napolitano reacts and says it's a 'catastrophic mistake' to charge the Atlanta officer with murder in the Rayshard Brooks killing.

During an interview on Fox Business Network’s “Mornings with Maria,” Giuliani, the former New York City mayor, accused Bolton of making false allegations in his memoir, "The Room Where it Happened.”

“He’s a total backstabber,” Giuliani said. “I’ve known him for 10 years. He says all kinds of things about me in that book. He never was man enough to come up to me and raise that with me when we were in the administration, when I was representing the president.”

Giuliani added: “If he had a real problem with my representation of the president, or a legal problem that the president had, as the president’s lawyer and his friend for 10 years, you think he’d have been man enough to tell me? He wrote that in order to sell books.”

Bolton’s book contained several sections about Giuliani, specifically detailing his involvement in the Ukraine controversy that led to the president’s impeachment and acquittal earlier this year.

According to the memoir, on March 25, 2019, Trump called Bolton to the Oval Office, but Bolton says he found the president seated in a small dining room alongside personal attorneys Giuliani and Jay Sekulow. Giuliani was "the source of the stories about [then-U.S. Ukraine ambassador Marie] Yovanovitch," whom Giuliani said was "being protected" by George Kent, another State Department official. Trump ordered Yovanovitch fired at the meeting, the book states.

Speaking to Bolton, Secretary of State Mike Pompeo "protested that Giuliani's allegations simply weren't true and said he would call Trump," who had complained that the diplomat was "bad-mouthing us," according to the memoir.

On April 23, Trump and then-chief of staff Mick Mulvaney were in the Oval Office on the phone with Giuliani. Yovanovitch, Giuliani was telling Trump, "had spoken to President-Elect Zelensky to tell him Trump himself wanted certain investigations by Ukrainian prosecutors stopped.”

Bolton writes that Giuliani offered "no evidence" on the call for the allegations, which included that Yovanovitch was "protecting Hillary Clinton" because her campaign could be under investigation in Ukraine – "and there was some connection with Joe Biden's son Hunter in there as well.”

TRUMP FIRES BACK AT BOLTON OVER MEMOIR: 'MADE UP OF LIES & FAKE STORIES'

Meanwhile, Bolton wrote that Trump said that he didn’t want to have “any f—-ing thing to do with Ukraine,” claiming they “f—-ing attacked me.”

Trump's remarks, Bolton says, concerned what Trump saw as the Clinton campaign's efforts, "aided by Hunter Biden, to harm Trump in 2016 and 2020." When [U.S. diplomat Kurt] Volker tried to say something, Trump responded, "I don't give a sh--." When another official interjected that "we couldn't allow a failed state, presumably a Ukraine where effective government had broken down," Trump replied, "Talk to Rudy and Joe. ... I want the f--king DNC server."

Bolton writes: "I was stunned at the simplemindedness of pressing for a face-to-face Trump-Zelensky meeting where the 'Giuliani issues' could be resolved, an approach it appeared Mulvaney shared from his frequent meetings with [Gordon] Sondland. I told [NSC official] Fiona Hill to take the whole matter to the White House Counsel's office; she quoted me accurately as saying, 'I am not part of whatever drug deal Sondland and Mulvaney are cooking up.' I thought the whole affair was bad policy, questionable legally, and unacceptable as presidential behavior. Was it a factor in my later resignation? Yes, but as one of many 'straws' that contributed to my departure.”

Hill, a former top White House expert on Russia, testified at Trump's impeachment proceedings that Bolton distanced himself from the effort to leverage investigations from Ukrainians in exchange for a White House meeting – and warned that Giuliani was a “hand grenade” who was “going to blow up everyone,” according to transcripts.

But on Thursday, Giuliani reacted to the excerpts, saying that he “could prove” that he “never discussed what he says about the Ukrainian thing about me.”

BOLTON ACCUSES TRUMP OF 'OBSTRUCTION OF JUSTICE AS A WAY OF LIFE,' ASKING CHINA'S XI FOR HELP IN 2020 ELECTION

“He calls me a hand grenade,” Giuliani said. “I kinda feel, really, really complimented by that, because he’s a hydrogen bomb.”

"The statements this guy has made over 10 years and he’s calling me a hand grenade?" Giuliani continued. "Most presidents were too afraid to have him in the cabinet because they were afraid he’d take us to war over Central Park or something."

He added: "Bad guy. No character."

The president, meanwhile, unloaded on Bolton in an exclusive interview with Fox News' "Hannity" on Wednesday night. And, in a series of tweets early Thursday, Trump called Bolton a "Wacko," a "dope," and a "disgruntled boring fool who only wanted to go to war." Noting that The New York Times had described Bolton's book as "exceedingly tedious," Trump added: "President Bush fired him also. Bolton is incompetent!”

Bolton served as national security adviser from April 2018 to September 2019 and was United Nations ambassador in the George W. Bush administration.