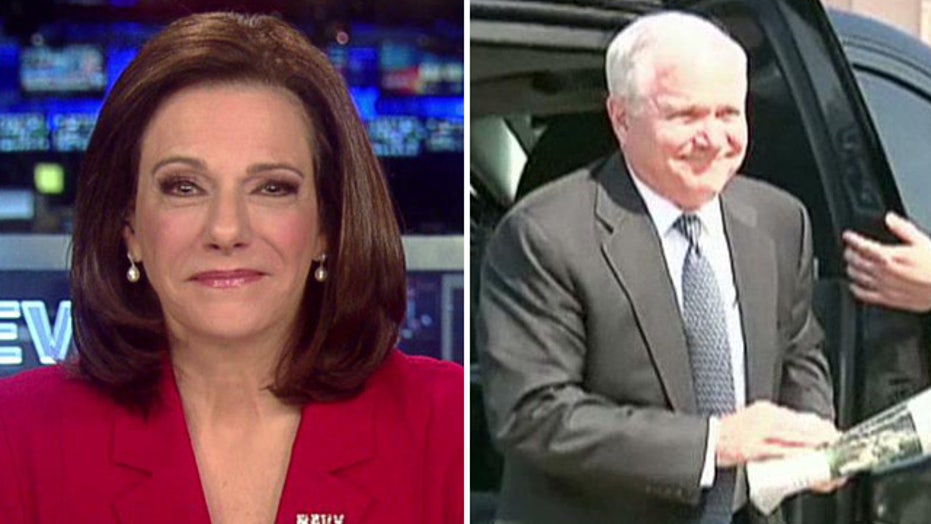 Gates 'disturbed' by Obama's absence of passion for military

Former secretary of Defense speaks out on controversial memoir

Former Defense Secretary Robert Gates sharply questions President Obama's "passion" for military matters in his forthcoming memoir, and claims that practically the only time he saw that in the president was during his push to repeal "don't ask, don't tell."

The former Pentagon chief said in an interview aired Sunday that he was "disturbed" by Obama's "absence of passion" when it came to his military strategy. But in the book, "Duty," reviewed by Fox News, Gates hit Obama harder -- and in personal terms -- by contrasting his style with that of former President George W. Bush.

"One quality I missed in Obama was passion, especially when it came to the two wars," Gates wrote. "In my presence, Bush -- very unlike his father -- was pretty unsentimental. But he was passionate about the war in Iraq; on occasion, at a Medal of Honor ceremony or the like, I would see his eyes well up. I worked for Obama longer than Bush, and I never saw his eyes well up."

Gates went on to suggest that the president was far more emotional about repealing "don't ask, don't tell" -- the policy barring openly gay people from serving in the military -- and passing the health care bill.

He wrote that "the only military matter, apart from leaks, about which I ever sensed deep passion on his part was 'Don't Ask, Don't Tell.' For him, changing the law seemed to be the inevitable next step in the civil rights movement. He presumably was also passionate about health care reform, but I wasn't present for those discussions."

"I think one of the things you take away, at least from the excerpts of this book, is that Bob Gates doesn't like any questions about Bob Gates," Gibbs said on NBC's "Meet the Press."

Gates, however, also revealed the details of a confidential Obama Transition Team document on defense matters written in late 2008 that suggests the new administration vowed privately that they were in the war in Afghanistan for the long haul "to win" -- but then backed away from that over time.

Gates revealed that the Obama transition, led then by current White House counselor John Podesta, had put together a 71-page report for the secretary of Defense that included several shots at the Bush administration -- even though the Pentagon would continue to be run by Bush's Pentagon chief.

"Restore wise, responsible, and accountable presidential leadership on national security," the report said at one point about the key goals of the new administration.

Gates raised questions about whether Obama met that test on Afghanistan by noting what the transition document said in late 2008 and early 2009 about the war.

"In light of later developments, the last sentence of the transition's Afghanistan paper was remarkable: 'From the beginning of the new administration, the President and his top advisers will need to signal firmly that the United States is in this war to win and have the patience and determination to do so,'" Gates wrote.

The significance of this passage is that while part of the White House defense this past week has been that the president has always said he wanted to get out of Afghanistan, Obama also suggested Afghanistan was the "good war" compared with Iraq.

Gates went on to write about how he believes that the president cares about the troops, but over the next few years gave few public speeches about the stakes in Afghanistan and did not show the troops he was really in the fight to win.

"Given his campaign rhetoric about Afghanistan, I think I myself, our commanders, and our troops had expected more commitment to the cause and more passion for it from him," Gates wrote.

Gates does repeatedly praise the president's judgment in his book. He wrote that although they had different political backgrounds he had to admit that "for the first two years, on national security matters, we largely saw eye to eye."

"It is well known that the president has been committed to achieving the mission of disrupting, dismantling and defeating Al Qaeda while also ensuring that we have a clear path for winding down the war, which will end this year," Press Secretary Jay Carney said.

"The mission and the policy included both ramping up and refocusing our mission on Al Qaeda as well as making sure we had a policy in place that would wind down that war, because a war without end was not what the president believed was the right policy. And there were debates about this. So the president believes thoroughly in the mission."

Podesta, meanwhile, might find another passage uncomfortable now that he is inside the White House.

Gates wrote that as transition chief, Podesta allowed the secretary to keep several top aides in place but initially pushed back on Gates keeping his longtime spokesman, Geoff Morrell.

"The Obama team tend to be control freaks," Podesta was quoted as telling Gates.

In the end, though, Gates was allowed to keep Morrell on board.

Then-House Speaker Nancy Pelosi, meanwhile, was not described in flattering terms when she learned early in the administration that the president wanted to initially keep more troops in Iraq than expected.

"I was sitting across from House Speaker Nancy Pelosi and thought she alternately looked like she had swallowed an entire lemon or was simply going to explode," Gates wrote. "She drummed her fingers on the table and had a white-knuckled grip on her pencil."