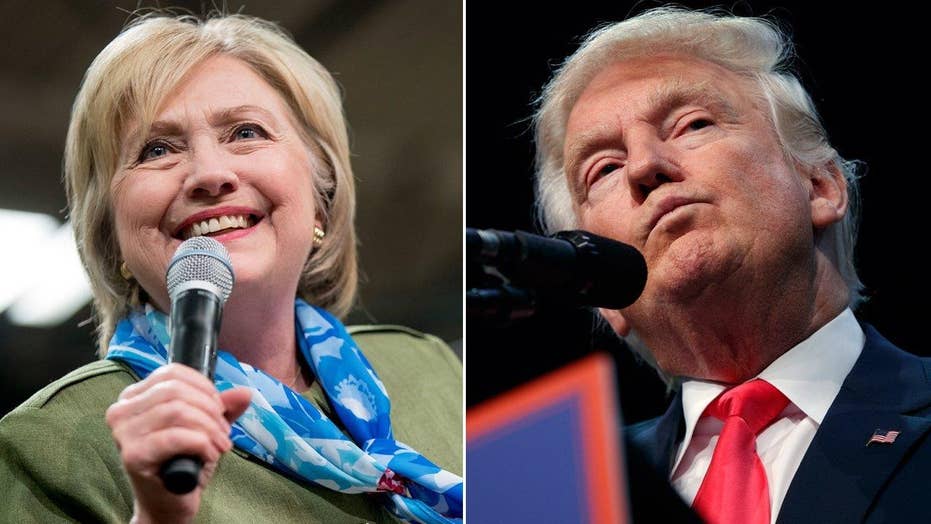 Lee Carter breaks down the numbers

Underwater -- that’s where the personal ratings for Hillary Clinton and Donald Trump remain.

That’s still better than her opponent.  Only 36 percent of voters have a positive opinion of Trump, while 63 percent feel the opposite, giving him a net score of -27 points.  That’s worse than his -18 rating in June.

"Voters are more comfortable voting for people they like, so this is not good news for either candidate," says Republican pollster Daron Shaw, who conducts the Fox News Poll along with Democratic pollster Chris Anderson. "The unfavorable ratings for the major party candidates we show here are almost unprecedented; the only numbers that are comparably bad were for David Duke in 1992, and he was not the party's nominee."

Clinton also does better than Trump among the party faithful.  She gets a favorable +61 score among Democrats compared to his net +43 rating among Republicans.

While Trump is viewed more positively among independents than Clinton, his net favorable is still -16.  She’s at -43 points among indies.

Some 17 percent of Clinton supporters have an unfavorable opinion of her, while for Trump that number is slightly lower (11 percent).

Among the small number of voters who are undecided or plan to support a third party, 21 percent have a favorable view of Clinton compared to just 8 percent who view Trump positively.

“With more voters already willing to hold their nose and vote for Clinton, and the fact that undecided voters are nearly three times more likely to have a positive view of Clinton than Trump, this election could get out of reach for Trump very soon without some major shakeup,” says Anderson.

Those numbers skyrocket among Democrats:  Bill Clinton gets a score of +76 points and Obama +87 points.

Even so, it’s Michelle Obama who receives the best ratings of all those tested.  She has a net positive +27 score overall (61 percent of voters have a favorable view of her vs. 34 percent unfavorable).  Among Democrats, it’s a whopping +89.

Bernie Sanders is liked as well:  60 percent favorable vs. 34 percent unfavorable.  That’s up significantly from a year ago, when it was 34-36 percent -- and 30 percent were unable to rate him.

Many voters are unfamiliar with the names at the bottom of the tickets.  Thirty-four percent of voters can’t rate or have never heard of Democratic vice presidential nominee Tim Kaine.  For Republican Mike Pence, that’s 36 percent.

Kaine has a score of +12 points overall and +42 among Democrats.  Pence garners a +5 rating among all voters and +49 among Republicans.

Many voters are also unfamiliar with the Libertarian presidential candidate Gary Johnson.  Voters view him positively with a 22-17 percent rating.  Yet 18 percent have no opinion and 44 percent say they’ve never heard of him.

But it’s a different story among partisans.  GOP women give Trump a +34 rating, and Clinton receives a +41 score among Democratic men.

The Fox News poll is based on landline and cellphone interviews with 1,022 randomly chosen registered voters nationwide and was conducted under the joint direction of Anderson Robbins Research (D) and Shaw & Company Research (R) from July 31-August 2, 2016.  The poll has a margin of sampling error of plus or minus three percentage points for all registered voters.