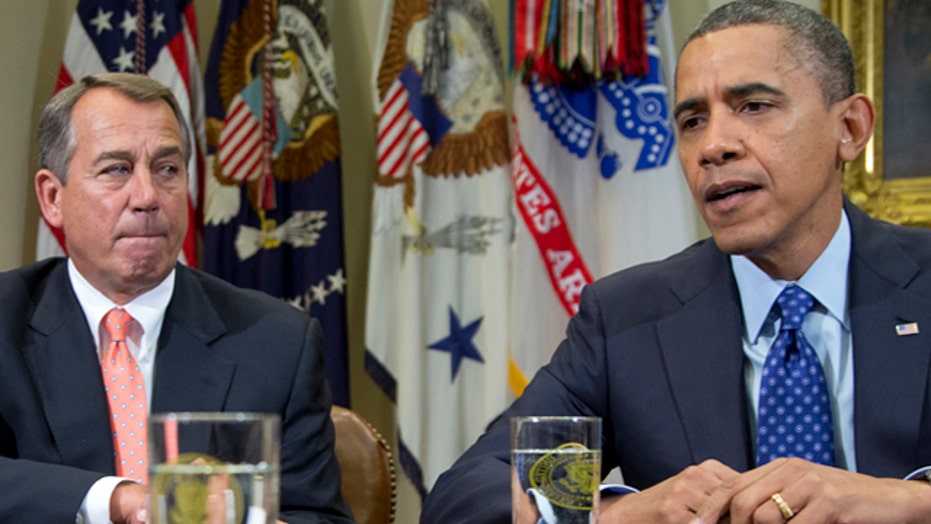 If Washington is looking for guidance on the fiscal cliff, voters are sending mixed signals.

A majority says major spending cuts are necessary to solve the country’s budget woes -- that solely raising taxes on taxpayers earning more than $250,000 isn’t enough. Even so, the most popular proposal among voters for reducing the deficit is -- you guessed it -- raising taxes on the rich.

In addition, while a majority of Republicans (59 percent) thinks major cuts to entitlement programs like Social Security and Medicare should be made now, even if it is tough on families, a majority of Democrats (52 percent) thinks those programs should continue to be funded at their current levels, even if it means passing on trillions of dollars of debt to future generations.

Overall, 61 percent of voters say major spending cuts are necessary to reduce the deficit, while 33 percent think increasing taxes on high earners would be enough. Half of Democrats think taxing the rich is all that is needed. By contrast, majorities of Republicans (77 percent) and independents (62 percent) think cutting spending is also necessary.

If income taxes go up, almost all voters -- 89 percent -- think President Obama should agree to make major cuts in government spending as well. That includes 83 percent of Democrats, 91 percent of independents and 95 percent of Republicans.

Meanwhile, by a 53-36 percent margin, voters think Obama will use the money from tax hikes primarily to increase government spending rather than to reduce the deficit.

Nearly 7 voters in 10 are “very” interested in the budget situation the federal government is facing. The so-called “fiscal cliff” means that unless the president and Congress reach an agreement, on January 1 tax rates will automatically go up for almost all Americans while spending on many government programs will automatically be cut.

By a 10-point margin, more voters than not think an agreement will be made before the deadline (51-41 percent).

While 34 percent of voters think the “only way” to get the deficit under control is for the country to go over the cliff, fewer -- 12 percent -- say they actually want the nation to do so.

One in five voters who describe themselves as “very” conservative wants the country to go over the fiscal cliff (19 percent).

More voters think the president (38 percent) has a plan to deal with the deficit issues than think the same about Republicans (26 percent). Still, majorities believe neither Obama (60 percent) nor congressional Republicans (70 percent) have a clear plan for the current situation.

Sixty-six percent of Democrats think Obama has a plan to handle the deficit. That’s much higher than the 35 percent of Republicans who think their party leadership does.

In general, voters think the best way to deal with the country’s deficit problem is mostly with cuts in government spending (57 percent) rather than tax increases (20 percent).

Still, increasing taxes on incomes exceeding $250,000 a year is the most popular proposal for dealing with the deficit, with 69 percent of voters favoring that option. It’s followed by reducing the number of government employees (65 percent), reforming Social Security (56 percent) and raising the minimum eligibility age for Medicare over time from 65 to 67 years (51 percent).

Views are split on reducing the amount of deductions taxpayers can claim on their taxes:  49 percent favor this measure, while 47 percent oppose it.

Overall, just over half of voters (51 percent) oppose reducing defense spending to help solve the budget problem. Fifty-six percent of Democrats favor cutting defense, while 65 percent of Republicans oppose it.

Fully 77 percent of voters believe all Americans should be required to pay some amount of federal income taxes -- even if it is as little as $100. Democrats (24 percent) and independents (22 percent) are more likely than Republicans (15 percent) to disagree with this.

Other highlights from the poll:
-- A 57 percent majority of voters ages 55 and over favors increasing the eligibility age for Medicare over time from 65 to 67 years.

-- Republicans (60 percent) and independents (56 percent) favor increasing the eligibility age for Medicare, while 57 percent of Democrats oppose it.

-- Sixty-five percent of voters living in households with income of $100,000 and higher favor increasing taxes on those earning more than $250,000 a year.

The Fox News poll is based on landline and cellphone interviews with 1,012 randomly chosen registered voters nationwide and was conducted under the joint direction of Anderson Robbins Research (D) and Shaw & Company Research (R) from December 9 to December 11.  For the total sample, it has a margin of error of plus or minus 3 percentage points.