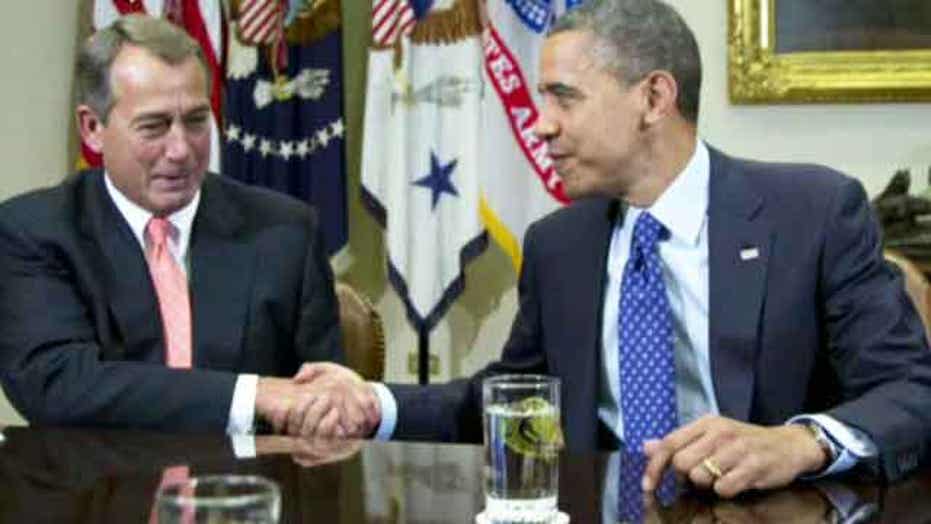 More than eight in ten American voters (83 percent) think government spending is out of control, according to a Fox News poll released Friday.  That’s up from 78 percent who said so in 2010 and 62 percent in 2009.  Some 11 percent think spending is being managed carefully.

Those are two of the reasons why President Obama begins his second term with mixed reviews:  47 percent of voters both approve and disapprove of his job performance.  A year ago 45 percent approved and 47 percent disapproved (January 2012).

The partisan divide evident during the 2012 presidential campaign is still apparent in Obama’s ratings:  84 percent of Democrats approve of his performance, while 87 percent of Republicans disapprove.  Independents are 12 percentage points more likely to disapprove (49 percent) than approve (37 percent).

Obama’s approval rating was highest his first month in office: four years ago 65 percent approved, while 16 percent disapproved and 19 percent were unsure (27-28 January 2009).  His lowest approval was 40 percent and came in December 2010, a month after Republicans swept the midterm elections.

Views are also divided on whether the president has kept his promise to not raise taxes on the middle class:  43 percent think he has, while 50 percent say he hasn’t.  And by a 54-36 percent margin voters think Obama is more interested in growing government than in reducing the debt.

Despite 60 percent of voters saying their paycheck is smaller this year because more taxes are being taken out, over half approve of the deal the president and Congress reached to avoid the fiscal cliff (53 approve, 42 disapprove).

On the upcoming debt ceiling debate, most voters side with the position of some Republican lawmakers who say Congress should only raise the debt limit after agreeing on major cuts (69 percent).  The president says it is Congress’s duty to raise the debt ceiling without demanding spending cuts to do so -- 23 percent agree with that position.

There is also broad agreement that government spending is out of control.  Almost all Republicans (98 percent) and independents (91 percent) say it is, and two-thirds of Democrats (66 percent) agree.

The president starts his new term with voters remaining gloomy on the economy.  Less than one percent rates it as “excellent,” and nine percent say the economy is in “good” shape.  That’s up just a touch from his first inauguration when the economy was, in Obama’s own view as well as others, on the edge of a second Great Depression.  At that time, five percent of voters rated the economy positively:  one percent “excellent” and four percent “good” (January 2009).

Just over half -- 51 percent -- give the economy the lowest rating of “poor.”  The good news is that’s a big improvement from the 74 percent rating it that way the week before Obama took office (January 2009).

Still, a 63-percent majority is dissatisfied with how things are going.  Fully 79 percent felt dissatisfied in early 2009, just days before the start of Obama’s first term.

Voters also remain unhappy with Congress:  16 percent approve of the job lawmakers are doing, while 76 percent disapprove.  The record-low approval for Congress was 10 percent in August 2011.

Dissatisfaction with Congress is so high that by a two-to-one margin voters think an “everyday American” could do a better job handling the country’s problems than most members of Congress (63-31 percent).

Views of both major political parties are in negative territory.  By a four percentage-point margin, more voters have an unfavorable than a favorable opinion of the Democratic Party.  Opinion of the Republican Party is even lower: by a 16-point margin more view the GOP unfavorably.

Eight More Years?
New York Rep. Jose Serrano (D) has introduced a bill to repeal the 22nd Amendment and allow a president to be elected to more than two terms. About 8 in 10 voters don’t like the idea.

To take a close look at the issue, the poll randomly split respondents into two groups and asked the question two ways.  The first group was asked specifically how they felt about changing the Constitution to allow Obama to seek a third term. The second group was asked how they felt removing the two-term limitation on presidents generally -- without mentioning Obama.

Did the way the question was worded matter?  Apparently not.  Those asked about allowing Obama specifically to seek a third term oppose the idea by a margin of 78-19 percent. Those asked the generic question oppose removing the term limit by 81-17 percent.

The Fox News poll is based on landline and cell phone interviews with 1,008 randomly chosen registered voters nationwide and was conducted under the joint direction of Anderson Robbins Research (D) and Shaw & Company Research (R) from January 15 to January 17.  The full poll has a margin of sampling error of plus or minus three percentage points.