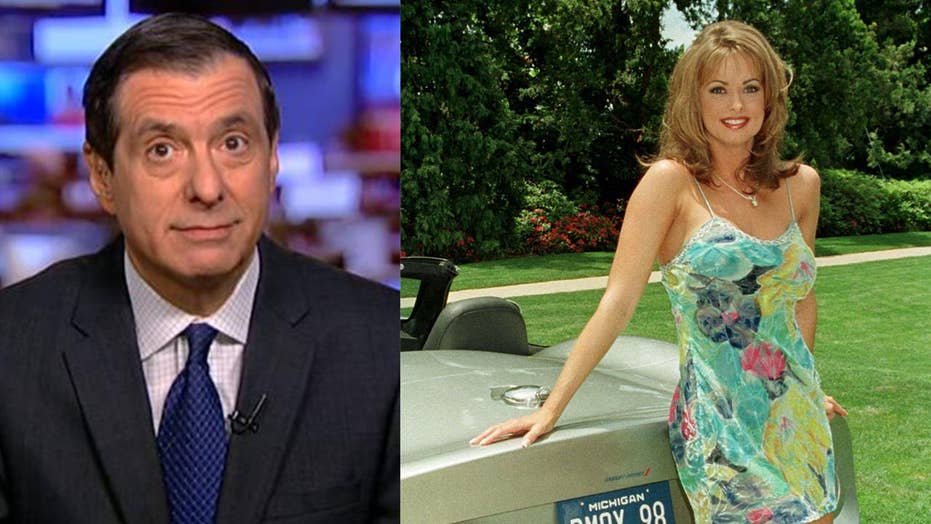 Karen McDougal, the former Playboy model who plans to tell her story tonight to CNN's Anderson Cooper, is claiming that the National Enquirer's parent company tried to intimidate her into keeping quiet about Donald Trump.

But there is more to the story, which plays out in correspondence between her lawyer and the company, American Media Inc.

The company's view, according to sources familiar with its stance, is that this is little more than a money grab by a woman who became dissatisfied with the $150,000 contract she had signed.

The media are going full tilt now that McDougal is one of three women making renewed accusations against the president. The second is Stormy Daniels, the ex-porn star who says she had an affair with Trump in 2006, and whose interview with Cooper is slated to air Sunday on "60 Minutes." The third is Summer Zervos, a former "Apprentice" contestant who says Trump made unwanted advances, and who just got a judge’s approval to pursue a defamation suit against him.

The president has denied the accounts of these and other women who surfaced during the campaign, and the degree to which the public cares about their allegations remains to be seen.

McDougal recently spoke to the New Yorker as it reported her account of a consensual affair with Trump starting in 2006, around the same time as the alleged relationship with Daniels. She did not address the affair directly, but Ronan Farrow obtained, most likely from her boyfriend, notes she made about the relationship during or after the 2016 campaign.

When the Enquirer's parent firm bought McDougal's limited life rights and other services in the fall of 2016, it was widely viewed as a case of "catch and kill"—buying a story in order to bury it. AMI is owned by David Pecker, a friend of Trump who is said to have done the president such favors.

But the contract also called on McDougal to write columns and appear on two magazine covers, which became a point of contention.

Last month, McDougal's then-lawyer, Carol Heller, wrote to AMI that they were inundated with questions about her relationship with the company and wanted to do interviews. (McDougal is allowed to respond to "legitimate press inquiries" under a contract amendment added after the 2016 election.) Heller also raised the notion of renegotiating the deal—which the company viewed as a way of demanding more money in exchange for staying quiet about Trump.

AMI wrote back that the wave of questions was McDougal's own fault, as a result of talking to the New Yorker's Ronan Farrow. The company said it was negotiating the sale of McDougal's limited life rights, and that those talks would be damaged by any further publicity. This, said AMI, would a breach of McDougal’s contract and subject her to substantial financial damages.

Her new lawyer, Peter Stris, may have had this in mind when he said "a quarter billion dollar company posing as a media organization systematically intimidated and silenced Karen McDougal in order to achieve its political and financial ends, and she will no longer be quiet." (Stris did not respond to a request for comment.)

McDougal said in her own statement that "AMI lied to me, made empty promises, and repeatedly intimidated and manipulated me."

AMI denied trying to silence McDougal, saying in a statement that she "has been free to respond to press inquiries about her relationship with President Trump since 2016."

The sources said AMI had been approached by a network and was in talks about producing a story on the alleged McDougal-Trump relationship.

AMI believes McDougal breached the contract by talking to the New Yorker and would commit an even more blatant breach if she goes ahead with the CNN interview.

American Media last month agreed to feature McDougal on the cover of Men's Journal—the second of two covers required by the contract—and tried to set up a March 13 photo shoot. The company even specified that the former Playmate of the Year wouldn't have to wear a bathing suit and could choose her own clothing.

Despite several emails, McDougal never agreed to the photo shoot.

As for her columns, McDougal herself wrote to AMI earlier this month and balked at a request to write a second piece for the month, saying she is only obligated to write one a month. (The contract calls for six columns a month but the understanding is that a single monthly piece would run in six outlets.)

This correspondence would seem to undercut McDougal's argument that AMI wasn’t giving her enough exposure under the deal.

As with Stormy Daniels, the lawyers will fight over the fine print and whether both women are flouting non-disclosure agreements that they voluntarily signed.

The question for the court of public opinion is whether Trump and his tabloid ally are trying to suppress both women’s stories.

Unlike Bill Clinton, the alleged infidelities occurred back when he was a celebrity businessman, not living in the White House.