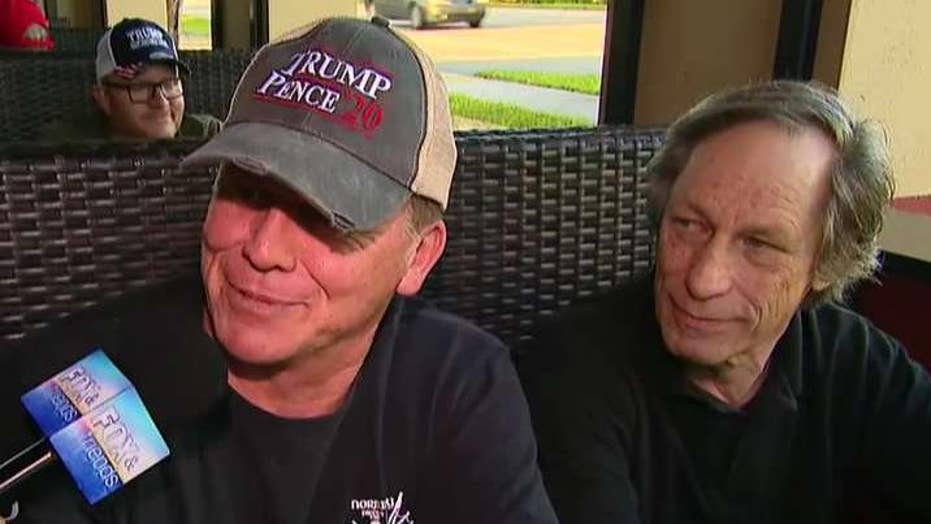 Patrons at the Flashback Diner in Boca Raton, Florida speak out on attending the president's 'homecoming' rally.

President Trump seemed to declare himself a heavyweight champion in politics on Wednesday, tweeting out a picture of his face superimposed onto one of actor Sylvester Stallone as Rocky.

The tweet, which didn't include any context, came after polling showed voters souring on impeachment and as House Democrats prepare another round of hearings in the ongoing impeachment inquiry. On Tuesday, Trump denounced Democrats' inquiry to a packed rally in Florida.

“First it was the Russia hoax,” Trump said. “And now the same maniacs are pushing the deranged ... impeachment” narrative.

For the past few months, Trump has been fending off accusations that he sought to influence the 2020 election by pressuring Ukraine to investigate former Vice President Joe Biden.

The president and Republicans have denied any wrongdoing and repeatedly portrayed Trump as the victim of a partisan attempt to overturn the 2016 election.

"It is a Democrat Scam that is going nowhere but, future Presidents should in no way be compromised. What has happened to me should never happen to another President!" Trump tweeted Tuesday.

Trump also tweeted a clip of Fox News host Pete Hegseth reporting on the massive crowd size of Tuesday night's rally in Florida. During interviews with Hegseth, rally attendees expressed their support for the president.

"I come from a family of Democrats and I just can't take the swamp anymore," one attendee said. Another said that he grew up as a Democrat but became a "staunch supporter of Trump."

On Twitter, Trump faced a wave of mockery for posting a photo of his face on Rocky's body. Some knocked his physical appearance, suggesting that he was nowhere near the shape that Rocky was. It also comes as Trump is dismissing rumors he had a health scare after a recent visit to Walter Reed Medical Center.

The photo also seemed to indicate Trump's mood going into the second round of impeachment hearings, led by the House Judiciary Committee.

Rep. Jerrold Nadler, D-N.Y., the committee's chair, sent a letter to Trump, apparently welcoming a challenge for the first hearing, which is scheduled for Dec. 4.

In his invitation to the president, he asked whether “you and your counsel plan to attend the hearing or make a request to question the witness panel.”