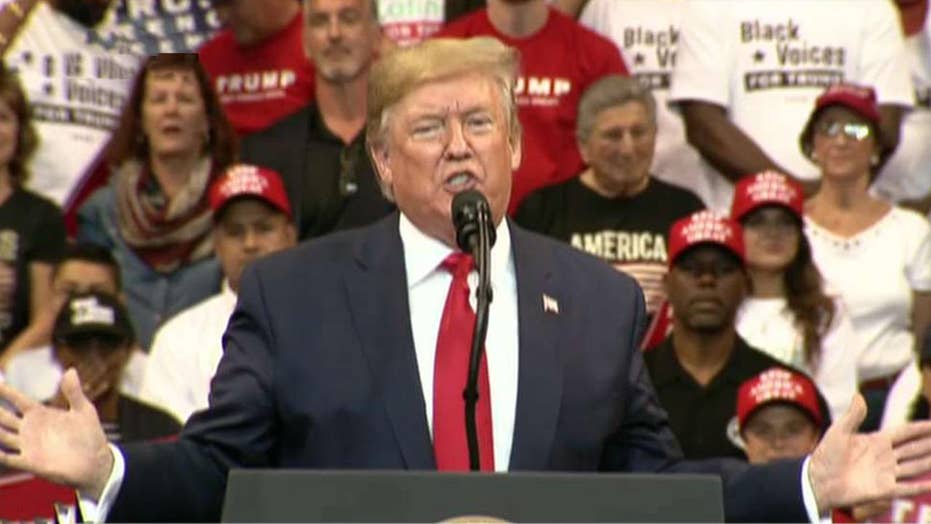 Trump: President of Ukraine says there was no pressure put on him

President Trump took the stage in Sunrise, Fla. Tuesday night to address supporters at what his reelection campaign rally dubbed a “homecoming rally”  before the start of his Thanksgiving break at Mar-a-Lago, his new primary residence.

Tuesday's rally marked his first official campaign visit to the Sunshine State since he changed his state of residence from New York, and he made a point of telling Florida voters that “less than one year from now I will join voters across the Sunshine State, my home, as we head to the polls.”

Trump claimed his residency change was motivated by the poor treatment he was receiving from New York politicians investigating him. However, Florida's far more attractive tax rates could have played some part in the decision as well.

Winning Florida will be crucial for the president’s reelection. Trump won the state over Hillary Clinton by 110,000 votes, but Tuesday's rally took place in one of the most Democratic areas of the state. Clinton overwhelmingly won Broward County, where Sunrise is located, in 2016. 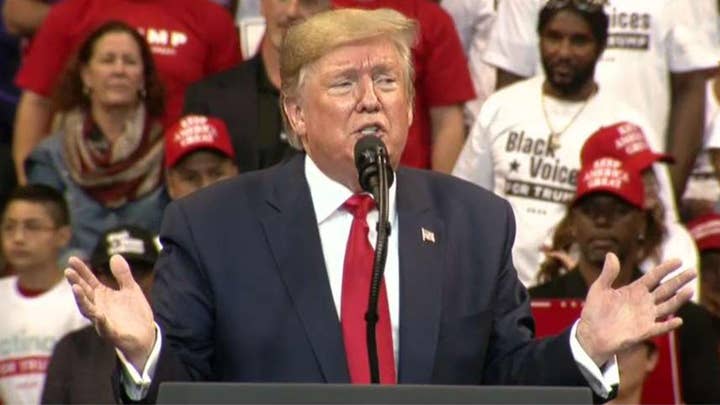 About 200 anti-Trump protesters rallied on a street outside the BB&T Center before the president arrived. They raised a helium-filled “Baby Trump” balloon, and some chanted, “Lock him up.”

However thousands inside the arena broke out in chants of  "four more years," and "USA, USA." During Vice President Mike Pence's introductory remarks, a chant of "Conan, Conan" broke out when Pence mentioned the Belgian Malinois that played a starring role in the raid that killed Islamic State leader Abu Bakr al-Baghdadi.

"Our troops are coming home and Conan the hero dog is just fine," Pence told the crowd.

The president touted his administration's record on the economy, noting that the stock market just reached another all-time high: "Everybody's getting rich and I'm working my a-- off." He also noted the 6.7 million new jobs created under his administration and the almost 600,000 jobs created in Florida since 2016.

Trump also worked to butter up voters as he described his supporters as the "super-elite."

"You people are successful as hell," he told them. "You're smarter. You're better looking. You're sharper."

Trump also spent time discussing recent controversies, including an unannounced trip he paid to Walter Reed National Military Medical Center on a Saturday earlier this month, assuring the crowd that if he "didn't feel great," he "wouldn't be ranting and raving" to crowds so large.

Trump also defended his decision earlier this month to pardon two soldiers accused or convicted of war crimes, including Army 1st Lt. Clint Lorance, who was six years into a 19-year sentence for second-degree murder after he ordered his soldiers to open fire and kill three men in Afghanistan.

"We're going to take care of our warriors," the president said, referring to officers who reportedly opposed the pardons as "the deep state." "I will always stick up for our fighters, people can sit in their air-conditioned offices and complain." 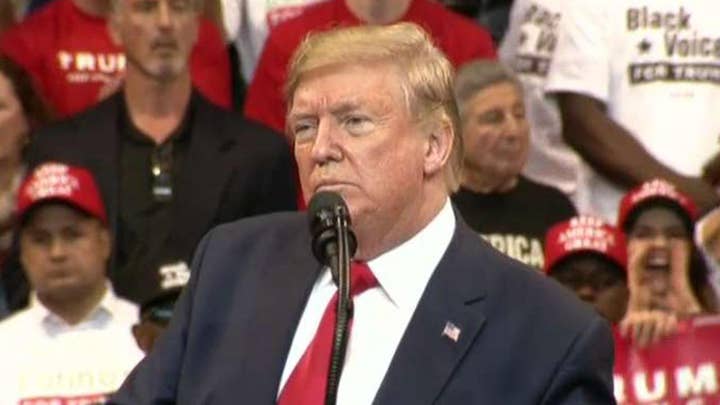 He then pivoted to impeachment, accusing what he called "the radical left Democrats" of "trying to rip our nation apart."

"First it was the Russia hoax, total hoax, a failed overthrow attempt and the biggest fraud in the history of our country," Trump said. "Now the same maniacs are pushing the deranged impeachment, a witch hunt the same as before."

The president pointed to polls that show the public to be ambivalent about impeachment.

"A lot of bad things are happening to them," he said. "You see what's happening in the polls? Everybody said, 'You know what? That's real bulls---.'"

Trump also criticized the media's coverage of the House Intelligence Committee's public impeachment hearings, saying he "won these last two weeks so solidly, but anyone who read The New York Times or The Washington Post "would have no idea we won."

The president repeated his assertion that Ukraine President Volodymyr Zelensky said there was "no pressure" to investigate the Bidens.

"The Ukrainian foreign minister said 'Ambassador [to the European Union Gordon] Sondland did not tell us about assistance,'" said Trump. "I have never had a direct link between security aid and an investigation."

Trump said Republicans asked him if they could keep the impeachment debate going longer. "They said,' Sir, can we keep this sucker going a little longer? We've never seen anything like it in the polls."

The president also implored congressional Democrats to take action on the USMCA trade agreement, vowing that it would be an improvement on "the NAFTA catastrophe, if [House Speaker] Nancy Pelosi will ever sign it."

"We're waiting months, she doesn't want to give the people of our country a victory," said Trump. "She and the Democrats have done nothing, they're doing nothing.

"Nancy's on track to go down as the single worst and least productive Speaker of the House in our history."