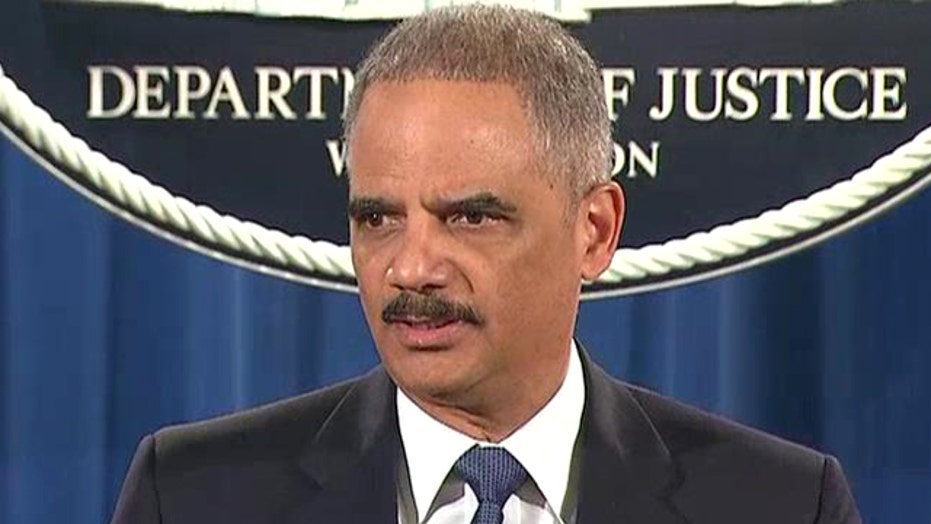 The Justice Department announced Wednesday that it will not prosecute former Ferguson, Mo., police officer Darren Wilson in the shooting death of an unarmed black 18-year-old, while also releasing a report faulting the city and its law enforcement for racial bias.

Specifically, the DOJ said there was "no evidence" to disprove Wilson's testimony that he feared for his safety, nor was there reliable evidence that Michael Brown had his hands up when he was shot.

The report said: "Although there are several individuals who have stated that Brown held his hands up in an unambiguous sign of surrender prior to Wilson shooting him dead, their accounts do not support a prosecution of Wilson.‎ As detailed throughout this report, some of those accounts are inaccurate because they are inconsistent with the physical and forensic evidence; some of those accounts are materially inconsistent with that witness's own prior statements with no explanation, credible or otherwise, as to why those accounts changed over time."

The decision in the Aug. 9 shooting had been expected, in part because of the high legal standard needed for a federal civil rights prosecution. Wilson, who has said Brown struck him in the face and reached for his gun during a tussle, also had been cleared by a Missouri grand jury in November and later resigned from the department.

But the DOJ, in its evaluation of the police department itself, said blacks in Ferguson are disproportionately subject to excessive police force, baseless traffic stops and citations for infractions as petty as walking down the middle of the street.

The report also cited "evidence of racial bias" in emails by Ferguson officials. They included one April 2011 email that "depicted President Barack Obama as a chimpanzee"

Attention now turns to Ferguson as the city confronts how to fix racial biases that the federal government says are deeply rooted in the police department, court and jail.

"Now that our investigation has reached its conclusion, it is time for Ferguson’s leaders to take immediate, wholesale and structural corrective action," Attorney General Eric Holder said Wednesday.

Holder said the Justice Department had two sets of immediate recommendations: increased civilian involvement in police decision-making and police misconduct allegations, and changes to the municipal court system, including modifications to bond amounts and detention procedures, an end to the use of arrest warrants as a means of collecting owed fines and fees, and compliance with due process requirements.

Similar federal investigations of troubled police departments have led to the appointment of independent monitors and mandated overhauls in the most fundamental of police practices. The Justice Department maintains the right to sue a police department if officials balk at making changes, though many investigations resolve the issue with both sides negotiating a blueprint for change known as a consent decree.

"It's quite evident that change is coming down the pike. This is encouraging," said John Gaskin III, a St. Louis community activist. "It's so unfortunate that Michael Brown had to be killed. But in spite of that, I feel justice is coming."

Others said the federal government's findings confirmed what they had long known and should lead to change in the police department leadership.

Brown's killing set off weeks of protests and initiated a national dialogue about police use of force and their relations with minority communities.

The findings of the investigation, which began weeks after Brown's killing last August, were released as Holder prepares to leave his job following a six-year tenure that focused largely on civil rights. The report is based on interviews with police leaders and residents, a review of more than 35,000 pages of police records and analysis of data on stops, searches and arrests.