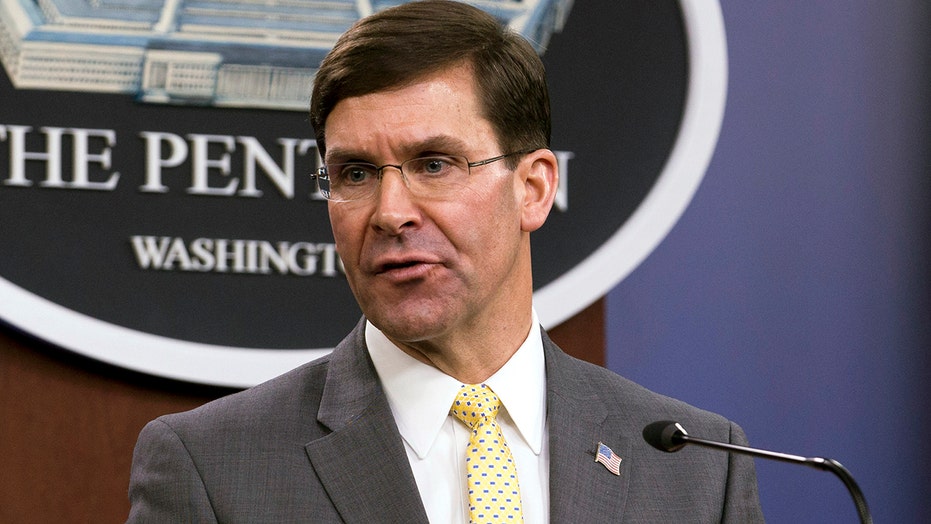 The Department of Defense announced new travel restrictions on U.S. service members and their families, which will be in place for the next 60 days, as the U.S. government works to fight the spread of the coronavirus.

"The Department of Defense's top priority remains the protection and welfare of our people," Secretary of Defense Mark Esper said in a press release. "While directing this prudent action, I continue to delegate all necessary authority to commanders to make further decisions based on their assessments to protect their people and ensure mission readiness. While we deal with this fluid and evolving situation, I remain confident in our ability to protect our service members, civilians and families."

LATEST ON THE CORONAVIRUS

"Level 3" countries include China, Iran, South Korea, Italy and the continent of Europe. There is also a "Level 3" restriction to Venezuela, not because of the coronavirus but because of the lack of health infrastructure in the socialist country. Wednesday night the CDC also issued a global "Level 2" alert due to the worldwide spread of the coronavirus, which on Wednesday was declared a pandemic by the World Health Organization.

A press release announcing the move also notes that secretaries and commanders can make exceptions to the travel restriction as they deem necessary.

The Defense Department's move to limit the travel of military service members and their families comes as President Trump issued a ban on travel into the U.S. from Europe -- similar to the one he issued weeks ago on travel from China -- as the coronavirus has spread widely there, especially in Italy. Goods shipped from Europe will be allowed into the United States, but not people.

"There will be exemptions for Americans who have undergone appropriate screening, and these prohibitions will not only apply to the tremendous amount of trade and cargo, but various other things as we get approval," Trump said in a Wednesday night address from the Oval Office. "Anything coming from Europe to the United States is what we are discussing."

The U.S. State Department is also suspending all non-essential travel for department staffers, according to Reuters, which cites anonymous sources.

While the federal government is taking precautions to limit the spread of the coronavirus, so are many other entities nationwide. School districts and universities are canceling classes or moving them online and the NBA has suspended its season after a player tested positive for coronavirus.

In a striking move, the NCAA has announced it will play its annual March Madness basketball tournament -- the source of the vast majority of the organization's yearly revenue -- without fans.

There were some good signs on the global spread of the coronavirus on Thursday, however, as the Chinese National Health Commission announced that it believes the communist nation is past the worst of the coronavirus spread, according to Reuters. The country was blamed for exacerbating the global spread of the disease by obfuscating the initial severity of the problem within its borders and failing to work with other countries to combat the coronavirus, which is believed to have originated in the Chinese city of Wuhan.