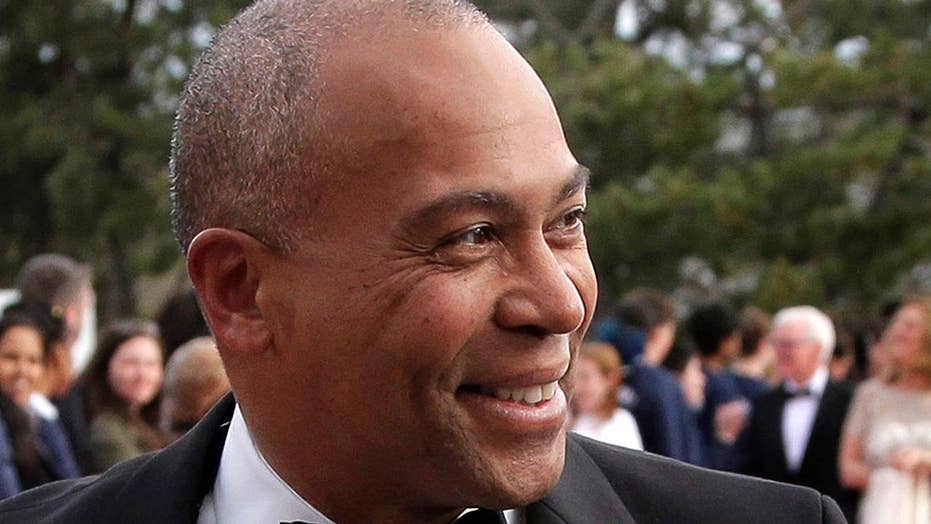 But he noted that the former vice president’s “deep, deep, public empathy doesn’t always come through in this campaign.”

And he took another dig at Biden’s emphasis on ousting President Trump and returning to the normalcy of his eight years as President Barack Obama’s vice president.

"The instinct that his campaign seems to have to say, to project in effect ‘if we just get rid, if you will, of the incumbent, we can just go back to doing what we used to do,’ misses the moment," Patrick argued.

The late entry into the race by Patrick could present a threat to the former vice president. It appears Patrick will run a center-left campaign, fighting for the same voters that Biden and South Bend, Ind. Mayor Pete Buttigieg have been successfully courting. And he could give Biden a fight in the former vice president’s early voting state stronghold of South Carolina, where black voters make up a majority of the Democratic primary electorate.

Patrick could also pose problems for fellow Bay Stater Elizabeth Warren. The senator from Massachusetts is now a co-front-runner in the polls alongside Biden, with Buttigieg and Sen. Bernie Sanders, I-Vt., also part of the top tier of candidates in the early voting states of Iowa and New Hampshire.

"I want to acknowledge my friendship and my enormous respect, in particular with Senator Warren," Patrick told Fox News. "I talked to her last night and I think it was a kind of hard conversation for both of us frankly.”

Asked about the government-run programs that Warren and Sanders are proposing, such as "Medicare-for-all," Patrick praised both of the populist Democratic standard-bearers but added: “I think that if we want solutions that last, they can’t be solutions that feel to the voting public as if they are just Democratic solutions.”

Despite his criticisms of Warren and Biden, Patrick insisted he didn’t want to play the role of a political pundit and emphasized: “Let me be clear about a ground rule for me going forward. I am not trying to climb up by trying to pull anyone else down.”

Patrick also told reporters that he wouldn’t object to an outside group – such as a super PAC that can accept unlimited contributions – assisting his campaign.

“It would be hard for me to see how we put all the resources together for an effective campaign without a PAC of some kind,” he said. “I wish it weren’t so. I wish campaigns weren’t as expensive and I wish that the influence of money that we’ve seen in Washington wasn’t as great as it is.”

Biden has been criticized by many of his rivals for not speaking out against a newly formed super PAC that’s hoping to raise millions of dollars on behalf of the former vice president’s White House bid.

But he highlighted that “voters all across the country in some cases are just tuning in and in many cases haven’t made their decisions.”

And Patrick – a long-shot who went on to win the Massachusetts governorship in the 2006 election – emphasized that “I understand what we have to do but you know what, I’ve lived a political life and I would say as a black man, a whole life dealing with skepticism.”

Patrick served as U.S. Assistant Attorney General for the Civil Rights Division from 1994-1997 under President Bill Clinton. After serving his two terms as governor, Patrick took a job with Bain Capital, the Boston-based private investment firm that became a liability to Mitt Romney – Patrick’s predecessor as Massachusetts governor – during Romney’s 2012 presidential campaign. Patrick’s tenure at the firm will likely be in the spotlight in the 2020 race.

Asked about the liability, Patrick told reporters “I smile because when I was co-chair of the Obama-Biden campaign in 2012 and there was all the attacks on Bain Capital on account of Mitt Romney, I was asked about that and I didn’t buy it then and I don’t buy it now.

The former governor mulled launching a presidential campaign last year, assembling a team of advisers and enjoying the backing of some of former President Barack Obama’s top political aides. But late last year, Patrick announced he wouldn’t run, pointing to the “cruelty of our elections process.”

Patrick said “I was ready to go last year… we got really, really close.” But he noted that just two weeks before Thanksgiving, his wife Diane was diagnosed with uterine cancer “and it’s the sort of thing that brings you right back to earth and I felt that the right thing to do for her, for us, was to focus on that.”

He explained that his wife is now cancer free.