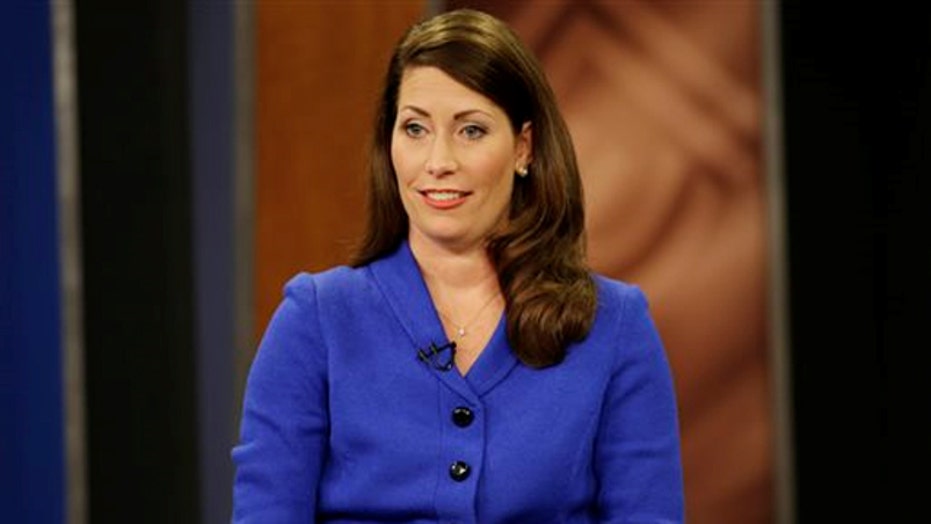 Democratic Party honchos are pulling back on their support of Alison Lundergan Grimes, the groomed candidate who represented the party’s best hope for unseating Senate GOP Leader Mitch McConnell in Kentucky.

The Democratic Senatorial Campaign Committee, after spending $2 million on the race, went off the air Tuesday, while a separate Democratic campaign group reportedly was doing the same.

Meanwhile, national progressive groups lashed out at Grimes for an ad on illegal immigration that they called “offensive.”

The developments are a blow to Grimes, who already has been battered by pro-McConnell attack ads and seen her standing in the polls slip a bit. She also has been hammered for refusing to say – during a debate on Monday and on other occasions – if she voted for President Obama in the last two elections, even though she was a delegate for the president at the Democratic National Convention in 2012.

The DSCC, which is Senate Democrats’ chief campaign arm, confirmed to Fox News that it is not currently on the air in Kentucky, despite a recent $1.4 million ad buy. But a DSCC official said the group would continue to make “targeted investments in the ground game while monitoring the race for future investments.”

The committee is continuing to fund get-out-the-vote operations in Kentucky, and could potentially resume ads sometime before the election.

But in perhaps a sign of shifting priorities, Democrats chose to put nearly $1 million behind Michelle Nunn, challenging for a Georgia seat now in Republican hands.

Grimes sounded defiant while campaigning in northern Kentucky on Tuesday.

"He can buy the airwaves, but he can't buy the hearts and minds of Kentuckians," she said of McConnell.

Even as the DSCC confirmed it was going off air, Grimes’ campaign put out a statement touting their recent fundraising. The campaign said it has nearly $4.4 million cash on hand – “more than any Democrat in a competitive U.S. Senate race.”

The Grimes campaign on Wednesday also put out a memo saying the nominee is positioned for a "strong finish" in the race, arguing that despite recent developments the campaign is not struggling for funding. "Recent process stories and pundit hyperventilating have focused on issues proven to have no impact on the fundamentals of this race -- and ignore key factors and data that will determine the actual outcome," the memo from campaign manager Jonathan Hurst said.

Grimes' campaign continues to air ads, including one that accuses McConnell of supporting amnesty for 3 million immigrants living in the country illegally.

But that ad is causing headaches for Grimes. MoveOn.org, a liberal political action committee, has called on the Democrat to pull the ad because it refers to immigrants as "illegal aliens."

The group Democracy for America also urged Grimes to take down the “offensive” ad.

“It's simply wrong for any Democrat to use right-wing talking points and dehumanize struggling immigrant families,” DFA Director Charles Chamberlain said in a statement.

Grimes was heavily recruited by Democrats to challenge McConnell, but her support has slipped in recent polls under the weight of attacks by the five-term Senate Republican and his allies.

While McConnell has been plagued by low approval ratings, he has sought to turn the election into a referendum on Obama, who is even more unpopular in the state.

Grimes has proven to be a formidable fundraiser, besting McConnell by nearly $1 million in the second fundraising quarter. Her campaign announced Tuesday it had raised $4.9 million in the quarter ending Sept. 30, breaking her own state fundraising record.

Despite that, Grimes' campaign has been outspent by McConnell and his network of super PACs by tens of millions of dollars.

The United Mineworkers of America, which endorsed Grimes over McConnell, started running $318,000 worth of TV ads attacking McConnell in the Evansville, Indiana, and Charleston, West Virginia, markets that cover much of Kentucky's coal fields.

But on the same day, the Kentucky Opportunity Coalition, the super PAC supporting McConnell, launched yet another $1.2 million TV ad buy that again connects Grimes to Obama.