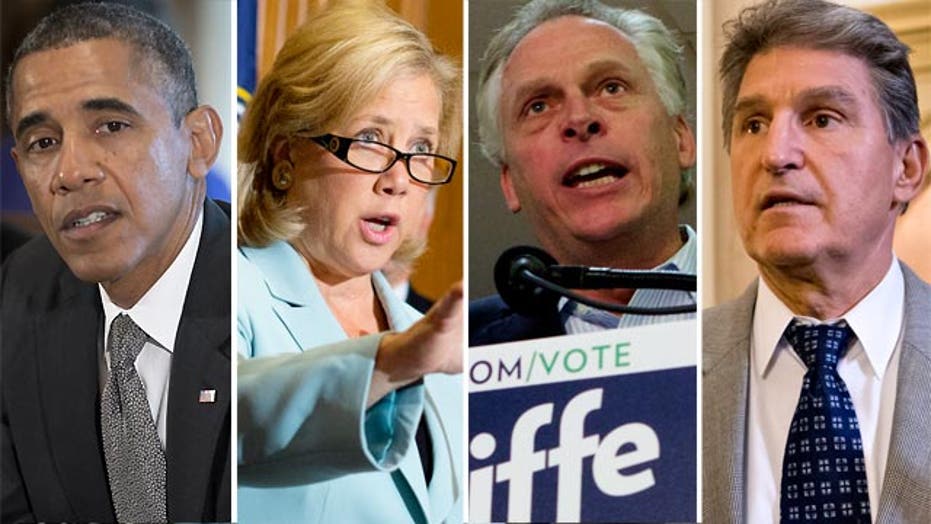 How Democrats are handling ObamaCare glitches and will the Washington Redskins change their name?

President Obama is asking Democrats to “grind it out” and stick with him and his embattled new entitlement program despite a disastrous launch and new revelations that he misled voters with claims about being able to keep their insurance.

That may work for the blue-state true believers the president spoke to in Boston on Wednesday, but “grind it out” isn’t exactly an ideal swing-state strategy. With approval for Obama and ObamaCare damaged in the rollout crash and concerns mounting rather than receding, the president’s request is a substantial one. “Grind it out” means grinding down their own poll numbers.

In purple state Virginia, the ObamaCare crash has already singed Democrat Terry McAuliffe, the Clinton retainer and moneyman who was previously cruising to election over Republican Ken Cuccinelli. McAuliffe, running as a Clinton Democrat, had worked hard to steer clear of ObamaCare issues and was instead focused on Republican obstructionism as his preferred Washington issue. And that was a winner in a state home to so many federal employees and contractors.

But then came the crash. As this week began, McAuliffe was campaigning with former President Bill Clinton, talking about working across the aisle and riding a 9-point lead in the Quinnipiac University poll. But this Sunday, McAuliffe will find himself only 3 points ahead and campaigning with Obama, namesake of the unpopular law.

Obama will do what he always does in politics: fire up the party’s liberal base and attack Republican efforts. Democratic turnout, especially among black voters, will be key to McAuliffe’s hopes of holding on for the win. But are a few rounds of “Yes we can!” worth reminding suburban moms that McAuliffe has vowed to make the commonwealth a full participant in the law? Such anxiety was enough to help a Republican win a special election in Massachusetts in 2010. McAuliffe may be quietly wishing Obama would limit his Virginia visits to rounds of golf at Ft. Belvoir.

If that’s the case in a state Obama won last year by 3 points, how’s the ObamaCare crash playing in one the president lost by 17 points?

Sen. Mary Landrieu, D-La., will offer her own bill that will allow Americans to keep their existing insurance plans, outbidding Republicans.

When news broke this week that the president for years led voters to believe they could keep their coverage under his insurance overhaul despite knowing otherwise, Republicans pounced offering legislation to block the Obama rules banning low-post, bare-bones coverage.

Landrieu, facing a tough re-election fight in a Republican state, is jumping the line with a bill of her own.  “The promise was made and it should be kept,” Landrieu told the New Orleans Times-Picayune. “And it was our understanding when we voted for that, that people when they have insurance, could keep what they had. So, I’m going to be working on that fix.”

Doesn’t sound like Senator Landrieu wants to “grind it out” for ObamaCare.

Sen. Joe Manchin, D-W.Va., isn’t grinding it out, either. He is preparing his own legislation that would delay by a full year the imposition of ObamaCare fines for those who don’t buy insurance, despite administration veto threats. The magnitude of the technical failures surrounding the program are so vast that such a delay may be just the starting point of negotiations, especially if the first revelations of signup data reveal a low number of paying customers.

Obama’s job approval rating skidded to 42 percent, his lowest-ever rating in the poll. That’s an 11-point drop from his job approval rating following his re-election and 5 points since last month. Disapproval for the health law shot up to 47 percent, 10 points ahead of approval, double the gap from earlier this month.

It was a dire WSJ/NBC News poll that drove Republicans to the exits on the partial federal shutdown three weeks ago. Now it’s the Democrats turn for a fright. The president’s tanking poll numbers and the surge in concern over the beleaguered ObamaCare rollout will push more moderate Democrats to conclude that their best path is away from the president and his law. Shutdowns are temporary. ObamaCare is forever.

The frustrations among the Obama Democrats mirror those of Republicans who backed former Sen. Jim DeMint’s “de-fund ObamaCare” gambit ahead of the shutdown.

Like DeMint and his allies, the president and his supporters believe that if more moderate members of their party were willing to go against their beliefs and endure seasick poll numbers that they could win an ideological victory as well as a political one. Just grind it out for a while and it will all work out.

Moderate Republicans weren’t willing to grind their way through the shutdown. Moderate Democrats aren’t going to grind out the ObamaCare crash, either.