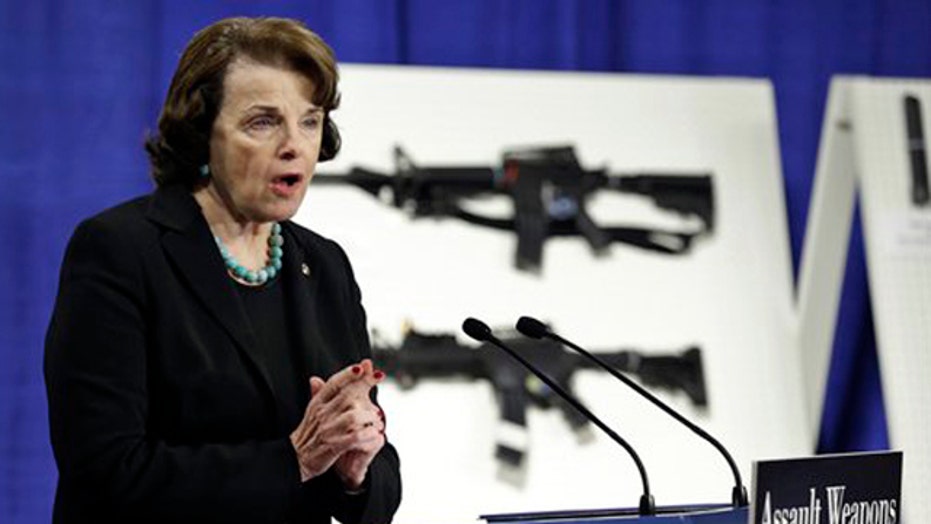 Congressional Democrats introduced a new and broader assault-weapons ban Thursday, in a vivid press conference that included a display of various weapons they want to outlaw.

It was a measure that was quickly condemned by the National Rifle Association as an assault on the Constitution, "instead of prosecuting criminals or fixing our broken mental health system."

The measure was written by Democratic Sen. Dianne Feinstein, who was behind the original 1994 assault-weapons ban which expired in 2004. It marks the first major legislative step since President Obama, in the wake of the Newtown school shooting, called for new gun control measures including a new and stronger assault-weapons ban.

"Our weak gun laws allow these mass killings to be carried out again, and again, and again in our country," Feinstein said. "Weapons, designed originally for the military to kill large numbers of people in close combat, are replicated for civilian use."

She said the bill she and her colleagues are introducing would bar the "sale, transfer, manufacture and importation" of assault weapons. It would also ban magazines that hold more than 10 rounds.

The move comes after NBC News host David Gregory faced an investigation for displaying a banned magazine on a Sunday show in the District -- but the Senate sergeant-at-arms office said the weapons were displayed Thursday in "compliance" with all applicable laws.

The office said they are "authentic" and in the custody of the Philadelphia and D.C. police departments, which brought them.

The weapons ban, though, faces long odds even after last month's mass school shooting in the state of Connecticut.

In a statement, Republican Texas Sen. Ted Cruz said the proposal would have done "nothing" to prevent the Newtown tragedy and vowed to fight to defeat the bill.

"Washington politicians shouldn't be taking advantage of recent tragedy to try to push an aggressive gun control agenda. Real assault weapons -- machine guns -- are already functionally illegal, and they have been since 1934," he said.

The last ban expired in 2004 when Congress refused to renew it under pressure from the National Rifle Association, a gun advocacy group. There's continuing disagreement about the effectiveness of the original assault-weapons ban, and measures like beefed-up background checks on gun sales may be more likely to pass.

Definitions of what qualifies as an assault weapon have varied over time and across states.

According to a summary from Feinstein's office, her bill would place bans on 120 "specifically named firearms," as well as certain other semiautomatic guns -- and those with a fixed magazine that can hold more than 10 rounds.

Feinstein's office says the bill would grandfather in weapons legally owned before enactment and exempt more than 900 "specifically named weapons" for hunting or sporting purposes.