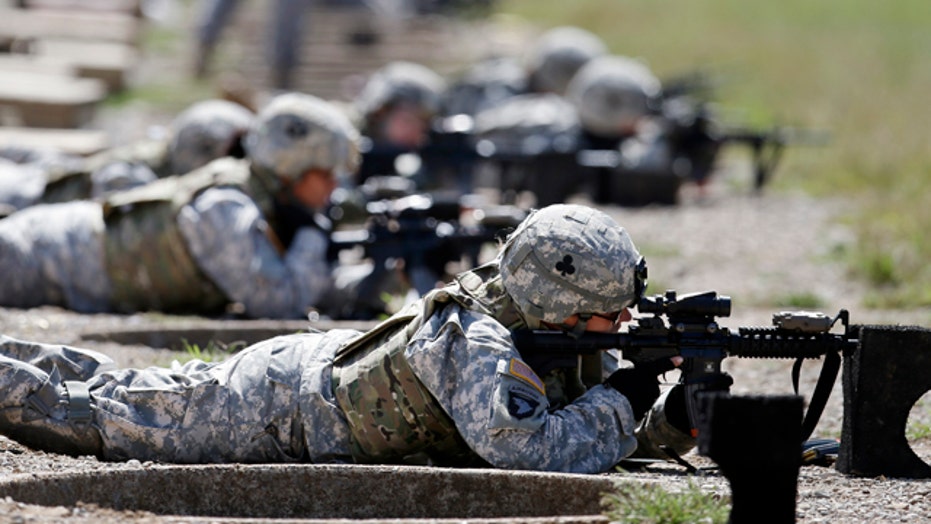 Where do women fit in modern warfare?

Pentagon to lift ban on women serving in combat

The quickly unveiled announcement that the Pentagon will lift the ban on women in combat has raised a vexing question that is already prompting debate: Will the move ultimately lead to women being required to register for the draft?

Outgoing Defense Secretary Leon Panetta announced Thursday that the Pentagon would reverse the ban and allow women to serve in combat roles.

“If they can meet the standards, there is no reason why they shouldn’t have the chance,” Panetta said during a news conference at the Pentagon.

The move was applauded by the White House, by lawmakers on both sides of the aisle and by equal-rights advocacy groups. But not everybody is on board with the changes.

Critics say the big battle ahead isn't over physical capabilities or competency but in the logistical legal challenge of trying to weave the changes into current law. How the government would handle the draft is among the questions observers are asking.

"Once you allow women into combat, you are then essentially ordering all women to fight," Tommy Sears, executive director at The Center for Military Readiness, told FoxNews.com. "You have a vocal minority forcing women who would rather not be fighting to go to war."

Sears told FoxNews.com Thursday that he believes once women are allowed on the front lines, all women will be held to the same standards as men. He claimed the government could be obligated to expand the draft -- should it ever be activated -- to women.

"There are interest groups for women who will actually make it a point to see that that happens," he said.

But Panetta, asked Thursday about the implications for the draft, said that’s not the Pentagon’s purview.

“That’s not our operation,” Panetta said during a press conference at the Pentagon. “I don’t know who the hell controls Selective Services if you want to know the truth. … Whoever does, they’re going to have to exercise some judgment based on what we just did.”

The Selective Service System is an independent federal agency within the executive branch of the federal government. The director reports directly to the president.

U.S. law states that if there are changes in policy regarding where women can serve in the military, the Pentagon must provide a "detailed analysis of the legal implication of the proposed change with respect to the constitutionality of the application of the Military Selective Service Act ... to males only."

Currently, men are supposed to register for the Selective Service within a month of turning 18. It has been limited to men between the ages of 18 and 25. Since women have not been allowed to fight on the front lines, they have been excluded from the lottery. The drafting order involves a number of steps but basically it comes down to a computer picking who gets called to duty.

Some say it's too early to worry about a draft but others point to the complicated process as another example of the uphill challenges that face the seismic shift in military policy.

If the draft were ever reinstated, changing the rules could be complicated.

The country's military normally uses volunteer troops. The president has the authority to call in reserve troops and the National Guard if necessary, but if more military personnel are needed, Congress and the president could decide to reinstate the draft.

The Pentagon on Thursday formally announced it had decided to lift the ban on women in combat.

"The department's goal in rescinding the rule is to ensure that the mission is met with the best-qualified and most capable people, regardless of gender," Panetta said in a statement.

Last year, two lawsuits were filed challenging the Pentagon's ban on women serving in combat. They added pressure on officials to overturn the male-only combat policy. The Joint Chiefs have had regular meetings on the matter and unanimously agreed to send the recommendation that would reverse the all-male policy to Panetta earlier this month. He added that he had briefed President Obama on the discussions, reviews and recommendations for nearly a year.

Another challenge facing the military is deciding and defending the position on how many of the battlefront posts would go to women versus men. It will be up to the military service chiefs to recommend and defend whether women should be excluded from any of those more demanding and deadly positions, such as Navy commandos or the Army's Delta Force.

Some combat spots may open as soon as this year, while assessments for others may take longer. The services will have until January 2016 to make a case that some positions should remain closed to women.