Trump using immigration politics to whip up his base

In an attempt to motivate the Republican base, President Trump is laying blame for the caravan on the Democrats for refusing to reform immigration laws. John Roberts reports for 'Special Report.'

Democrats appear to be remaining silent on the issue of the caravan of thousands of immigrants on the march from Central America and unwilling to get into a public debate with President Trump since the midterms are just weeks away.

Trump and his allies are urging to elect more Republicans, saying the caravan shows an immigration crisis that was exacerbated by the Democrats’ unwillingness to support tougher border measures, as proposed by Republicans and the White House.

"Every time you see a caravan, or people illegally coming, or attempting to come, into our country illegally, think of and blame the Democrats for not giving us the votes to change our pathetic immigration laws!" Trump wrote in a tweet. "Remember the midterms!"

Yet Democrats, while previously outspoken regarding Trump’s immigration policies, are staying largely silent on the issue, preferring not to engage on the topic.

The reluctance to tackle Trump on his core issue may also be influenced by the concern that just two weeks before the midterms such a fight may energize his Republican supporters with little effect on their own voters.

The Democrats’ plans to retake the U.S. Senate also involve both winning and retaining seats in the red states that overwhelmingly voted for Trump, a difficult task considering Democratic candidates are already struggling there.

In North Dakota, for instance, North Dakota Sen. Heidi Heitkamp is now trailing her Republican challenger Rep. Kevin Cramer by 16 points, according to a recent poll.

In Arizona, embattled Democratic Senate hopeful Kyrsten Sinema, who’s under fire for saying “I don’t care” if people go and fight for the Taliban in Afghanistan, is fighting for her political life against Republican Martha McSally. Sinema is now trailing McSally by two percentage points, though just last summer she was beating her opponent by as much as double digits.

“Democratic opposition to strong immigration security has been a very effective issue for us in Senate races this year,” Steven Law, head of the Senate Leadership Fund, told the Washington Post. “I don’t see how the spectacle of a massive horde trying to bust our borders on the brink of a national election remotely helps Democrats.”

"Democratic opposition to strong immigration security has been a very effective issue for us in Senate races this year. I don’t see how the spectacle of a massive horde trying to bust our borders on the brink of a national election remotely helps Democrats."

Trump on Monday doubled-down on the issue, promising that there was no limit to the number of troops he’s prepared to send to defend the border from the caravan of thousands of immigrants.

His remarks came just days after a shocking footage surfaced showing the caravan defying the warnings, smashing a border fence and entering Mexico despite the presence of the riot police.

“Sadly, it looks like Mexico’s Police and Military are unable to stop the Caravan heading to the Southern Border of the United States. Criminals and unknown Middle Easterners are mixed in. I have alerted Border Patrol and Military that this is a National Emergency. Must change laws!” Trump tweeted Monday.

The Democrats instead remain focused on tackling the GOP on issues like healthcare, believing it’s the winning issue this election cycle in the wake of the Republican plans to repeal the last remaining aspects of the Obamacare if they win the midterm election.

Senate Minority Leader Charles Schumer and House Minority Leader Nancy Pelosi, the top Democrats in the country, slammed Trump in a statement regarding the caravan of migrants, saying he’s “desperate” to change the conversation because “health care is the number one issue Americans care about.”

TRUMP ON MIGRANT CARAVAN: 'ONSLAUGHT OF ILLEGAL ALIENS' REPRESENTS 'DISGRACE' TO THE DEMS

According to a Kaiser Family Foundation survey published last week, which surveyed people since the beginning of the caravan earlier this month, the issue of immigration isn’t the top concern for voters. It ranks below health care, which has consistently been the most important issue in this election, the economy, jobs and is as important as policies concerning gun rights. 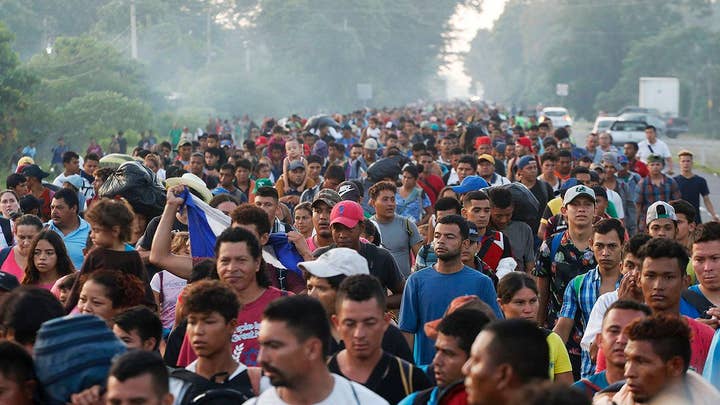 But the issue of health care is significantly less important to Republicans, who put immigration and the economy as way more important issues, suggesting the GOP efforts to highlight the caravan controversy is aimed at increasing the turnout of their base in the upcoming election.

The strategy might be working as Republican-affiliated early voters are surpassing Democratic-affiliated ones in early voting in several states with key elections, according to the Hill.