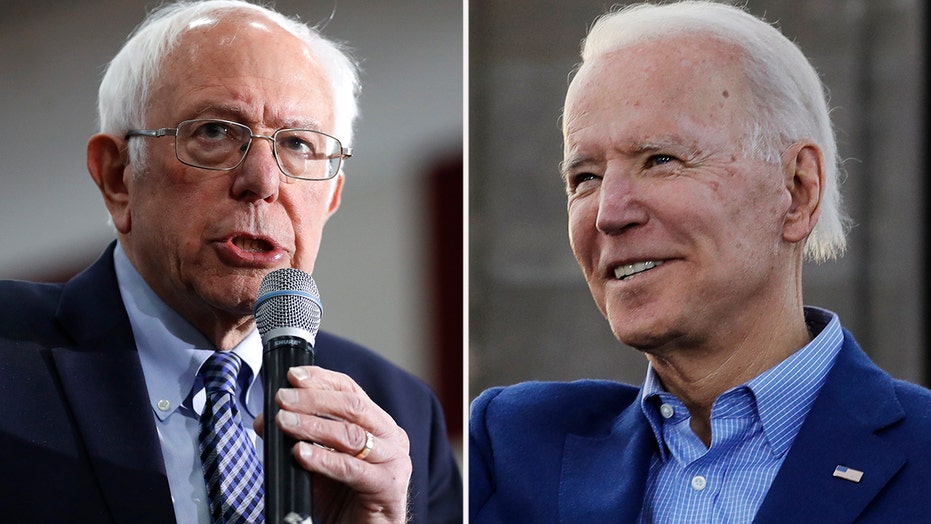 Sen. Cory Booker was back on the presidential campaign trail on Monday – not stumping for himself – but instead speaking out on behalf of onetime rival Joe Biden.

The New Jersey Democrat, who clashed at times with the former vice president on the primetime presidential nomination debate stage, called Biden a “statesman” as he introduced him at a campaign event in Flint, Mich., on the eve of that state’s crucial March 10 primary.

“It should be obvious. My whole campaign for president of the United States was about the idea that we need to bring this country together,” Booker emphasized.

“We have the potential to have a Joe Biden, who is truly the one that’s calling us to stand together, not fall apart,” Booker added as he stressed that the former vice president could be the healer and bridge builder for a “wounded nation.”

Booker’s endorsement of Biden came one day after Sen. Kamala Harris of California -- another onetime White House contender who traded fire with Biden on the debate stage – also backed the former vice president. She was scheduled to join Biden and Booker at a campaign event Monday evening in Detroit.

WHAT BOOKER AND HARRIS ONCE SAID ABOUT BIDEN

The endorsements from Harris and Booker follow other former rivals who’ve supported the former vice president over the past nine days. The endorsements have flowed since he won the South Carolina primary in a landslide over the front-runner for the Democratic nomination at the time: Sen. Bernie Sanders of Vermont. The pace was accelerated last week after Biden swept 10 of the 14 states holding primaries on Super Tuesday and took the lead over Sanders in the all-important race for Democratic nomination convention delegates.

The former vice president also enjoyed a tidal wave of endorsements from current and former members of Congress and governors as the party establishment all coalesced around Biden to prevent Sanders – a populist senator and self-described democratic socialist – from becoming the party’s standard-bearer in November’s general election.

Two polls released on the eve Michigan’s primary showed Biden with large double digit leads over Sanders in Tuesday’s primary. The former vice president topped Sanders 51 percent to 36 percent among likely Democratic presidential primary voters in Michigan in a Monmouth University survey. And he was ahead of Sanders by a whopping two-dozen percentage points in a second live telephone operator survey – by EPIC MRA for the Detroit Free Press.

But the pre-Michigan primary polls four years ago got it all wrong – they showed Clinton with a double-digit lead over Sanders.

Biden -- very cognizant of the polling debacle in 2016 – stressed on Monday that “I’m kind of superstitious, I see all these polls. ... I remember Hillary was up by 23 points ... I don’t take anything for granted.”

Sanders was the front-runner for the Democratic nomination after winning the Feb. 11 New Hampshire primary and then shellacking the field a week and a half later at the Nevada caucuses. But two new national polls released on Monday indicate that Biden is once again the clear front-runner for the nomination – thanks to his impressive victories in South Carolina and on Super Tuesday.

A new national survey by SSRS for CNN released Monday indicated Biden with 52 percent support among Democrats and Democratic-leaning independents, and Sanders at 36 percent. Sen. Elizabeth Warren of Massachusetts – who dropped out of the race last Thursday while the poll was being conducted – stood at 7 percent. And Biden topped Sanders 54-35 percent in a new national survey from Quinnipiac University.

Sanders – hoping for a revival in the March 10 contests -- headlined a Fox News Town Hall at 6:30 p.m. ET in Detroit. Earlier, campaigning in Saint Louis ahead of the Missouri primary, the senator urged younger voters to cast ballots.

“I hope all the old people vote, that’s great, but I want young people to be voting at the same rates!” Sanders urged.

And he touted, “Our campaign is the campaign that can bring millions of young people to the polls.”

Everytown for Gun Safety – praising Biden’s record on combating gun violence -- said on Monday that “Vice President Joe Biden is unquestionably the candidate in the race who has spent a lifetime fighting to protect Americans from gun violence while repeatedly taking on the NRA and winning.”

Biden has spotlighted his record in taking on the NRA as he’s painted contrasts with Sanders.

Everytown – which was co-founded by former New York City Mayor Mike Bloomberg – pledged to spend $60 million this election cycle to boost “gun sense” candidates up and down the ballot.

Separately, Bloomberg on Monday contributed an additional $2 million to help register half a million African-American voters ahead of the general election.