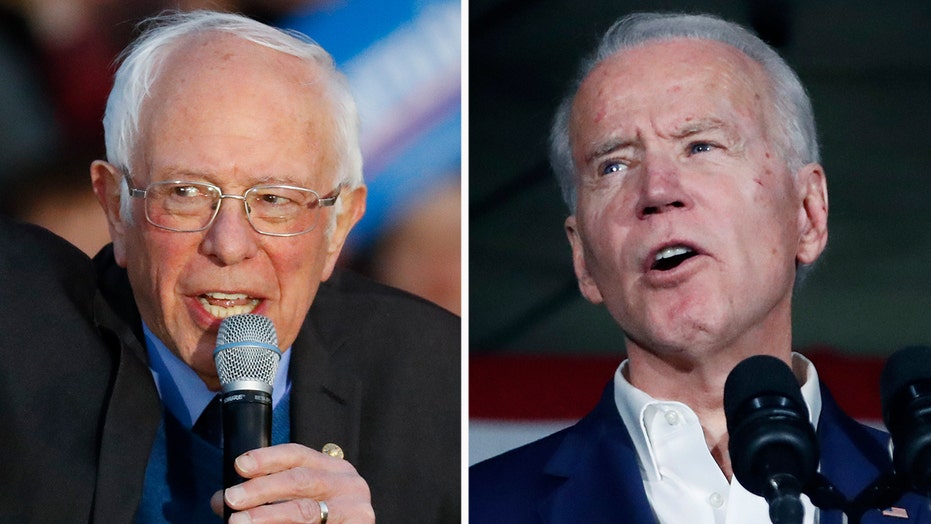 Election battle ramps up between Bernie, Biden ahead of ‘mini’ Super Tuesday

What a difference a couple of weeks makes.

A new national poll indicates that a majority of Democratic presidential primary voters want to see Joe Biden as their party’s nominee, with the former vice president holding a double-digit lead over rival Sen. Bernie Sanders of Vermont.

That’s a dramatic shift from late last month, when Sanders, an independent, enjoyed the lead over Biden in national polling in the race for the Democratic presidential nomination.

THE LATEST REPORTING FROM FOX NEWS IN THE 2020 PRESIDENTIAL CAMPAIGN

The new survey, by SSRS for CNN, indicates Biden with 52 percent support among Democrats and Democratic-leaning independents, and Sanders at 36 percent. Sen. Elizabeth Warren of Massachusetts – who dropped out of the race last Thursday while the poll was being conducted – stood at 7 percent.

Sanders – the populist senator making his second straight White House bid – claimed the national polling lead from Biden last month, after winning the New Hampshire primary and clocking the rest of the field in the Nevada caucuses.

But thanks to Biden’s landslide victory in the South Carolina primary at the end of February and his extremely strong performance on Super Tuesday last week – winning in 10 of the 14 states holding contests – Biden has surged in national polling.

Biden’s victories also seem to have boosted his favorable rating, which now stands at 48 percent, up 9 percentage points from December. The unfavorable rating for Sanders, a self-described democratic socialist, jumped from 44 percent in December to 52 percent now, according to the CNN survey.

The poll suggests Biden holding a nearly 20-point lead among white voters and a 10-point advantage among non-white voters, as Sanders’ strength with Latino voters seems to take a bit out of Biden’s edge with African Americans.

The survey shows a clear generational divide, with Biden up by 55 points among voters 45 and older, and Sanders ahead by 27 points among those under 45. Self-described liberal voters support Sanders over Biden 52 percent to 36 percent, while those who say they’re moderate or conservative support Biden 65 percent to 24 percent over Sanders.

While there’s been plenty of friction between the two candidates and some of their supporters, nearly nine in 10 questioned said they would back the ultimate nominee regardless of whom they backed in the primaries.

The CNN poll was conducted by SSRS March 4-7, with 540 Democrats or Democratic-leaning independents questioned by live telephone operators. The survey’s sampling error is plus or minus 5 percentage points.