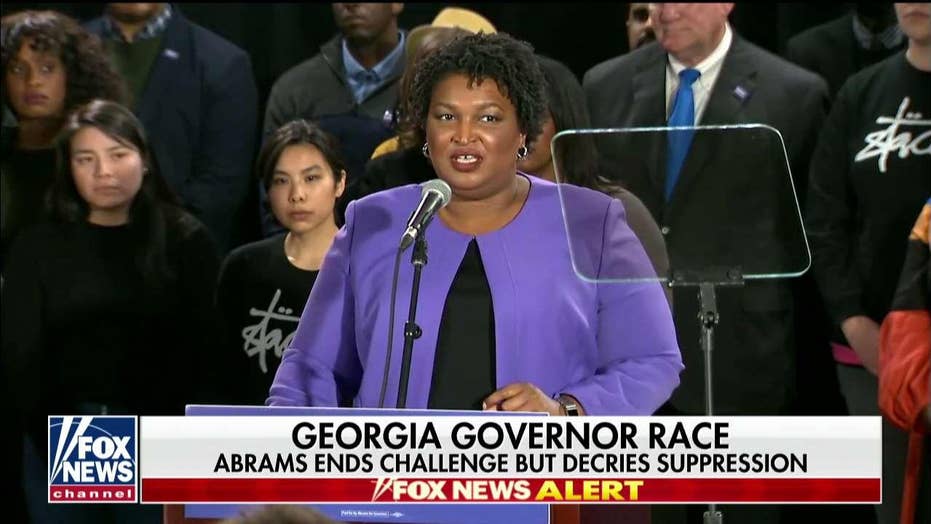 Defeated Democratic Georgia gubernatorial candidate Stacy Abrams, who admitted last week that she could not beat Republican Brian Kemp, on Sunday refused to call Kemp the legitimate governor-elect and said democracy had "failed" in the state.

"But we know sometimes the law does not do what it should, and something being legal does not make it right," Abrams told Tapper. "What you are looking for me to say is that there was no compromise of our democracy and that there should be some political compromise in the language that I use. And that's not right. ... Will I say that this election was not tainted, was not a disinvestment and a disenfranchisement of thousands of voters? I will not say that."

Abrams maintained that "it began eight years ago with the systematic disenfranchisement of more than a million voters and continued with the underfunding and disinvestment in polling places and training and in the management of the county delivery of services, and I think it had its pinnacle in this race."

Tapper pointed out that while 1.5 million voters were removed from Georgia's voter rolls from 2012 to 2016 if they did not vote for three years, many other states -- as well as heavily liberal Washington, D.C. -- also strike inactive voters from the rolls as a matter of course.

"Maintaining clean voter rolls is absolutely appropriate," Abrams acknowledged. She then criticized the "vigor with which [Kemp] did so -- and the mismanagement with which he did so." She cited the unverified case of 92-year-old Christine Jordan, who was reportedly denied at the polls despite voting regularly.

With 100 percent of precincts tallied, Georgia's official election website showed Kemp had won 50.22% of total votes cast, or 1,978,408 votes. Abrams, by comparison, had 48.83 percent, or 1,923,685 -- meaning Kemp leads by approximately 55,000 votes. A runoff would have automatically triggered if neither candidate had won 50 percent of the vote.

Abrams insisted her complaints were based on "facts," and pointed specifically to "four different federal judges in the course of a week" who "forced better behavior" among Georgia election officials prior to the midterms.

In one instance, shortly before Election Day, a federal judge appointed by former President Barack Obama, U.S. District Judge Eleanor Ross, ruled that the state's "exact match" law as a potential source of disenfranchisement and ordered the state to change its protocols.

Kemp had touted the law, which flags discrepancies between voter registrations and official identification documents. If there are any differences -- such as a missing hyphen -- voters had to clear the matter up with a state official before voting.

But those restrictions were estimated to affect only approximately 3,000 voters -- far short of the 55,000-vote margin that Kemp obtained on his way to victory.

Abrams also pointed to Kemp's decision to initiate a hacking investigation into the Georgia Democratic Party with just hours to go before Election Day.