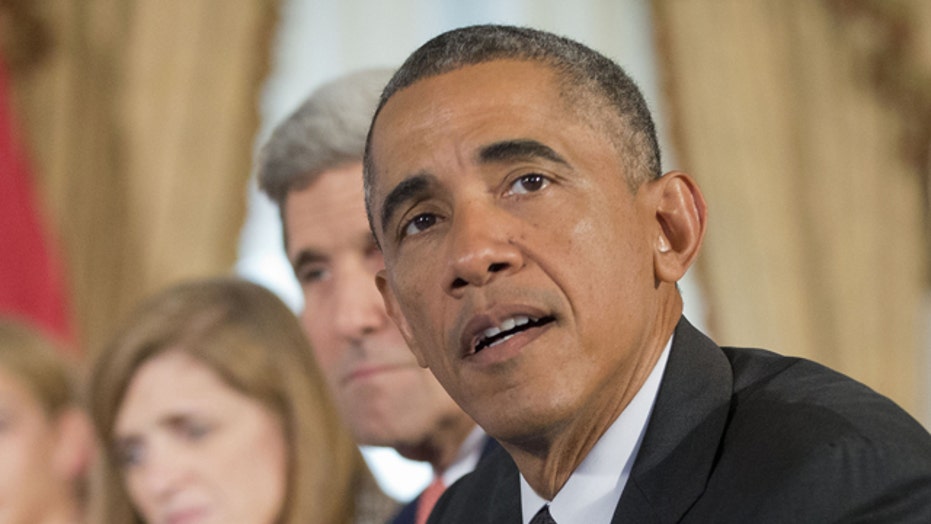 Are liberals giving President Obama a pass for waging the kind of war they would instinctively oppose?

In other words, are they opposed to bombing only when the missions are ordered by Republicans?

There is anecdotal evidence, at least, that some on the left have lost their antiwar passion now that George W. Bush has decamped to Texas. Which means they’re more about partisanship than principle.

Dana Milbank, the liberal Washington Post columnist who can be tough on liberals, was at the White House for an antiwar demonstration in the wake of Obama’s airstrikes against ISIS in Syria. A grand total of 22 people showed up.

Here’s what he quoted lefty activist David Swanson as saying:

“If George W. Bush were launching wars with Congress out of town, oh, it would be flooded. They would be screaming.”

Obama, said Swanson, “can get away with some abuses and worse and be forgiven because he engages in wars more eloquently and reluctantly, but the people who die in the wars are just as dead and the people who suffer from the sabotaging of climate agreements have their climate just as destroyed.”

Defanged. Wow, those are damning words.

Andrew Sullivan, a conservative who largely became an Obama booster, is equally incredulous:

“The way in which Obama supporters have lamely acquiesced to this reckless war fomented by a dangerous executive power-grab is more than a little depressing. It strikes me as uncomfortably close to pure partisanship. I can’t imagine them downplaying the folly of this if a Republican president were in charge.”

Now of course a president’s strongest partisans will give him the benefit of the doubt when it comes to controversial policies. And of course they will be quicker to jump on a president of the opposing party. But war, and peace, would seem to be one of those issues that would trump ideological allegiances.

Rand Paul hurled this charge in a Senate speech last week during a debate over funding for the Syrian rebels:

“When there were Republicans in office, there were loud voices on the other side. I see an empty chamber. There will be no voices against war because this is a Democrat president’s war…The hypocrisy of that should resound in this nearly empty chamber.”

Keep in mind, though, that the two situations are not directly comparable. Iraq was a war of choice, sold by the Bush-Cheney administration on grounds that Saddam posed a threat to America. Obama’s military campaign against the ISIS terrorists, while also a political choice, followed an uproar over videos depicting the beheading of two American journalists.

Still, some liberals are consistent, especially on war issues. On “The View,” Rosie O’Donnell compares Obama striking ISIS to Bush’s invasion of Iraq:

“It’s scary to me to think that when I had my last baby 12 years ago we were just getting into war and she was 1 and now I have another 1-year-old and we’ve just bombed another country,” she said. “And even though it doesn’t say so on the news, we went to war yesterday in America against another country in the Mideast. And to me, no matter what, that’s wrong. Because you don’t fight violence with violence.”

That is unadulterated pacifism—should we not have fought violence with violence during World War II?—but Rosie isn’t cutting Obama any slack.

Which brings me to a striking column by Jedediah Bila, co-host of Fox’s “Outnumbered” and a frequent critic of Obama. She says that during the Bush years her liberal friends were “waiting to have a knee-jerk reaction to everything he said and did. And I mean everything.

“The man couldn't mention the weather without someone insisting he was alluding to the insignificance of climate change. If he made a silly joke that fell flat, they would leap to a discussion about how he was disrespecting the office of the presidency…

“They looked absolutely ridiculous and dishonest. And yes, some do the exact same thing now when it comes to Obama.

The other day, Obama gave a brief statement on our involvement in Syria and Iraq. I found it to be a solid, concise statement in which he kept his cards close to his chest, exuded confidence, and said what needed to be said. I expressed that on Twitter. Many didn't like that I gave our president some credit. Some may have preferred that I wait with bated breath to find something, somewhere, I could somehow disagree with. Some do that for a living, I know. The thing is, that's not why I'm here.

“I'm not here for retweets or to play the 'us versus them' game. I'm here to tell you the truth, what I actually think, and to evaluate this President and other leaders with an honest mind. Otherwise, what's the point of this whole thing?”

Indeed, what is the point? Pundits are entitled to root for their side and disparage the other side. But every single day on every single issue? Isn’t that predictably boring?

I thought of that during the flap over Obama saluting with a coffee cup in his hand as he walked off Marine One.  It was an awkward mistake, no doubt, but did it warrant all the hyperventilating over the commander in chief disrespecting the military? Well, I guess there’s been a hyperventilation deficit since Obama talked about the war on Martha’s Vineyard while wearing a tan suit.