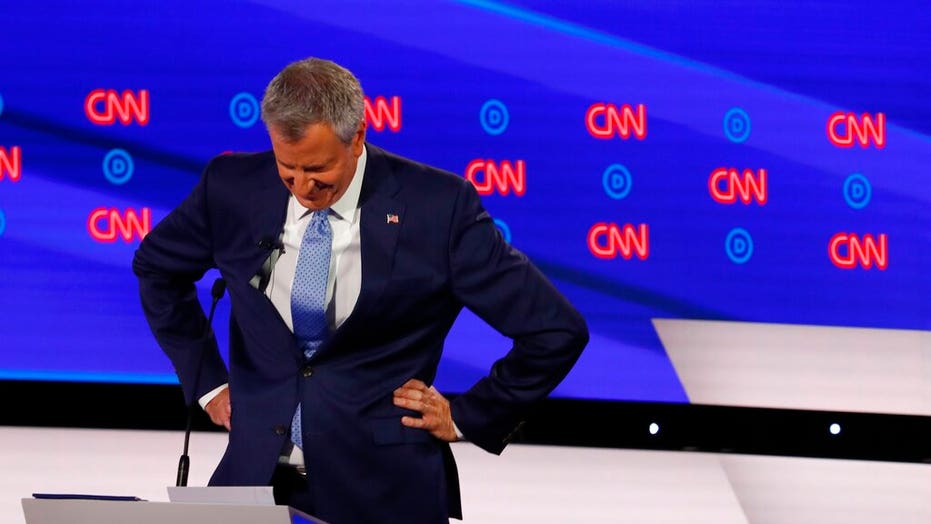 New York City Mayor Bill de Blasio faced fury from his fellow passengers Thursday after they were prevented from deplaning so the mayor and his security detail could rush to a taping of ABC’s “The View.”

De Blasio took a commercial flight to New York from Detroit hours after taking the stage in Wednesday's Democratic debate.

After Delta Flight 788 landed at La Guardia Airport, a flight attendant got on the intercom and told de Blasio's fellow passengers that they would have to stay seated for a little longer so passengers in the back of the plane -- where the mayor's staff and security were seated -- could leave first, according to The New York Post. The paper, which had a reporter on the same plane, added that after the mayor's party left the plane, the attendant came back on the intercom and said passengers could leave their seats, an announcement that was greeted by a sarcastic chorus of "Thank you!"

MEGHAN MCCAIN BLASTS DE BLASIO DURING DEBATE: 'EVERYONE HATES YOU'

De Blasio's campaign press secretary Jaclyn Rothenberg told Fox News that de Blasio's security detail "asked the flight attendant if one of the detail members could head upfront as soon as we stopped to get in front of the protectee [de Blasio]."

"The flight attendant made that announcement on his own thinking he was helping," Rothenberg said. "We did not ask him to do that."

Rothenberg also tweeted about the incident Thursday after a photograph snapped by the Post reporter pictured her waving at the camera.

"As the woman waving to a reporter (who I know) & who wrote the story on a plane filled with other media, this isn’t true. The mayor sat in row 13 and got off the plane in order. It’s true that security in the last row got off first along with elderly and handicapped," she said.

Despite De Blasio's apparent eagerness to get on "The View," several of the daytime show's cohosts slammed him on Twitter during parts of the debate.

Meghan McCain, blasted de Blasio during his opening statements, touting her support for former Vice President Joe Biden saying "Uncle Joe came to play! Everyone hates you DeBlasio. You left us in the cold in the blackout," she tweeted.

McCain followed up with another fiery tweet later on saying "Oh for gods [sic[ sake - everyone hates you DeBlasio."

Her fellow co-host, Abby Huntsman also tweeted during the debate saying "Pretty sickening to listen to de blasio’s opening statement about crime when two nights ago someone I know was mugged and robbed right in midtown full of people. One of many sad examples recently. The city he represents."

One female passenger told the Post Thursday's plane incident was "just a continuation of the rudeness and the bluntness of his [debate] performance last night," while another passenger said it was "par for the course."