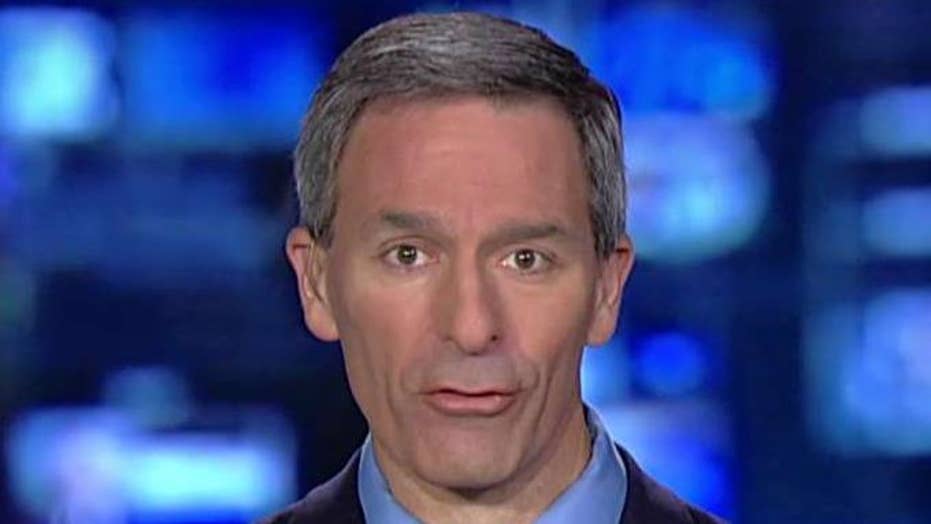 In a lengthy statement to Fox News, Cuccinelli recalled Wednesday night’s incident, which took place at The Dubliner — an Irish pub on Capitol Hill where he and O’Malley were attending an event with fellow graduates of Gonzaga College High School before O’Malley’s “shame-invoking tirade” forced Cuccinelli to leave.

CUCCINELLI FORCED TO LEAVE BAR AFTER BEING ASSAILED BY MARTIN O'MALLEY

“I arrived at The Dubliner to meet with some of my Gonzaga classmates last night, Cuccinelli said in the statement. “As I walked up to one of the bars among several in The Dubliner to order my Guinness, I heard screaming and cussing behind me to my left, which I did not immediately take notice of other than the fact that it was louder than everything else in the pub.”

Cuccinelli continued: “When I turned to look I saw O'Malley and he was obviously screaming at me. For a moment I thought he was trying to be funny, as we've met before, which I thought was strange. It was immediately clear that he was cursing and screaming for real, to the point of veins bulging on his neck.”

Cuccinelli added that O’Malley had “also inspired one or two of his (apparent) buddies to join in the cussing assault,” which the Trump official said he attempted to ignore. Cuccinelli said he proceeded to attempt to order at a different bar within The Dubliner, but that O’Malley followed him.

“[A]t which point O'Malley pushed his way through the small group to confront me face to face, still cursing me, the President, and my Italian ancestry and he got right up in my face, bumped up against me and invited me to take a swing at him,” Cuccinelli recalled, adding, “at which point I said ‘Martin, one of us has to rise above this, and it's obviously not going to be you.’”

Cuccinelli noted that some of O’Malley’s comments about Trump's immigration policy were “odd” due to the fact that “they applied to President Obama's policies, a fact he clearly did not appreciate me pointing out (without screaming it, btw).”

Cuccinelli said, on a “positive” note, he saw a friend, who happens to be a Democrat, and, in what he said appeared to be “an attempt at de-escalation,” that friend approached the two and “forced some friendly conversation in between Martin and I.”

Cuccinelli said he engaged in a short conversation and walked away to a separate area of the bar to see several other Gonzaga graduates and “high school buddies who happened to be there.”

Meanwhile, after the incident O’Malley defended his actions to The Washington Post, which first reported on it, noting that he and other graduates were blasting Cuccinelli due to the former Trump administration immigration policy that separated families at the southern border.

“We all let him know how we felt about him putting refugee immigrant kids in cages — certainly not what we were taught by the Jesuits at Gonzaga,” O’Malley said in a text to the Post, adding that Cuccinelli is “the son of immigrant grandparents who cages children for a fascist president.”

A patron of the bar, Siobhan Arnold, who's identified as a Villanova University media relations associate, tweeted late Wednesday describing the incident.

Cuccinelli has been known as one of the Trump administration's most vocal immigration hardliners. He was appointed acting deputy DHS secretary earlier this month under new acting Secretary Chad Wolf, after serving as acting U.S. Citizenship and Immigration Services director. Cuccinelli, along with acting Customs and Border Protection Commissioner Mark Morgan, has been one of the favorites among immigration hawks to lead the department.

Cuccinelli is not the first administration official to be harassed for his work involving enforcement of President Trump’s immigration policies.

Former Homeland Security Secretary Kirstjen Nielsen was repeatedly heckled for her role in the administration, and was forced, last year, to cut a working dinner short at a Mexican restaurant in Washington after protesters harassed her, shouting “shame!”  Former White House Press Secretary Sarah Sanders was also forced to leave a Virginia restaurant during the same time period. Those incidents took place after Trump signed an executive order to stop the administration’s controversial family separation policy.

Initial images of cages with children inside that spread on social media last year indeed were from the Obama administration. The photos, taken in 2014 by the Associated Press, were wrongly described as illustrating imprisonment under the Trump administration.