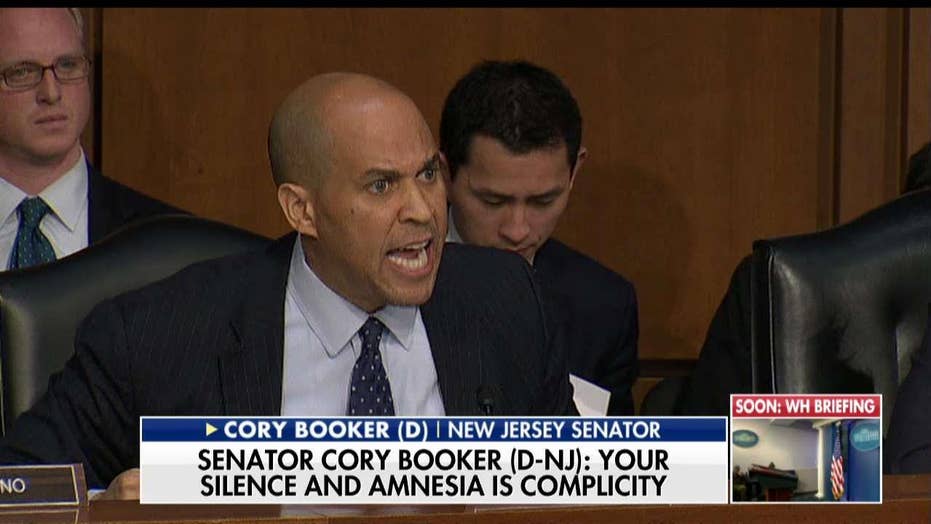 Republicans are slamming Democratic Sen. Cory Booker for “mansplaining” to Department of Homeland Security Secretary Kirstjen Nielsen in a sharp and one-sided exchange Wednesday before a Senate committee.

The New Jersey lawmaker blasted Nielsen's "silence and amnesia" after failing to get the response he sought on her recollection of statements President Trump made in a meeting last week. Booker's hostile tone prompted Republican National Committee Rapid Response Director Michael Ahrens to invoke the millennial term for males talking down to women.

“Picture it," Ahrens said in a news release. "A male Republican senator spends his entire 10 minutes ‘mansplaining’ the female DHS secretary about immigration policy, throws around the term ‘conscientious stupidity,’ yells at her the only time she tries to speak, and concludes his diatribe without even asking her to respond.”

During the Senate Judiciary Committee hearing Wednesday, Nielsen said she did not recall the president describing some African and Latin American nations as “s***hole” countries.

Booker was not satisfied.

“The commander-in-chief, in an Oval Office meeting, referred to people from African countries and Haitians with the most vile and vulgar language,” Booker said, raising his voice at Nielsen. “Your silence and amnesia is complicity.”

He added that Trump’s language proves that “ignorance and bigotry aligned with power is a dangerous force in our country.”

Booker also quoted Martin Luther King Jr., saying that “nothing in all the world is more dangerous than sincere ignorance and conscientious stupidity.”

Homeland Security Secretary Kirstjen Nielsen says she remembers 'a lot of rough talk' and 'general profanity' during immigration meeting at the White House with President Trump and members of the Senate.

The RNC, though, slammed “Derogatory Cory,” and suggested that because Booker is a Democrat, he was not being criticized for how he spoke to a woman.

“Because the party affiliations were reversed, Derogatory Cory got nothing but praise from the selectively-outraged base he was clearly performing for yesterday,” Ahrens said.

Booker’s office did not immediately respond to Fox News’ request for comment.