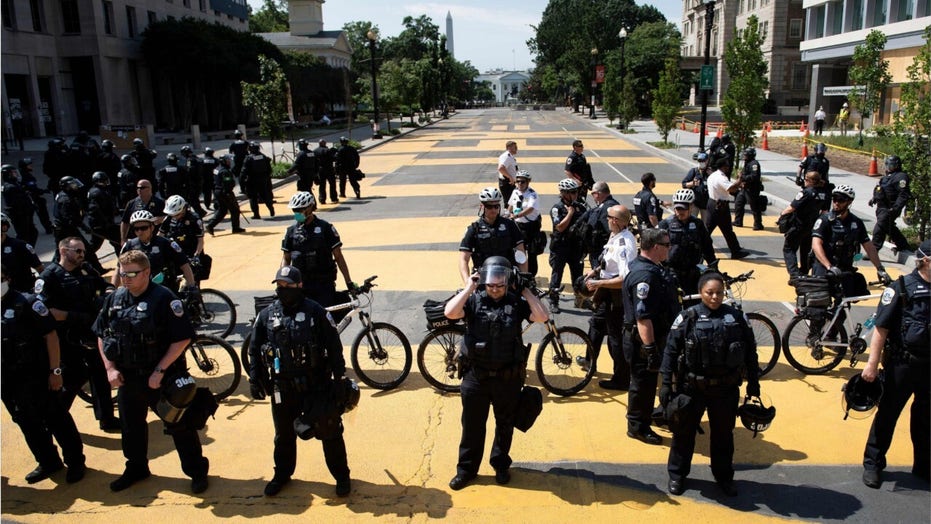 Officers clear protesters from outside the White House

Officers cleared protesters from outside of the White House as they tried to declare a new autonomous space in Washington D.C.

Conservatives on social media noted the irony in someone asking “Where are the police when you need them?” after a person tried to attack the crew of NBC reporter Andrea Mitchell Tuesday afternoon in an area of Washington, D.C. that Black Lives Matter protesters dubbed the “Black House Autonomous Zone."

The Washington, D.C. protesters had attempted this week to create a police-free zone near the White House similar to Seattle’s autonomous zone that took over six blocks near downtown after police abandoned a precinct, but were unsuccessful.

The would-be attacker, dressed in a pink bra and panties, ran at Mitchell and House of Representatives Delegate Eleanor Holmes Norton as they stood in the street with a cameraperson, but was quickly moved away by security.

Mitchell wasn’t on air at the time, but the incident was recorded.

Afterward, a person – some have claimed it was Mitchell, while others say it was Norton, – asks, “Where are the police when you need them?”  Mitchell is then seen pointing several blocks away and saying there are 'a million" police officers over there.

On social media, critics jabbed at Norton, a liberal politician who has been critical of the police, as well as Mitchell, who is also widely viewed as liberal.

"Someone should remind her that her party wants to abolish the police and give her the name of a good social worker," Trump campaign senior adviser Katrina Pierson wrote on Twitter.

"While standing in the 'Black House Autonomous Zone' NBC reporter @mitchellreports was almost just attacked. Her first reaction was to ask where the police were," Caleb Hull wrote.

"NBC News host Andrea Mitchell was nearly attacked by a crazy [person] today on camera. Her response to the incident was 'Where are the police when you need them.' You can hear her say this," another user tweeted. "Ironically she was literally standing on a street painting that read 'Defund the police.'"

A WUSA-TV reporter, however, reported that police did in fact arrive and deescalated the incident.