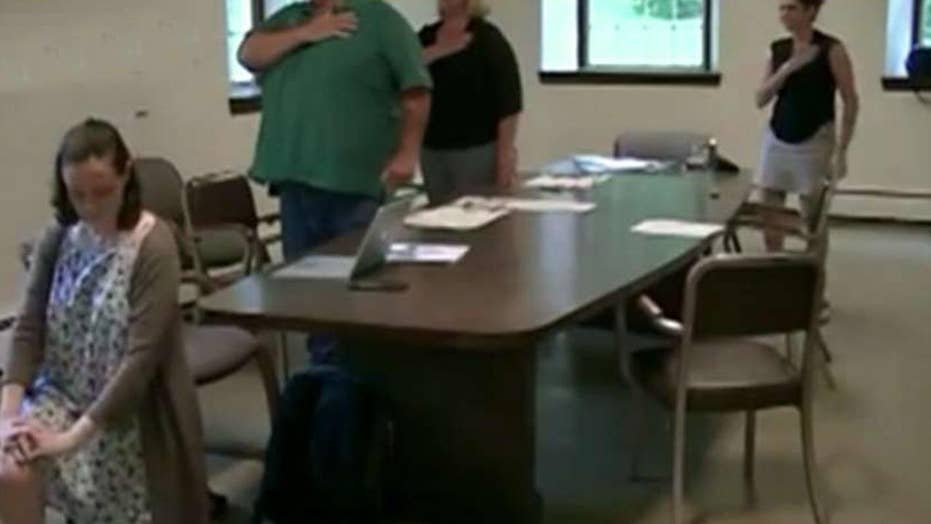 A local Democratic lawmaker in Connecticut is under fire after she took a knee during the Pledge of Allegiance in protest of President Trump.

Haddam, Conn., Selectwoman Melissa Schlag knelt during the Pledge of Allegiance during a Board of Selectmen meeting on July 16. The protest was in response to Trump’s comments after his summit with Russian President Vladimir Putin in Helsinki, Finland.

“I felt nervous when I did it but I also felt powerful,” Schlag told the Hartford Courant. “If I don’t speak up, those who can’t won’t be heard.”

Schlag’s protest has drawn considerable backlash in the small town, with some saying she was disrespectful to the flag.

“The Pledge of Allegiance doesn’t have anything to do with the flag, in my opinion,” Schlag told FOX61. “I believe in our country. I love our flag and the United States of America.”

“She needs to resign immediately,” Herbst said on “Fox & Friends” Wednesday. “One of the things the flag stands for—it stands for our freedom, it stands for our democracy. It stands for the fundamental ideal that we can have differences of opinion, but we all stand in respect of our flag because many people, including my 93-year-old grandfather who’s a veteran, fought in defense of the very liberty that the flag resembles.”

Herbst added that Schlag’s actions were “reflective” of the last eight years in the state under Democratic Gov. Dannel Malloy’s administration. Herbst accused Democrats of having a “complete lack of respect” for the country.

Trump faced bipartisan criticism over his summit and press conference with Putin last week, where Trump initially seemed to accept the Russian leader's denial of meddling in the 2016 American election. Trump later claimed he misspoke and said he accepts the U.S. intelligence community's conclusion that Russia interfered in the election.

Schlag’s protest, adopting the practice of NFL players protesting police violence, was not her first flag controversy. From 2013 to 2015, when Schlag served as first selectwoman, she had both the United States and Connecticut flags removed from her office.

“Both flags were taken down because I rearranged the furniture and I put a bookcase where the flags were,” Schlag explained to FOX61.

Schlag, who supported Sen. Bernie Sanders, I-Vt., during the 2016 presidential election, told the Hartford Courant that she received a strong response from her constituents this week—some in support, and some against her decision to kneel.

“I didn’t kneel because I hated my country,” Schlag told the Courant. “I knelt because I love my country.”

Schlag did not respond to Fox News’ request for comment.