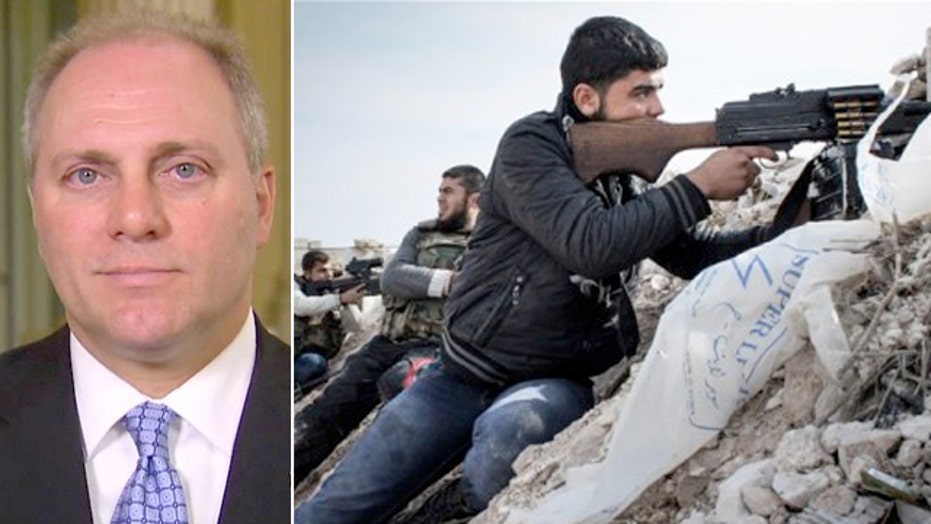 WASHINGTON – The Senate gave final approval on Thursday to President Obama’s plan to train and arm Syrian rebels, endorsing a key plank of the president's strategy for taking on the Islamic State.

The Senate, in a 78-22 vote, authorized the mission as part of a must-pass, stopgap spending bill to keep government agencies operating into December.

The House passed a similar measure on Wednesday 273-156, with Republicans backing the president’s measure by more than a 2-1 margin.

Speaking at the White House immediately after the vote, President Obama said he wanted to thank congressional leaders for the "speed and seriousness" with which they approached the issue and praised the "strong bi-partisan support in Congress for the new training effort."

Obama also said France would join in airstrikes against Islamic State targets and again emphasized that "American forces that have been deployed to Iraq do not and will not have a combat mission."

The leaders of both parties stood with Obama despite questions they had about his plan to arm moderate rebel groups and warnings that the plan could backfire or not be strong enough to make much of a difference as Islamic States forces try to advance in the country.

Obama has pledged airstrikes as well but is adamant that he won't send U.S. combat troops to battle the Islamic extremists in either Iraq or Syria.

"We must pursue a comprehensive and sustained counterterrorism strategy, and a bipartisan coalition in the House voted to support a critical component of that strategy," Obama said after the House vote.

The measure is the last major business on Capitol Hill before lawmakers return to their districts and states to campaign for re-election.

The new authority is part of $500 million that Obama requested in May to train and equip Syrian rebels. The cost, to be covered by leftover war funding from this year, generated virtually no debate among lawmakers, who focused instead on the possible consequences of a new military mission not long after a war-exhausted nation largely pulled out of Afghanistan and Iraq.

Testifying before the House Armed Services Committee, Hagel said the military had presented a detailed Syrian plan to Obama on Wednesday during the president's visit to Central Command and was awaiting his sign-off.

"The president has not yet approved its finality," Hagel said.

At a House Foreign Affairs Committee hearing, Kerry sought to push back on an argument by some in Congress that Syria's rebels lack moderates, or at least any with the capacity to make a difference in the war. He spoke about several opposition groups, each including up to 4,000 fighters, that have battled Islamic State militants and other extremists over the past year.

Kerry said the coalition that will fight the Islamic State counts 50 countries. He said countries in Europe, the Arab world and elsewhere had committed to taking part militarily, without specifying any by name. He said a couple of countries "are already flying with us" in missions.

Despite their doubts, top Republicans saw little choice but to back the president. The measure provides Obama the authority to train and arm rebels through Dec. 11, ensuring the issue is debated at greater length in a postelection lame duck session.

"While I'm concerned about the ability of the coalition to generate sufficient combat power to defeat ISIL within Syria, I do support the president's proposal to begin the program," Senate GOP leader Mitch McConnell of Kentucky said Thursday.

Democrats proved to be a harder sell, backing Obama 114-85 in the House.

"We simply don't know if somewhere down the line it will turn our guns back against us," said Rep. Loretta Sanchez, D-Calif., giving voice to a fear that rebels seeking the removal of Syrian President Bashar Assad would prove unreliable allies eventually.

As the House voted, Rep. James Lankford, R-Okla., a nearly sure bet to win an open Senate seat, sent out a fundraising appeal focusing on the Islamic State group threat and criticizing the president. "While our `commander' in chief is playing golf and taking ambiguous stances on this great threat we need, now more than ever, strong leaders in the Senate willing to take the fight to ISIS' front door instead of waiting passively for them to come to us," Lankford wrote.

In the Senate, backing from the top Democratic and Republican leaders ensures swift passage, even as some in the rank and file were lining up against the effort.

"I have seen no evidence that the Syrian rebels we plan to train and arm will remain committed to American goals or interests," Sen. Joe Manchin, D-W.Va., said. "Further, the opposition fighters that we will train care more about overthrowing Assad than they do about defeating ISIS. Assad is evil, but he is not a threat to America."

The underlying spending bill prevents a partial government shutdown at month's end and also renews the charter of the Export-Import Bank, which helps finance purchases of U.S. exports. That postpones until June a battle between tea party forces opposing the bank and business-oriented Republicans who support it.

The legislation also includes $88 million to combat the Ebola outbreak in West Africa.