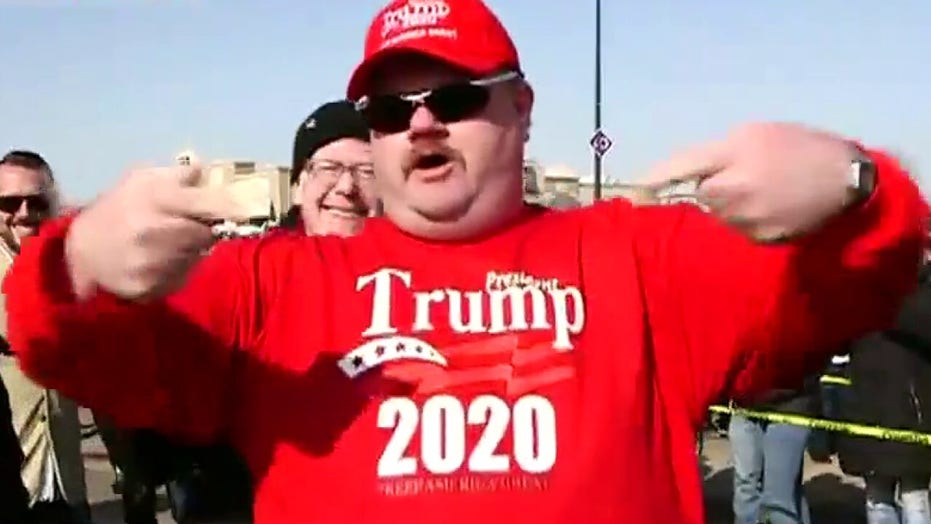 Some 200 protesters from across the state had gathered at the site, with some blocking traffic nearby just as Trump took the stage, FOX 21 of Colorado Springs reported.

Joining the president inside the packed venue was U.S. Sen. Cory Gardner, R-Colo., one of just two Senate Republicans up for reelection this year. (Sen. Susan Collins of Maine is the other.)

Members of the Colorado Springs Public Order Response Team addressed the protesters, who were obstructing traffic, and issued several warnings before police engaged with them and made the arrests on failure to desist or disperse charges, FOX 21's Daniela Leon reported.

“The crowd disregarded the orders, and a number of people were taken into custody,” the Denver Post reported, citing a police statement.

The eight suspects were handcuffed and taken to the El Paso County jail, where they were cited and released, the newspaper reported.

Protesters are led out of the World Ice Arena as President Trump speaks at a campaign rally Thursday, Feb. 20, 2020, in Colorado Springs, Colo. (Associated Press)

Meanwhile, FOX 21 crews inside the World Arena said they saw at least one person removed several hours before the rally began.

In addition, as Trump spoke, a handful of protesters were removed from the rally, after they began chanting, “Lock him up!”