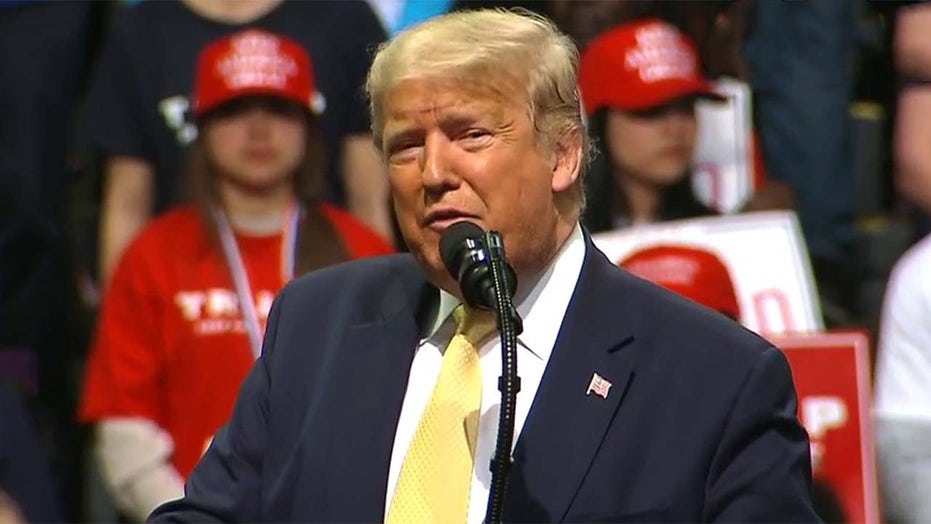 President Trump continued his four-state trip out west Thursday evening with a wild rally in Colorado Springs, Colo., as he openly celebrated Democrats' intra-party squabbling at the Las Vegas presidential primary debate -- and took an unexpected shot at the movie "Parasite," prompting a scathing response from its U.S.-based distributor.

In the wide-ranging event that resembled a casual conversation at points, Trump also assessed that "Mini Mike" Bloomberg "didn't do well last night" and declared Amy Klobuchar's presidential campaign dead because she dejectedly asked Pete Buttigieg at the debate if he was calling her "dumb."

Trump again called Buttigieg "Alfred E. Neuman," after the scrawny fictional character, and advised Klobuchar, "You don’t say that even if it's true!"

Trump then mocked the Oscars at length, saying he couldn't believe a foreign film like "Parasite" won Best Picture.

"By the way, how bad were the Academy Awards this year? 'And the winner is a movie from South Korea,'" Trump said. "What the hell was that all about? We've got enough problems with South Korea with trade. On top of that, they give them the best movie of the year? Was it good? I don't know. I'm looking for like, let's get 'Gone with the Wind.' Can we get 'Gone with the Wind' back, please? 'Sunset Boulevard'? So many good movies." (Trump has reportedly previously expressed affinity for Jean-Claude Van Damme action films.)

He continued: "'The winner is from South Korea.' I thought it was best foreign film. Best foreign movie. No -- did this ever happen before? And then you have Brad Pitt. I was never a big fan of his. He got up and gave a little wise guy statement."

The Democratic National Commitee quickly tweeted as Trump spoke: "Parasite is a foreign movie about how oblivious the ultra-rich are about the struggles of the working class, and it requires two hours of reading subtitles. Of course Trump hates it."

The U.S. distribution company for "Parasite," NEON, retorted with its own nod to the film's subtitles: "Understandable, he can't read."

Earlier, Trump honored three veterans of the battle of Iwo Jima. He further emphasized his administration's economic successes, including record-low unemployment and rising wages across the board.

"We are in the midst of the great American comeback," he said. "That's what we're doing. Our country is stronger today than ever before! .. We will land the first woman on the Moon and become the first nation in the world to plant our flag on Mars!"

HUNDREDS CAMP OUT OVERNIGHT AHEAD OF COLORADO TRUMP RALLY

"Crazy Bernie" Sanders and Democrats, Trump said, would "demolish" the economy of Colorado and other key states with their environmentalist policies that would undermine America's energy independence.

Trump joked that, by Democrats' standards, President Obama should have been impeached for falsely and repeatedly claiming that his health care plan would ensure that people could keep their private doctors in all cases.

"We've deported record numbers of gang members ... and we've done more to secure the border than any other administration in the history of our country," Trump said.

Supporters of President Trump cheering as he arrived to speak at the rally. (AP Photo/Evan Vucci)

The line to enter the Broadmoor World Arena started forming Wednesday morning, with people bringing along tents, space heaters and sleeping bags, Fox 21 reported. Overnight and early morning temperatures were in the teens -- but Trump supporters, as they did in New Hampshire earlier this month, braved the cold regardless.

Ahead of his second of three rallies in three days, Trump was exuding reelection confidence Thursday following the Democrats' Vegas prizefight -- and, especially, the perceived weak debut debate performance from Bloomberg, aides and allies said.

At a rope line at the airport after deplaning Air Force One in Colorado, Trump asked supporters how they felt Bloomberg did. As the crowd laughed, Trump remarked, "That wasn't pretty, right?"

When Trump woke up Thursday morning in his gilded Las Vegas hotel, he tuned in to the post-debate coverage and displayed a similar glee, as The Associated Press put it.

Repurposing one of Bloomberg's own quotes about the Democrats infighting, Trump tweeted: "The real winner last night was Donald Trump." He tacked on his own coda: "I agree!"

Speaking in Las Vegas later Thursday, Trump confidently said Stone has a "very good chance of exoneration," even though a judge had just sentenced him to over three years in jail for lying to Congress. Stone was not charged with any criminal conspiracy with Russia or WikiLeaks, however, and his defense team has sought a new trial after the jury foreperson was revealed to be a fierce anti-Trump critic.

The jury forewoman, Tomeka Hart, even posted specifically about the Stone case before she was selected to sit on the jury, as she retweeted an argument mocking people who considered Stone's dramatic arrest in a predawn raid by a federal tactical team to be excessive force.

Trump supporters camping out in advance of the rally in Colorado Springs. (Fox 21 KXRM)

On Wednesday night, after an earlier campaign rally in Phoenix, Trump summoned reporters to his office aboard Air Force One to join him in watching a replay of the debate on the return flight to Las Vegas. His motorcade jammed up traffic for over half an hour as it passed the casino that had hosted the Democrats' debate in the lead-up to the party caucuses in Nevada on Saturday. 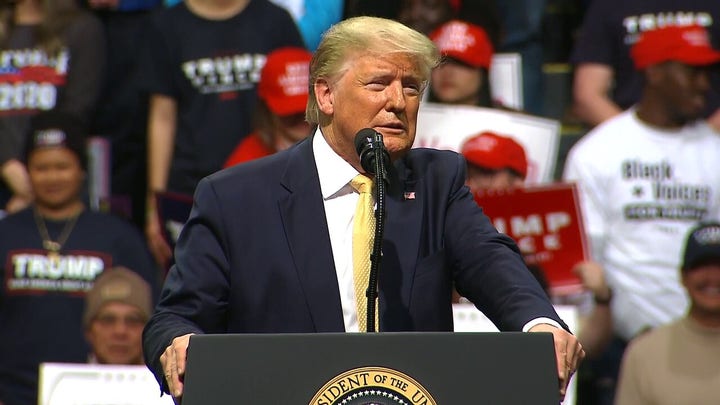 Even as he campaigned, Trump's preoccupation with the Democrats' scrambled nomination race has been clear throughout the trip.

Bloomberg has been the most disconcerting force in the 2020 race for Trump since the ultra-billionaire entered the fray in November and spent over $400 million, which rocketed him in the polls in just three months.

Trump's campaign poll numbers have improved since his impeachment trial wrapped up in January and his campaign has broken fundraising records, raising $60 million in January and $14 million this week in California alone. But, Bloomberg's willingness to spend near-unlimited sums to defeat Trump this fall, and the mocking tone of many of his ads, are said to have rankled the president deeply.

President Trump at the podium for his Thursday night rally. (AP Photo/Evan Vucci)

Trump's campaign had organized itself around the strategy that it would be able to paint any rival as an extreme liberal, a "socialist" or worse, and concerns mounted that strategists would have to come up with a different plan should Bloomberg win the nomination.

Trump's team saw the debate as validating his reelection strategy and providing a fresh opening for Sanders, a self-described Democratic socialist, to gain a significant delegate lead on Super Tuesday. The president was hopeful that panic from more moderate Democrats at Sanders' rise would fracture their party only further.

"We don't care who the hell it is," Trump boasted Wednesday. "We're going to win."

Trump on Thursday placed a round of calls to confidants, echoing the thoughts he had posted on Twitter — at times with more colorful language — and opining that Bloomberg did not appear ready for the moment, two Republicans close to the White House told the AP.

Trump told confidants that the debate proved money alone did not lead to his own electoral success. 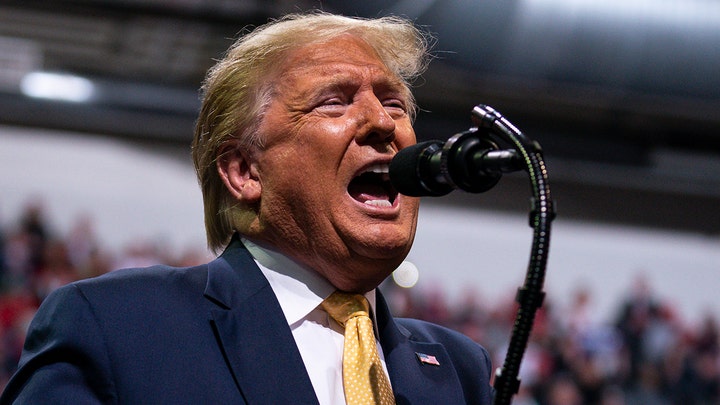 His eldest son echoed the thought as he tweeted during the debate.

"Like a deer in the headlights! Like I said last week Mini, you can’t buy personality or wit and the whole world just saw it," Donald Trump Jr. wrote.

Jody Miller of Scottsdale, Ariz., waiting for an appearance by President Trump at the rally Thursday in Colorado Springs. (AP Photo/David Zalubowski)

Between three rallies and a pair of high-dollar fundraisers, Trump sought to use his western swing to highlight administration policies that delivered on campaign promises and appealed to key demographics.

On Wednesday, he ceremoniously signed new environmental regulations that eased water restrictions on farmers in the heavily Republican California Central Valley. On Thursday, Trump spoke to a graduating class of ex-prisoners in a renewed appeal to communities of color, as he championed his administration’s work on criminal justice reform.

"Your future does not have to be defined by the mistakes of your past," Trump told the graduates, before turning to political topics.

Trump received updates on the debate's opening minutes Wednesday evening moments before he took the stage at a rally in a packed Phoenix arena and promptly delivered his first review.

"I hear he's getting pounded tonight — you know he's in a debate," Trump said about the man he has dubbed "Mini Mike" because of his short stature. "I hear that pounding. He spent $500 million so far and I think he has 15 points. Crazy Bernie was at 30."