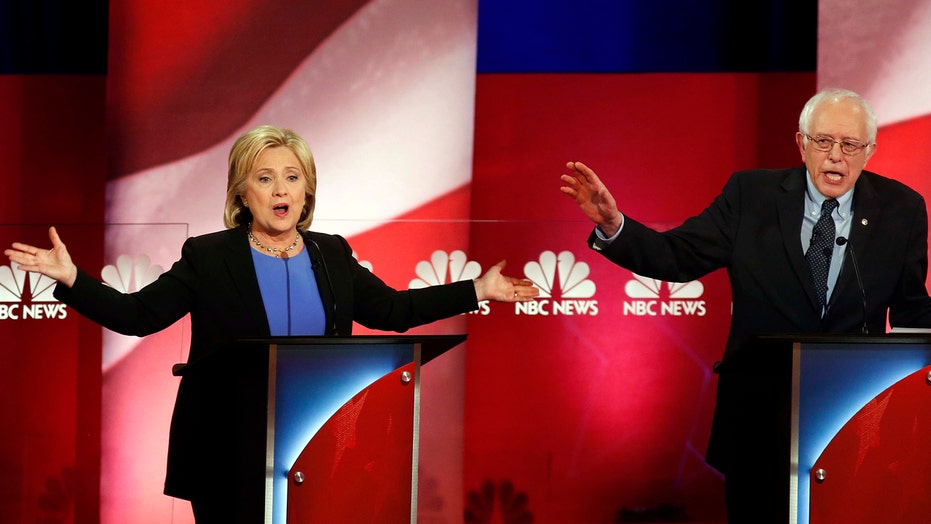 Hillary Clinton sharpened her attacks on insurgent rival Bernie Sanders Sunday night at the final Democratic presidential debate before the Iowa caucuses, accusing him of trying to “tear up” ObamaCare and siding with the gun lobby – as Sanders denied the claims and said he’s the candidate with the “momentum” in the race.

Reflecting a tougher tone on the campaign trail in recent days, the debate in Charleston, S.C., saw Clinton aggressively challenging the Vermont senator’s record in a bid to arrest his rise in the polls. In a throwback to the 2008 race, the former first lady, New York senator and secretary of state also stressed her experience and readiness for the job, while Sanders repeatedly called for “political revolution.”

Highlighting that divide, Clinton slammed Sanders for his universal health plan to offer “Medicare for all,” the details of which were released just hours before the debate. Clinton said she wants to improve on ObamaCare, but accused Sanders of moving to unravel the Obama administration’s signature domestic policy.

Sanders fired back, calling some of Clinton’s criticism “nonsense.”

He said he wants to move to “Medicare for all” in order to provide health care “as a right” and extend insurance to the millions who still don’t have it. His plan calls for an array of tax hikes to pay for it.

As for the existing law, Sanders said, “We’re not going to tear up the Affordable Care Act -- I helped write it.”

The two top-polling rivals, as well as former Maryland Gov. Martin O’Malley, took the stage for just their fourth debate of the season. The debate was hosted by NBC News.

Clinton is stepping up her attacks as she tries to ensure she starts off the 2016 election cycle better than she did in 2008, when she lost Iowa to then-Sen. Barack Obama. But Sanders jabbed at Clinton early on by reminding her Sunday that he’s tightened the race in the first two contests.

“In Iowa, New Hampshire, the race is very, very close,” he said, adding, “We have the momentum.”

Clinton and Sanders also clashed over gun control, with Clinton accusing Sanders of siding with the gun lobby and only recently reversing his stance on a key piece of gun legislation.

“He has voted with the NRA, with the gun lobby numerous times,” Clinton said.

Sanders over the weekend changed his position and backed legislation to reverse a law he once supported that would give gun manufacturers legal immunity. Clinton said she was pleased Sanders had “reversed his position on immunity,” but said the industry has been given a “total pass” so far.

Sanders, though, accused Clinton of being “very disingenuous” on guns. The Vermont senator said he “stood up to the gun lobby” on several fronts.

Clinton, meanwhile, stressed her experience throughout the debate, reminding voters of her time advising Obama in the Situation Room and leading key foreign policy decisions – even defending controversial policies like the “reset” with Russia.

“We need a president who can do all aspects of the job,” Clinton said. “I’m prepared and ready to take it on.”

Sanders, though, called for a “political revolution” that would “transform this country,” urging an overhaul of the campaign finance system he claims has undermined American democracy.

Another pre-debate twist was a spat over Sanders’ medical fitness to be president.

After a recent report claimed a Clinton ally was preparing to seek the 74-year-old Vermont senator’s medical records, the Sanders campaign called the move a “personal” and unfounded attack. The Clinton camp quickly distanced itself from the reported plan – though Sanders on Sunday declared he would release his medical records anyway. The issue did not come up onstage.

Sanders had one seemingly awkward moment at Sunday’s debate, when he didn’t properly hear a YouTube question on police shootings and asked a moderator to repeat it. He then drew applause from the audience by calling for a Justice Department investigation whenever someone is killed in police custody.

The candidates clashed again over Wall Street ties, with O’Malley accusing Clinton of having a “cozy relationship” with Wall Street, while Sanders criticized her for getting hundreds of thousands of dollars in speaking fees from Goldman Sachs.

Clinton responded that O’Malley raised money from Wall Street as head of the Democratic Governors Association. O’Malley countered by saying that he was not using that money for his current campaign.

O’Malley only is polling at about 2 percent nationally and once again was sidelined throughout much of Sunday night’s debate. He frequently protested and tried to interject.

Sanders, though, has emerged as an insurgent candidate with grassroots support, challenging Clinton’s once-presumed lock on the nomination – a situation all too familiar for the candidate who ran in 2008 under similar conditions.

Sanders arguably faces more questions about his electability in a general election than did Obama in 2008 -- and tried to ease those concerns by claiming Sunday that various branches of the Democratic Party would eventually support him. While Clinton maintains her lead both nationally and in vital early-voting Southern states, Sanders has been closing the gap in Iowa and currently leads in most polls in New Hampshire – which votes Feb. 9.

The Iowa caucuses are Feb. 1.

Foreign policy also took center stage Sunday, one day after the Obama administration secured the release of four Americans held in Iran in exchange for seven Iranians. A fifth American also was freed, though officials said that was unrelated to the swap – which coincided with the implementation of key terms of the Iran nuclear deal.

Sanders said Sunday that the U.S. should eventually move to “normalize relations with Iran,” while Clinton seemed to urge more caution.

“We’ve had one good day over 36 years. And I think we need more good days” before moving to normalize relations, she said.