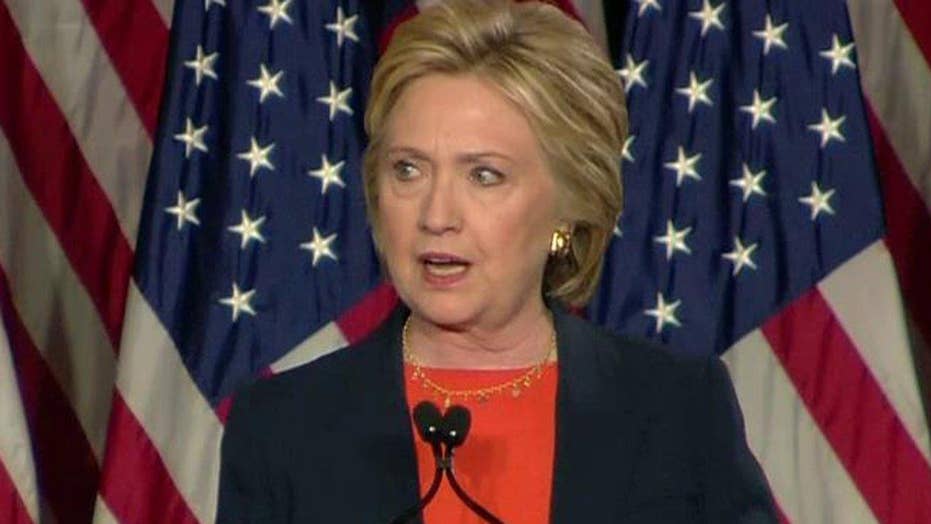 Clinton: Trump likely to lead US into conflict

Hillary Clinton turned what was billed as a major foreign policy speech Thursday into a blistering broadside against Donald Trump – at one point calling him “temperamentally unfit” — while the presumptive Republican presidential nominee used Twitter to provide his own mocking counter-attack, saying, “She doesn’t even look presidential!”

Warning that electing the presumptive Republican presidential nominee would be a “historic mistake,” Clinton painted November’s election as a choice between fear and confidence.

“It’s a choice between a fearful America that is less secure and less engaged with the world and a strong, confident America that leads to keep our country safe and our economy growing,” Clinton said.

In sharpening her attacks on Trump, Clinton also was moving to put the still-ongoing Democratic primary battle behind her. Rival Bernie Sanders, while far behind in delegates, is still vowing to take his challenge to the convention as the candidates prepare for the last major day of primary voting on Tuesday.

In her address, Clinton repeatedly tore into Trump on his foreign policy pronouncements.

Trump was unimpressed by the address, tweeting as Clinton was speaking that she looked unpresidential and was bad at reading from a teleprompter.

Ahead of the speech, he said that as secretary of state, Clinton "has made so many mistakes - and I mean real monsters!"

Bad performance by Crooked Hillary Clinton! Reading poorly from the telepromter! She doesn't even look presidential!

Crooked Hillary no longer has credibility - too much failure in office. People will not allow another four years of incompetence!

In the address, Clinton cited her role in the Iranian nuclear deal, presenting it as one of the successes of the Obama administration, and saying the world is safer than before the agreement.

“We did it without firing a shot, dropping a bomb or putting a single American soldier in harm’s way,” she said.

The former secretary of state noted that Trump had said he would have walked away from the deal, and mocked how his experience as a business mogul might translate as commander-in-chief.

“There’s no risk people losing their lives if you blow up a golf course deal,” she said. “It doesn’t work like that in world affairs.”

Clinton pointedly warned that Trump might lead the country into war "just because somebody got under his very thin skin."

Clinton argued Trump’s foreign policy would isolate the U.S. and that countries like Russia would be celebrating. On the subject of Russia, she noted positive comments the billionaire had made about strongmen such as Russian President Vladimir Putin.

“I will leave it to the psychiatrists to explain his affection for tyrants, I just wonder how anyone could be so wrong about who America’s real friends are,” she said.