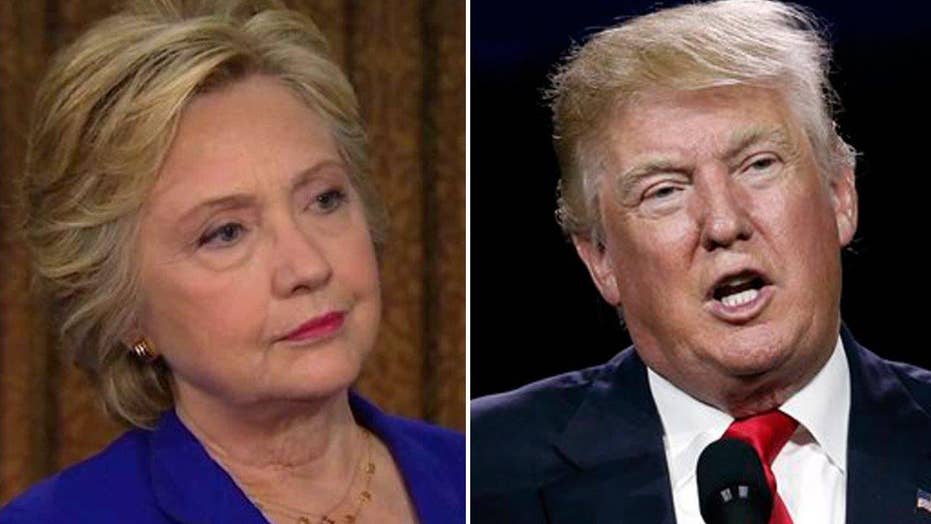 EXCLUSIVE: Hillary Clinton acknowledges that Americans have a legitimate concern about her trustworthiness, particularly related to her email scandal and the Benghazi terror attacks, but criticized those who have attempted to undermine her Democratic presidential campaign and make a “caricature” out of her, in an exclusive interview with “Fox News Sunday.”

“I think that it's fair for Americans to have questions,” Clinton said, in an interview taped Saturday. “Every time I run for an office, though, oh my goodness, all of these caricatures come out of nowhere. And people begin to undermine me because when I left office as secretary of state, 66 percent of Americans approved of what I do.”

According to a Gallup poll cited by Poltifact, Hillary Clinton had a favorability rating of 64 percent when she left her role as secretary state in February 2013. Her rating declined following criticism over the deadly attack of the U.S. Consulate in Benghazi and her handling of emails while at the State Department.

On the issue of two-thirds of Americans having concerns about her trustworthiness, Clinton repeated what she has often said, “I know that I have work to do.”

In the wide-ranging interview with Fox News’ Chris Wallace, Clinton said that evidence shows that the government of Russian President Vladimir Putin hacked into Democratic National Committee emails and appeared to time their damaging release to her party’s nomination convention last week.

She stopped short of saying that Putin wants Republican nominee Donald Trump, who has “praised” Putin, to win the White House.

However, Clinton, in her first interview since she accepted the presidential nomination Thursday, said the Putin government appears to have made a “deliberate effort to try to affect the election,” which “raises national security issues.”

On the issue of the Benghazi terror strikes, Clinton denied telling family members of people killed in the Sept. 11, 2012, incident on a U.S. outpost in Benghazi, Libya, that the attack was sparked by an anti-Islam video and was not terrorism.

She instead suggested the family members misunderstood her because they were overwhelmed by grief.

“I understand the grief and the incredible sense of loss that can motivate that,” Clinton said. “As other members of families who’ve lost loved ones have said, that's not what they heard. I don't hold any ill feeling for someone who, in that moment, may not fully recall everything that was or wasn't said.”

Clinton again said she “made a mistake” by using a private server system to send and receive official emails when she was secretary of state. But she held firm that she did not communicate classified information and appeared to shift the blame onto the roughly 300 people with whom she communicated via email.

“I relied on and had every reason to rely on the judgments of the professionals with whom I worked,” Clinton said. “So in retrospect, maybe some people are saying, ‘Well, those -- among those 300 people -- they made the wrong call.’ At the time, there was no reason, in my view, to doubt the professionalism and the determination by the people who work every single day on behalf of our country.”

She also disagreed with the assertion that FBI Director James Comey, at the conclusion earlier this summer of the agency’s investigation into the matter, said she misled the public when she said she never transmitted classified information.

“That's not what I heard Director Comey say,” Clinton said. “Comey said that my answers were truthful and what I've said is consistent with what I have told the American people.”

In an appearance earlier this month before the House Oversight and Government Reform panel, FBI Director James Comey told lawmakers, “there was classified material emailed,” in response to questions about Clinton’s use of a private email server while she was secretary of state.

Rep. Trey Gowdy, R-S.C., asked the FBI director: “Secretary Clinton said there was nothing marked classified on her e-mails, either sent or received. Was that true?”

In a press briefing prior to his House testimony, Comey said, “Although there is evidence of potential violations of the statutes regarding the handling of classified information, our judgment is that no reasonable prosecutor would bring such a case.”

In the "Fox News Sunday" interview, Clinton, who is in a close race with Trump for the White House, also said that she would not attempt to overturn the Supreme Court’s ruling on Second Amendment rights, instead urging Congress to enact tighter gun-control measures.