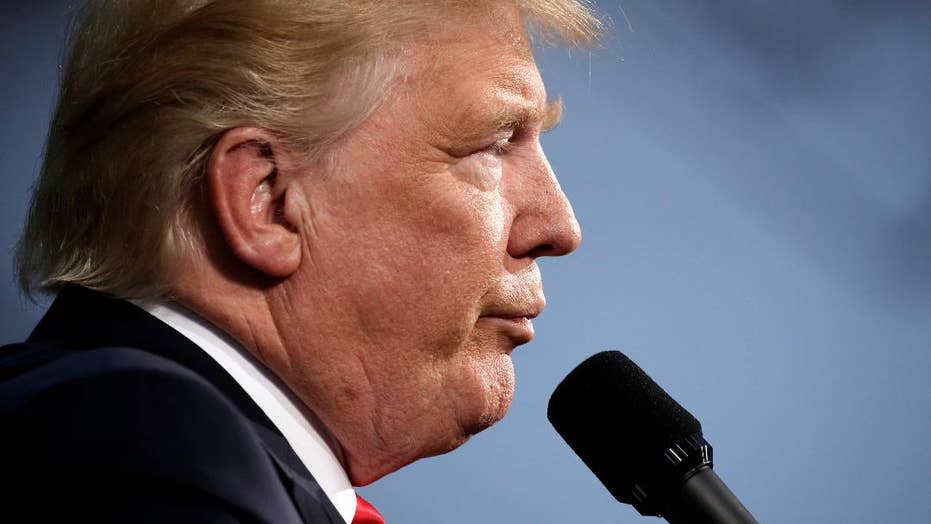 Napolitano: Can President Trump pardon himself?

Judge Andrew P. Napolitano breaks down whether or not President Trump can pardon himself and what would happen if he did.

President Trump said he does have a right to pardon himself, but maintained he is innocent of any wrongdoing.

"As have been stated by numerous legal scholars, I have the absolute right to PARDON myself, but why would I do that when I have done nothing wrong?" Trump said in a June 4 tweet, saying the Russia investigation "continues into" the midterm elections.

Trump first gave constitutional scholars a reason to engage in what one called their “favorite parlor game” – arguing over whether a president can self-pardon – with a tweet last year.

“While all agree the U.S. President has the complete power to pardon, why think of that when only crime so far is LEAKS against us,” Trump tweeted in July 2017.

The Washington Post reported last year that the president had been asking advisers about his ability to pardon aides, family members and himself as special counsel Robert Mueller’s investigation into possible collusion with Russia during the presidential election continued. Rudy Giuliani, one of Trump's attorneys, has said Trump "probably" has the ability to pardon himself but doesn't plan to do so.

Whether a president has the ability to issue a self-pardon is a favorite topic for lawyers to debate as there is really no clear resolution, Jonathan Turley, a legal scholar and law professor at George Washington University, told Fox News.

Read on for more on the debate.

A president could make a ‘good-faith’ case for self-pardon

Turley has argued in multiple columns and on his own blog that while the Constitution should bar self-pardons, it doesn’t.

“The language of Article II is quite explicit in giving the president a pardon power over federal offenses with the only exception related to impeachments. Donald Trump can certainly make a good-faith textual case for the right to self-pardon,” Turley told Fox News.

Turley added that he objects to those “who are claiming clarity” in the argument.

“The fact that there is no clear answer after so many debates reflects the difficulty of the question,” he said. “The text would seem to support a self-pardon while there are good-faith arguments that it would contradict underlying values of the constitution.”

And while he said that it shouldn’t work, Michigan State Law professor Brian Kalt argued on his blog that a president “can certainly try” to self-pardon.

“The reason for uncertainty is that no president has ever tried to pardon himself, so no court has had the opportunity to decide the question,” Kalt said. “Until a president purports to pardon himself, and until a federal prosecutor tries to prosecute him anyway, we cannot know what the courts think about this.”

A presidential self-pardon ‘should not be regarded as valid’

While a court hasn’t ruled on the constitutionality of self-pardons, the answer is pretty evident, according to Richard Primus, a legal scholar and law professor at the University of Michigan.

“I think it’s pretty clear that there’s a right answer, and that answer is self-pardon should not be regarded as valid. A power to self-pardon would violate the basic rule-of-law principle that no person should be allowed to adjudicate his own case,” Primus told Fox News, adding that a pardon “by its nature might require two parties.”

Richard Painter, a law professor at the University of Minnesota and former White House ethics lawyer for President George W. Bush, told Fox News that the definition of the word “pardon” gives him pause when it comes to the idea that a president can self-pardon.

“What drives my view is the meaning of the word pardon – forgiveness, to forgive someone else,” he said.

WHO IS JACK JOHNSON AND WHY WOULD TRUMP PARDON HIM?

Painter said that giving the president the ability to self-pardon could allow for him to “commit any crimes he wanted in office” and then pardon himself before he left office.

“Why in the world would the Founders want that in the constitution,” Painter said.

Kermit Roosevelt, a University of Pennsylvania law professor, agreed that the president doesn’t have the authority to pardon himself, citing “the rule against political self-dealing.”

“Constitutional silence about something so obviously problematic should be read to indicate it’s not allowed,” Roosevelt told Fox News.

He said it’s “unlikely” that the Supreme Court would take up the issue.

“The only way that could happen would be if the president did try to pardon himself (unlikely in my view) and then a prosecutor indicted him (also unlikely, at least until he’s out of office) and then the president raised the pardon as a defense,” Roosevelt added.

Should a president self-pardon?

While constitutional scholars might disagree on the legality of self-pardons, Turley said that all should be able to agree on one point – “self-pardons are inherently abusive and ignoble.”

“No president in history has used this power to pardon himself – not Andrew Johnson, not Richard Nixon, not Bill Clinton. It would be a truly ignoble, historical moment for Donald Trump to use this type of power,” Turley said.

“The abiding rule, repeated many times, was that ‘the president is not above the law,’” Woodard told Fox News. “By that, I think that official power might have been legal – but it proved to be politically suicidal.”