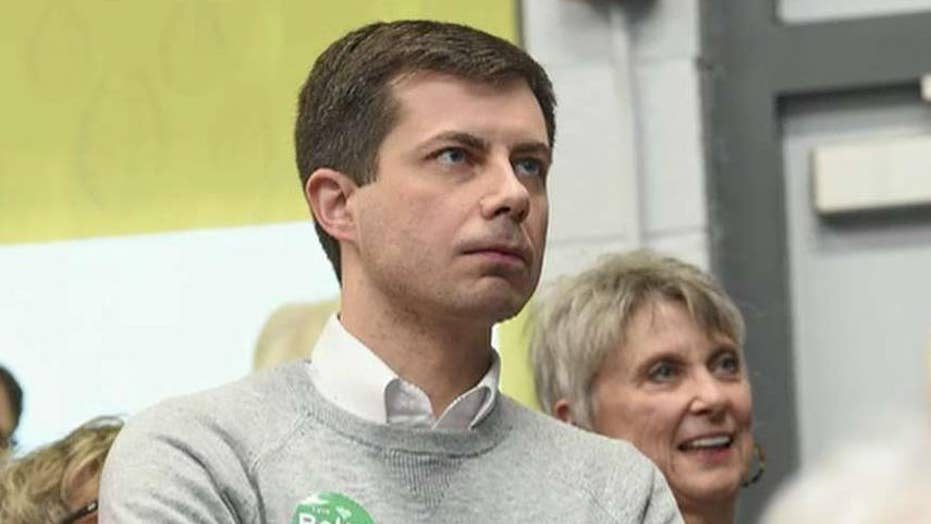 MANCHESTER, N.H. – Pete Buttigieg highlighted his youth and his outside-the-Beltway experience as he contrasted himself with some of his rivals for the Democratic presidential nomination on Friday night. This, as he campaigned in the state that holds the first primary in the race for the White House.

In an interview with Fox News as he arrived in New Hampshire, the South Bend, Ind., mayor touched on a controversy surrounding one prospective rival, former Vice President Joe Biden, who has been accused of inappropriate touching by several women.

He said it’s “not my place” to question whether the Biden dust-up should disqualify the as-yet undeclared rival from running for the White House. But he added that “I do think it’s important that he’s addressing it and I’ll leave the rest to him.”

Buttigieg spoke as he was in New Hampshire for the first time in nearly a month, this time as a candidate on the move.

Thanks to tons of media buzz and coverage on the cable news networks, a surge in the crowds on the campaign trail, and an impressive fundraising haul, he’s gone from a longshot aspirant to a legitimate contender for the Democratic nomination.

Before addressing the capacity crowd of nearly 300 inside Manchester’s Currier Museum of Art, Buttigieg spoke to a large overflow crowd standing outside. His campaign moved Friday night’s event from a smaller venue to the museum after receiving a larger-than-expected response by voters hoping to see the candidate.

The 37-year old contender – the youngest in the field of 17 Democrats running for president – is an Afghanistan War veteran who would become the nation’s first openly gay president if he unseats President Trump next year.

“I’m probably not what you’re thinking for a presidential candidate,” he told the audience.

And, taking a not-so-veiled shot at some of his rivals, he repeated an often used line on the campaign trail, saying he hasn’t “come to this by marinating in Washington for a couple of decades.”

Asked by Fox News during a gaggle with reporters if his comments were aimed at Biden, who’s 76, and the other frontrunner in the race, 77-year old Sen. Bernie Sanders of Vermont, Buttigieg said “we certainly represent something that’s not like the others and you can see the energy from people of all generations around the idea of a campaign that’s focused on the future.”

A day ahead of his arrival, Buttigieg appeared to draw a line between himself and Sanders when asked on a local radio show about how he differentiated himself from the candidate who describes himself as a Democratic socialist.

Buttigieg said, “I guess I’d describe myself as a Democratic capitalist. I believe in capitalism. I cut my teeth in the business community.”

But he added that “when you have increasing large corporate players using money to purchase power, it begins eroding our democracy. And that Democratic part of Democratic capitalism is extremely important.”

Buttigieg told Fox News on Friday that those comments were “not a shot at anybody.”

But he said his message to Sanders supporters is that “they should look at my progressive record and what I have to say about where the country is elected.”

A number of local Sanders supporters attended the Buttigieg event. The senator – who crushed Hillary Clinton in the 2016 New Hampshire primary – remains popular in the state.

Of his recent momentum, Buttigieg said he's not letting it go to his head.

“We still have a long way to go before I’m a household name, let alone where we can say we’ve consolidated our support. It’s heady and it’s exciting seeing this kind of attention, but I’m under no illusion that we’re even a fraction of the way of getting known and getting our message,” he cautioned. “We’re very mindful that these are the early stages.”