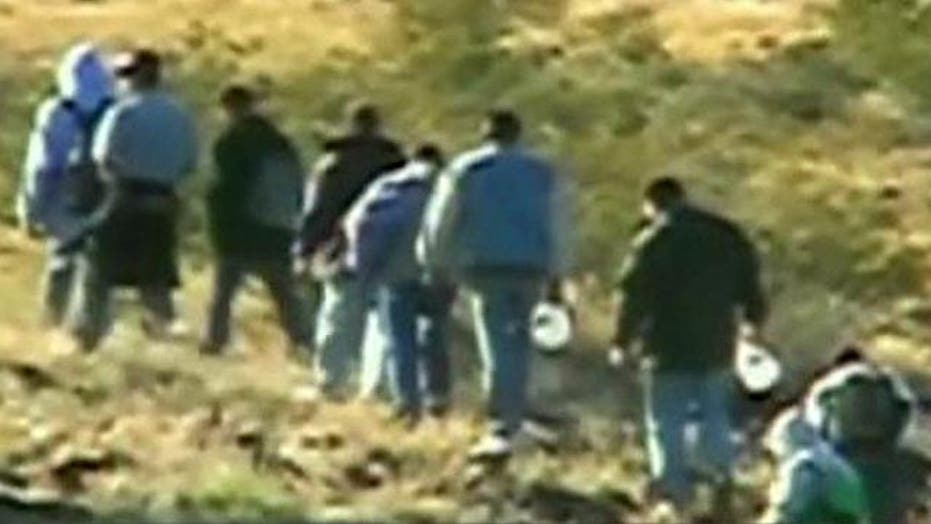 Documents show surge of illegals slipping across the border

Contrary to the Obama administration's claim the border has never been more secure, high-ranking Border Patrol officials in Texas are considering the need for a "tent city" because of a surge of illegal immigrants in the Rio Grande Valley.

The wave of illegal immigrants, many from Central America, appears to be an unintended consequence of the debate raging in Washington over an immigration bill. In interviews after being apprehended, immigrants say federal budget constraints and expected amnesty or legalization for those already living here make it a no-lose proposition.

"We've seen a 500 percent surge in the amount of activity from August to December of last year," Janice Kephart, of the Washington-based Center for Immigration Studies, told Fox News.

Whereas people caught crossing illegally near the Mexican border once opted simply to be turned back, they now increasingly are invoking their right to a hearing, federal sources told Fox News. The reason is twofold: Budget cuts mean they are unlikely to be held pending their appearance, and they also think establishing a paper trail of their presence in the U.S. will help when the debate in Washington ends.

Border Patrol sources told Fox News the newest illegal immigrants have nothing to fear from being caught.

“With the knowledge of immigration reform, you will -- and are -- seeing a huge flow of illegals hitting the Southern border looking to stay caught,” a Border Patrol source told Fox News.

Another said, "Central Americans and South Americans are flooding the system asking for hearings knowing immigration reform/amnesty is coming."

Last month, the Department of Homeland Security, which oversees ICE and the Border Patrol, announced it was freeing thousands of non-criminal illegal aliens from detention facilities, allowing them to remain in the U.S. while awaiting their hearings. But the source told Fox News that the “notice to appear” they are issued is derisively referred to as a “notice to disappear.”

Lawmakers on both sides of the aisle are trying to reach agreement on a policy that could allow some illegal immigrants to remain in the U.S., while simultaneously discouraging continued border crossings. But the debate, along with the automatic budget cuts prompted by a mandatory action known as sequester have made the process - and its vulnerabilities - transparent. Interviews with illegal immigrants caught near the border indicate that Mexican media outlets have informed the public of about immigration reform and possible furloughs of U.S. government workers. Those are motivating factors.

Border Patrol sectors had mixed reports for last year, with some showing increases in the flow north and others decreases. But sources said the numbers have spiked dramatically in recent months - coinciding with ICE’s new “catch and release” policy and the budget cuts that make detention a more remote possibility.

"Not sure if you saw our last detention report, but we have approximately 700 [illegal immigrants] ready to go and another 1,000 unprocessed,” read one. "We have been at emergency levels for a while and we are now entering critical mass."

Another email was even more emphatic.

“We need to take a hard look at a tent city and maybe even broach the subject with [DHS] Secretary [Janet] Napolitano when she is here,” it read. “Our agents and stations need relief as soon as possible."

A statement from Customs and Border Protection said adequate resources are being applied to secure the border.

"Under this administration, DHS has dedicated historic levels of personnel, technology and resources to the Southwest border," read the statement, adding that the agency has more than doubled the number of agents in the last decade. "Additionally, CBP continues to deploy proven, effective surveillance technology tailored to the operational requirements along the highest trafficked areas of the Southwest Border."

The statement said that apprehensions by the Border Patrol were at or near historic lows in fiscal 2012, which ended in September. Figures were not available for the past six months, in which new factors have arisen that critics say is spurring the current wave.

Kephart said the newest illegal immigrants know just what they are doing, as Congress moves closer to a bill that would grant some measure of amnesty to those already in the U.S.

"Everybody talks about the magnet of jobs. The other magnet people are talking about is amnesty,” said Kephart. “That politically is a huge motive for people to try to get here just in time to make it through that process."