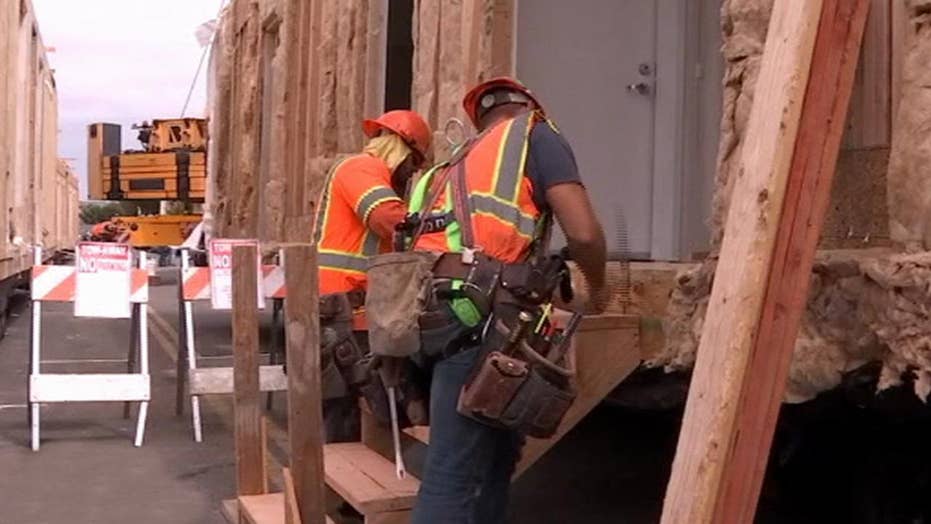 It’s a good time to be a construction worker.

President Trump’s immigration crackdown – and a booming economy – are both leading to an unforeseen complication in the labor market: a big shortage of workers in the construction industry. In a recent survey, the Associated General Contractors of America found about 80 percent of construction firms are having a tough time filling positions, including 44 percent who have recently been forced to raise their prices. And nearly one in three firms report longer-than-average wait times and delays because they have more hammers than hands.

Skilled workers are especially in need, including bricklayers, installers, pipelayers, and carpenters. Now a lot of real estate developers are reporting similar issues, and the President’s hard-line stance on immigration could be to blame. They say the majority of their workers are immigrants, and stricter policies by the Trump Administration are having a big impact on their labor pool.

Dan Kodsi is the C.E.O. and developer of Paramount Miami Worldcenter, the world’s most heavily amenitized luxury residential tower.  It’s currently the biggest private construction project in America. He told us the immigration crackdown “has actually created a void, we have more construction jobs available than we actually have workers."

The administration has been somewhat responsive to the issue, helping to push through legislation aimed at improving vocational training in order to build the type of 21st century workforce America’s construction industry will need.

Paramount Miami Worldcenter is taking full advantage of those programs, and Kodsi has partnered with the City of Miami to recruit and train hundreds of unemployed workers. The hope is to provide enough construction crews for the Miami area for years to come. "At Miami Worldcenter, we actually have a jobs program,” says Kodsi. “This is a public-private partnership where we created vocational schools where we can take unskilled workers, these workers can come in and gain skills."

But immigration policy is only partly to blame for the worker shortage. Another big factor is the economy, with unemployment down to a 50-year low. Economic growth, especially in real estate, is outpacing the available workforce. In other words, developers have more projects than people to build them.  And as experienced workers age out of the workforce, they’re not being replaced by young people, who are gravitating more toward tech jobs than construction and other trades. It’s a “perfect storm” that’s not expected to change any time soon. Benjamin Rivera with the Sheet Metal Workers Local 104 in Oakland, California, says “we have constant calls on the books from our contractors. It’s a good problem to have, but at the same time, contracts need to be fulfilled."

Ultimately, industry groups say the White House needs to focus on increasing funding for job training programs, and allow more skilled immigrants to work in the U.S. while also continuing to pursue pro-growth economic policies. Kodsi suggests a new type of visa aimed at filling construction jobs on a temporary basis. "Are there solutions to create some type of programs, temporary visas, something that allows immigrants, or skilled immigrants especially, to come in to the United States, fill the void?"

And those jobs will have some security as well. The Labor Department forecasts the construction industry will need at least 750,000 additional workers by 2026, hoping to build a new workforce for a new American economy.