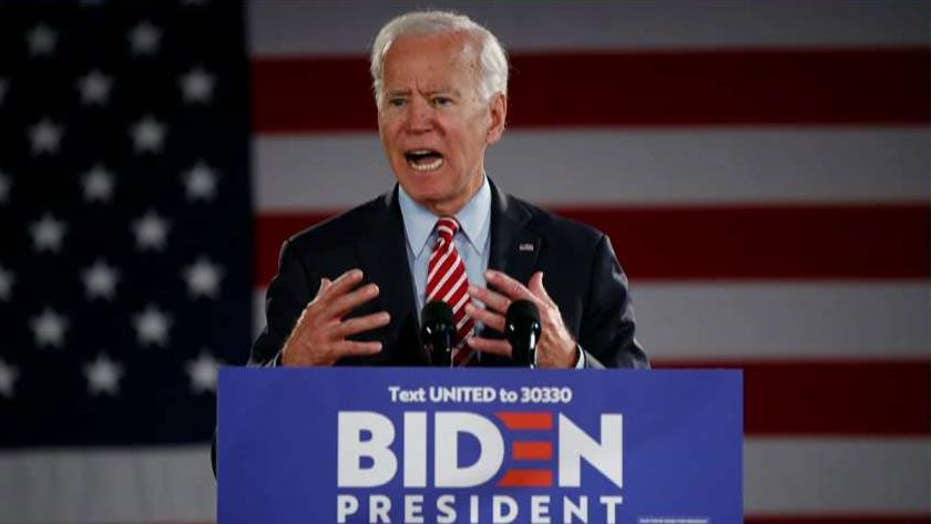 The latest polls indicate that Joe Biden is in a battle right now for Iowa and New Hampshire – the first two states to vote in the presidential primary and caucus nominating calendar -- with top-tier rivals Elizabeth Warren, Bernie Sanders and Pete Buttigieg.

But two new public opinion surveys in South Carolina – the first Southern state to vote in the race for the White House - shows the former vice president holding a large lead over his rivals for the Democratic nomination.

Biden – he has deep ties to South Carolina -- stands at 33 percent among likely Democratic primary voters in the Palmetto State, according to a Quinnipiac University survey released Monday. Warren, the Massachusetts senator, is a distant second – at 13 percent  -- with Sanders at 11 percent and Buttigieg at 6 percent.

And Biden stands at 36 percent among likely South Carolina Democratic primary voters in a University of South Florida survey, with Sanders and Warren tied for second at just 10 percent.

Hedge-fund manager turned billionaire environment and progressive grassroots advocate Tom Steyer stands at 5 percent in the poll, with tech entrepreneur Andrew Yang at 4 percent, Sen. Kamala Harris of California at 3 percent, and Sen. Cory Booker of New Jersey at 2 percent. Everyone else in the large field of Democratic White House hopefuls registers at 1 percent or less.

Among black voters – a majority of Democratic presidential primary voters in South Carolina – Biden stands at 44 percent. Sanders, the Vermont senator, is second at 10 percent, with everyone else registering in single digits.

The poll indicates Biden’s the most favorably viewed of all the candidates, with a 71 percent-18 percent favorable-unfavorable rating. The former vice president’s plus-53 net favorability rating is 17 points higher than Sanders and 22 points higher than Warren.

The poll’s release comes days after former Massachusetts Gov. Deval Patrick jumped into the race, and amid speculation that former New York City Mayor Mike Bloomberg is poised to launch a presidential bid.

Snow noted that Patrick “has his work cut out for him in introducing himself to voters. Nearly 8 in 10 likely voters say they haven't heard enough about Patrick to form an opinion of him.”

“More likely voters are familiar with Michael Bloomberg, the former New York City mayor contemplating a run, as roughly 5 in 10 haven't heard enough -- but voters that have an opinion view him more unfavorably than favorably," she added.

And Snow pointed out that “where South Carolina is similar to other early states: choices are not set in stone. Roughly 4 in 10 of likely Democratic primary voters say their minds are made up.”

BUTTIGIEG SURGES TO THE TOP IN A NEW IOWA POLL

The Quinnipiac poll was conducted Nov. 13 through Sunday, with 768 likely South Carolina Democratic primary voters questioned by live telephone operators. The survey’s margin of error is plus or minus 4.8 percentage points.

The Public Opinion Research Lab at the University of North Florida poll was conducted Nov. 5-13, with 436 likely Palmetto State state Democratic primary voters questioned by live telephone operators. The survey's sampling error is plus or minus 4.7 percentage points.

Steyer was in fourth place - at 8 percent - in the poll - with Harris at 4 percent. Buttigieg stood at 3 percent, and Booker at 2 percent, with everyone else at 1 percent or less.