President Biden has ended the national emergency declaration at the border put in place by President Donald Trump in 2019 -- although 3,600 troops will remain in place until the end of the fiscal year.

The White House released a letter from Biden to Speaker Nancy Pelosi to notify Congress that he had reversed the 2019 declaration. The move was largely a formality as Biden, on his first day in office, had ordered a halt on construction of the wall at the southern border.

Trump had declared a national emergency in Feb. 2019 amid a stalemate over wall funding and months before a brewing border crisis exploded in the Spring and Summer. The declaration allowed him to shift billions of dollars in funding to the project -- of which 450 miles were built by the end of his administration.

But the Pentagon on Thursday said that the 3,600 troops deployed to the border will stay there until the end of the fiscal year in September as they support the Department of Homeland Security and Customs and Border Protection (CBP).

Pentagon spokesman Lt. Col. Chris Mitchell told Fox News the troops would continue to provide support in the areas of aviation, maintenance, detection and monitoring, logistics, transportation, and mobile surveillance camera operations. They were not helping with border wall construction.

A separate mission in response to the pandemic saw 600 troops deployed to help DHS/CBP provide operations for an additional 60 mobile surveillance sites to detect illegal migration between ports of entry. That support is approved through Mar. 31. Both movements were first reported by Politico.

The Pentagon says it has spent nearly a billion dollars on the southern border mission since 2018 -- a total of $939 million, which does not include FY21, which began in Oct. 2020 and ends in September. 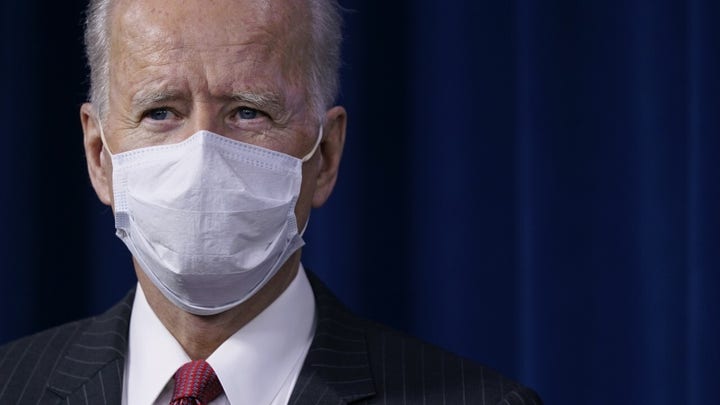 Biden’s letter described the Trump-era declaration as "unwarranted" and noted that he had ordered a review of all the money spent on the border wall project so far.

The wall, a central campaign promise for Trump in both 2016 and 2020, was fiercely opposed by Democrats. While Trump officials and agents at the border frequently spoke of the need for a wall in order to curb illegal immigration, Democrats called it unnecessary and cruel, and Biden promised that "not another foot" would be added under his administration.

It’s one of a number of Trump-era policies Biden has reversed. He has also sought to provide a pathway to citizenship for millions of illegal immigrants and his administration has moved to slap a 100-day pause on deportations -- although that has been blocked in response to a Texas lawsuit.

Republicans have warned that such moves are encouraging more illegal migration, and have pointed to increased apprehensions at the border in what they see as a potential border crisis similar to that seen in 2019.

The White House on Wednesday warned potential migrants that "now is not the time to come"and said that "the vast majority of people will be turned away."