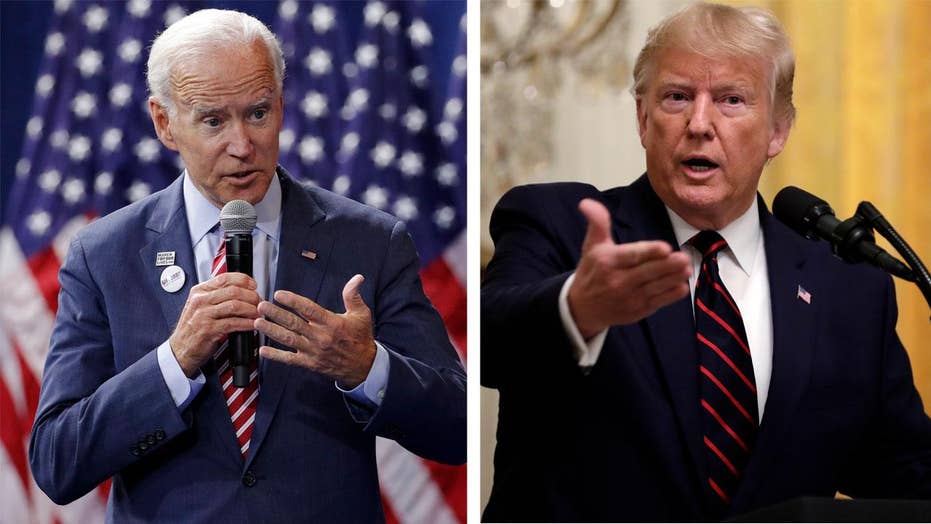 The former vice president responded by saying that President Trump has no evidence behind his claims that his family is ‘stone-cold crooked.’

Onetime Vice President Joe Biden, a frontrunner in the Democratic presidential primary, responded on Wednesday to President Trump calling him and his son Hunter “stone-cold crooked,” calling for the focus to remain on alleged misdeeds by Trump that have sparked a House impeachment inquiry.

“Biden and his son are stone-cold crooked. And you know it,” Trump told reporters Wednesday during a joint press conference with the president of Finland. Trump was referring to allegations that he pressed Ukraine's leader in a July phone call to investigate Biden, his son Hunter and their business dealings in that country.

Referencing Hunter Biden's board seat with a Ukrainian firm despite a lack of experience, Trump said: "His son walks out with millions of dollars. And the kid knows nothing."

“Look," Biden said, "the issue is this president of the United States engaged in something ... which at minimum gives a lot of running room for the Russian and Ukraine. I think we should just focus on he's the issue.

"Nobody has ever asserted that I did anything wrong except he and what’s that fella’s name, Rudy ‘Hudy’... Giuliani. That’s it,” Biden continued, referencing Trump's personal attorney, former New York City Mayor Rudy Giuliani, who like Trump has alleged Biden misdeeds in Ukraine.

Biden said he’d like to get back to talking about guns and lethal gun violence in America, since Trump hasn’t done “anything rational relating to guns.”

“I know he did have time for one meeting. [NRA head] Wayne LaPierre spent some time with him, in return, I suspect for help in his impeachment proceeding,” Biden continued.

A New York Times report on Friday alleged LaPierre promised financial support for the president’s defense in upcoming political fights over impeachment if Trump would “stop the games” on gun control legislation. The NRA has denied its chief executive had any such conversation with the president.

Trump has been accused of freezing military aid for Ukraine over the summer, then using the money as leverage to spark an investigation of the Bidens' business arrangements in that nation. A whistleblower complaint has kicked off a House impeachment inquiry, looking at whether the president might have, in this fashion, encouraged foreign meddling in the 2020 election to undermine the former vice president, a leading Trump rival.

The president has vehemently denied any wrongdoing, calling the inquiry an effort by Dems, who control the House, to win 2020 via impeachment.