The 2020 Democrat frontrunner is defending remarks he made on working with segregationist senators in Congress after coming under fire from Sens. Cory Booker and Kamala Harris; Peter Doocy reports.

Former Vice President Joe Biden is facing renewed scrutiny about his stance on the death penalty amid a re-surfaced video from the '90s in which he boasted that sweeping crime legislation he helped write did “everything but hang people for jaywalking.”

The 2020 presidential hopeful is struggling to thread the needle between embracing his decades-long experience in the Senate, where he gained a reputation as a centrist Democrat, and connecting with a party base that has moved increasingly left on numerous issues including law and order.

On top of controversial remarks this week over his past work with segregationist senators, comments talking up the 1994 crime bill risk exposing the primary front-runner as out of step with modern-day Democrats.

In the 1992 remarks, Biden was trying to battle accusations that the bill was “weak” on crime.

“Let me tell you what is in the bill, and I’ll let you all decide whether or not this is ‘weak,’” he said.

“It provides 53 death penalty offenses, as weak as can be, you know? We do everything but hang people for jaywalking in this bill -- that’s weak stuff,” he said sarcastically.

The video was published online by the Republican National Committee, which is eager to stoke a bruising Democratic primary battle.

The clip speaks to yet another policy position where Biden may be shifting.

Amid widespread rejection of the death penalty by other 2020 primary candidates and criticism over the 1994 crime bill, Biden this month appeared to soften his stance on the death penalty. Politico reports that in New Hampshire this month, while defending the crime bill, he advocated for criminal justice reforms and highlighted his work during the Obama administration to cut the federal prison population.

“By the way, congratulations to ya’ll for ending the death penalty here,” he added.

Politico notes that as recently as 2000, Biden said that “I support the death penalty” but added that “you had better go out of your way to make sure you don’t execute an innocent person.”

Biden could face pressure to modify his stance further amid a primary field packed with candidates calling to abolish the death penalty, give the vote to felons, and shorten prison sentences as part of criminal justice reform.

Biden already has faced criticism as he changed his stance on the Hyde Amendment that prevents federal funds being used for abortions. 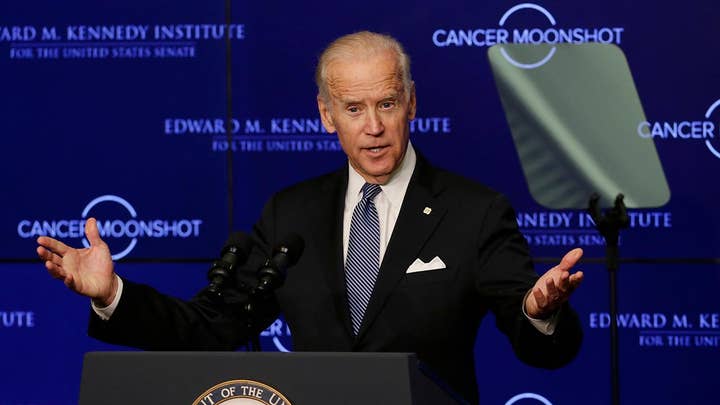 And this week, he faced a firestorm over comments he made about being able to work with segregationist Democrats and get “things done,” as he warned fellow Democrats about the importance of working with people with whom they disagree.

He brushed off calls from other 2020 hopefuls for him to apologize, saying there's “not a racist bone in my body.”

That has, in turn, brought renewed attention to his 2003 eulogy for Strom Thurmond, the former South Carolina senator and “Dixiecrat” presidential candidate who supported segregation.

In the eulogy more than 15 years ago for Thurmond, who later became a Republican, Biden said that while their “differences were profound,” he got to know him and “watched him change, oh so subtly.”

“I went to the Senate emboldened, angered and outraged at age 29 about the treatment of African-Americans in this country, about everything for a period in his life Strom represented. But then I met the man,” Biden said at the time.

Biden will travel to South Carolina on Friday to make appeals to African-Americans. He is scheduled to meet with black leaders behind closed doors.

Then on Saturday, he will speak to abortion rights activists at a Planned Parenthood forum, where he is likely to clarify his switching stances on the Hyde Amendment.