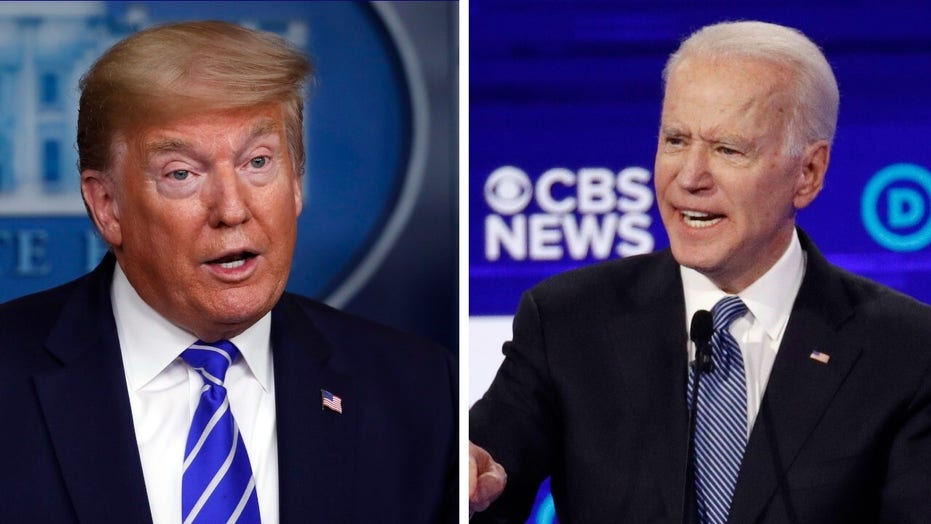 With just over six months to go until November’s general election, new polling in the crucial states that will decide the presidential contest gives Democratic challenger Joe Biden the upper hand over President Trump.

But looks can be deceiving.

The former vice president and presumptive Democratic nominee enjoys 8-point leads over the Republican incumbent in the White House in new Fox News polling in Michigan and Pennsylvania. Those two states – along with Wisconsin – were part of the quarter-century-old blue wall that Trump painted red four years ago, helping him upset 2016 Democratic nominee Hillary Clinton to win the White House.

THE LATEST 2020 POLL FROM FOX NEWS

And Biden also holds a low single-digit edge over the president in new surveys by Fox News and Quinnipiac University in Florida, the biggest battleground state in the presidential race. Former President Barack Obama narrowly captured the Sunshine State in the 2008 and 2012 elections, but Trump edged Clinton by 1.2 percent to win the state’s 29 electoral votes four years ago.

But rewind four years and nearly all the surveys at this time in the 2016 election cycle in many of those crucial states indicated Clinton ahead of Trump -- some by even more.

Clinton was ahead of Trump by 10 points in Michigan in the Real Clear Politics average at this time in 2016, and by nearly 5 points in Florida. The average Biden lead in those states today is 5.5 points and 3.2 points, respectively.

“Don’t get all twisted in knots in about this current polling because it’s really not all that different than what we saw four years ago in the Hillary vs. Trump matchup. So six months out it’s hard to take it all that seriously,” veteran GOP pollster Neil Newhouse told Fox News.

Florida was a different story – eventually tightening until the two standard-bearers were basically tied heading into Election Day 2016.

Anzalone took aim at the comparison to the Clinton-Trump 2016 race.

Anzalone also pointed to Biden’s net favorability in the polls – in comparison to the president – who’s underwater on that question in the surveys. And he compared Biden’s positive numbers with Clinton’s net unfavorability during the 2016 cycle.

Newhouse – who was Mitt Romney’s pollster in the 2012 presidential campaign – noted that current polling is heavily influenced by the coronavirus pandemic.

“Because of the coronavirus situation and the focus on Trump as he does his daily news conferences, these numbers reflect what we don’t want this race to be, which is a referendum on Donald Trump. That’s all this is, because truthfully Joe Biden’s been absent to me,” he emphasized.

Newhouse acknowledged that “in a referendum right now on Donald Trump – as we saw in the 2018 midterm elections – we don’t score well there.”

But he forecast that “when we get through to the other side of this and we get back into campaign mode and voters begin to focus on the choice between Trump and Biden, then I think we’re going to be in better shape.”

Chris Anderson – a longtime Boston-based pollster who's the Democratic partner on the Fox News Poll and a member of the Fox News Election Decision Team – said that depending to “the degree to which coronavirus is still the dominant issue in the fall,” public opinion on the president’s handling of the crisis “could create quite a liability for him.”

While presidential elections with an incumbent running for a second term are often a referendum on the sitting president and his record, Newhouse pointed to the 2012 showdown and spotlighted that “it’s not always about the incumbent.”

“Look at what Obama did to Romney,” he noted, pointing to the massive effort by Democrats to define the GOP nominee.

BIDEN, TRUMP,  SPAR ON WHO'S TOUGHER ON CHINA AMID CORONAVIRUS CRISIS

But Anderson disagreed, saying that the president’s style “cries out for everything to be all about him."

“I haven’t seen any public health experts optimistic that coronavirus is not going to be a major issue by the fall so I think it’s going to be a real challenge for Trump to make it all about anything other than the coronavirus,” he stressed. “The way that he has governed and led has driven up his unfavorable number to a degree which was not the same with Obama.”